The Commodore Review: How Vanderbilt Really Looked in Their 52-24 Win Over UAB

Vanderbilt finally got the hot start they needed and rolled over an outmatched UAB team for a 52-24 win on Saturday. What does that mean for their return to SEC play next week against Missouri?

Share All sharing options for: The Commodore Review: How Vanderbilt Really Looked in Their 52-24 Win Over UAB

That was the performance that Vanderbilt fans had been expecting from this offense.

After four weeks of inconsistent play and an offense that had few realistic threats outside of Jordan Matthews, the Commodores finally found their rhythm in a 52-24 home win over Conference USA foe Alabama-Birmingham. The three players this Vandy offense needed to step up - Jonathan Krause, Jerron Seymour, and Austyn Carta-Samuels - proved that they can all play on the same page to lead James Franklin's team to the emphatic win they'd been waiting for since week one.

Though it came against a non-conference opponent, the 28-point victory will still serve as an inspiration as the Commodores dive headfirst into the toughest stretch of games on their schedule. Their newfound playmaking depth on offense was the biggest revelation that came against the Blazers. Four different players totaled up more than 100 yards of offense in the win. Seymour led the pack with 152 yards both on the ground and through the air. Krause proved once again that he's able to be this team's #2 receiver by notching the first 100-yard receiving day of his career. And Matthews, as expected, continued his steady march towards breaking Vanderbilt and SEC career receiving records.

The biggest story may have been Austyn Carta-Samuels's, though. The fifth-year senior became the first quarterback since Jay Cutler to have a pair of 300-yard passing games in the same season, and each have come against FBS opponents. He was efficient and precise against the Blazers on Saturday, finding holes and executing John Donovan's gameplan to rack up 334 yards in just over three quarters of play.

It may not have come against a high profile opponent, but it was an encouraging result at a position where Vanderbilt has struggled to find consistency in the past. The Commodores don't need Carta-Samuels to pass for 300 yards every game, but they do need him to be able to find alternate targets when Jordan Matthews is earning triple-coverage at wideout. On Saturday, ACS found Matthews for eight of his 23 completions. The team's other wideouts caught six passes, their tailbacks caught four, and Vandy's tight ends/fullbacks added five more receptions.

That's the kind of balance that can help this team develop an offensive rhythm, and it was the driving force behind Vanderbilt's 52-point explosion on Saturday. Now, the Commodores have to prove that they can glean a similar performance from Carta-Samuels and his targets against an SEC foe. This week's home game against 4-0 Missouri should be a good gauge of that.

Vandy did what they needed to do on Saturday by getting a big win over an outmatched opponent. It was a task they'd failed to finish a week earlier against UMass. Now comes the hard part - a big test against Mizzou that could end up defining bowl eligibility for either team. 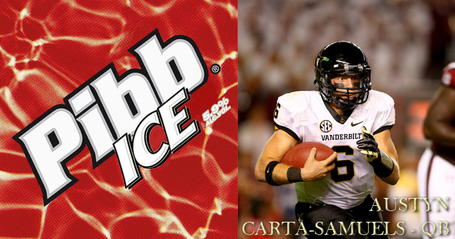 The PiBB Ice Player of the Week: Austyn Carta-Samuels.

Carta-Samuels did what Vanderbilt needed him to do on Saturday, coming up with a big passing performance that proved that the Vanderbilt offense was alive and well. In fairness, Jerron Seymour did pretty much the same thing at running back as well, so consider him player 1b in this week's rankings.  ACS completed 23 of his 29 passes and calmly led the Commodores downfield being a series of short passes and some well placed deep balls. It was an encouraging effort from a senior leader who still has plenty of time to leave his mark on this football program.