Schadenfreude Fridays: The Spruce Goose - An Engineering Marvel of Failure

Share All sharing options for: Schadenfreude Fridays: The Spruce Goose - An Engineering Marvel of Failure

In 1942, the United States had a problem. Several problems, in fact.

This one, like many of the others, was related to World War II. The nation needed to find a way to ship supplies and troops overseas to Allied Britain. Unfortunately, German U-Boats had made ocean travel a grim proposition. Shipping channels were wrought with Nazi submarines that rained hell on Allied vessels, and the U.S. Navy had yet to develop the cruisers to protect and escort maritime traders across the Atlantic. As a result, over 800,000 tons of American support had been lost at sea in just over a year of combat.

That left air travel as the last pillar of support, but few planes had the payload size to make the trip worthwhile. New planes could be built, but wartime rationing had stalled aeronautical development thanks to limited supplies of metal. This new aircraft would not only have to be enormous in size, but also entirely made of alternative materials. This was a daunting task for developers in the budding private field of aeronautical engineering.

That's when Howard Hughes - Hollywood producer, aviation pioneer, and budding crazy person - threw his hat into the ring. His vision? To level forests of Sitka birch trees in order to create the flying warehouse that could restore the Allied supplies overseas. His plane would be able to fly across continents and land in ports across Europe. It stood five stories high, had a 300-foot wingspan, could transport 750 troops at a time and even hold a Sherman Tank.

After more than five years of development, it flew exactly once, for approximately one mile. Behold, the Hughes H-4 Hercules: 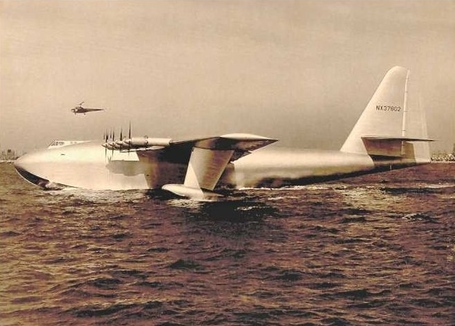 The idea of a flying lumberyard wasn't solely Hughes's, but I'll be damned if he didn't run with it. The production started as a joint venture between Hughes and Henry Kaiser, who was a leading developer of wartime cargo vessels that became known as Liberty Ships. Kaiser was the catalyst behind the idea, but since he knew little about designing aircrafts, he turned to Hughes and his designer Glenn Odekirk to bring his vision to life. His plan made sense in context; by teaming with one of the country's most respected aviation teams, the group could churn out a game-changing aircraft in just 10 months. That would be fast enough to potentially swing World War II in the Allies' favor.

Sixteen months later, Kaiser abandoned the project amidst piles of failed prototypes and little legitimate progress. The combination of untested technology and Hughes's dedication to perfection leveled the project in its tracks. This was a problem that the United States government had invested heavily in. Congress had appropriated $18 million for three aircraft that could be deployed in the midst of World War II. Using Kaiser's timeline, they expected these airships by late 1943. When 1944 rolled around, the only man in the design process who had any experience shipping wartime goods had left the project. In simple terms, the project looked like it was dead in the water.

Detractors failed to take into account Hughes's budding obsessive-compulsion behavior, however. The billionaire pressed forward with the vessel several years after Kaiser conjured it up in a fever dream. World War II ended in 1945 with no sign of the plane people had termed the "Spruce Goose." Allied forces were able to defeat their Axis enemies without Hughes's flying treehouse, instead turning to technology that actually worked to gain an edge over the conquering armies of the east. Somehow, Hughes's useless plane had been rendered even less necessary once peace was declared.

Still, the aviator kept his nose to the grindstone. Hughes poured between five and seven million dollars of his own money to keep the project afloat despite no real plans to ever get the craft airborne. By 1947, the vessel was still in development. This flew in the face of any sort of logic other than Hughes's; planes could now be built with actual metal, and the need to fly Sherman Tanks across the ocean had significantly diminished. This drew the ire of politicians across the country, who demanded to see some kind of return on their mult-million dollar investment. The Senate created a special sub-committee solely to investigate Hughes Aircraft.

Hughes was brought before Congress to testify to the work that he had been doing on the H-4 Hercules, as well as with other government contracts. He was anything but apologetic for the project that had effectively wasted $18 million in taxpayer money on. Since walking into the hearing with two middle fingers directed towards the senators while wearing a tie depicting the gallery having sex with themselves would have been bad form, Hughes took a softer approach instead:

The Hercules was a monumental undertaking. It is the largest aircraft ever built. It is over five stories tall with a wingspan longer than a football field. That's more than a city block. Now, I put the sweat of my life into this thing. I have my reputation all rolled up in it and I have stated several times that if it's a failure I'll probably leave this country and never come back. And I mean it.

After that monumental display of balls, Hughes returned home to California to back up his big words. He had his crew dump the Hercules into the Port of Long Beach and invited throngs of spectators and members of the press to watch his masterpiece in action. After two taxiing trips down the harbor, Hughes decided that the time had come for the Spruce Goose's maiden voyage. With all eight high-capacity engines operating, it rose to about 70 feet in the air where it stayed for approximately one minute at 135 miles per hour.

The H-4 Hercules could fly, and that was enough to remove much of the Congressional heat from Hughes's back. While the subcommittee's report on Hughes essentially condemned his practices, it could not find him at fault for misappropriating funds once it turned out that the damn thing actually flew. Hughes and his company turned over other contracted aircrafts that were actually useful to the U.S. Military, but kept the H-4. The plane was returned back to its hangar, and promptly disappeared from the public eye.

Hughes wasn't going to let go of his pet project so easily. Even after the plane had been effectively decommissioned, he kept it ready for flight in a massive hangar built specifically for the H-4. This maintenance and upkeep cost the billionaire approximately one mission dollars each year between 1947 and 1976, employing between 50 and 300 workers annually to maintain the aircraft. Of course, at that point Hughes was more concerned with finding places to keep his jars of urine, buying every restaurant chain ever founded in Texas, and perfecting his codeine addiction. Needless to say, he was probably too busy for many recreational flights in his mobile storeroom.

Today, the plane sits in the Evergreen Aviation Museum in Oregon, where it takes up close to a city block's worth of storage space. It remains an engineering marvel, albeit a mostly useless one. The project cost Americans $18 million. It's estimated that Hughes funded another five to seven million to get the plane in the air. That would account for over $257 million in 2012 dollars, all for one expensive punchline to Hughes's burgeoning madness.

Hughes's descent from icon into recluse began with the H-4 Hercules, and his minute-long float 70 feet above the Long Beach water may have been one of the final moments of triumph in a lifetime full of them. The project showed that the billionaire still had the capacity to be brilliant, but lacked the direction to apply it. The Spruce Goose will go down as one of aviation's most notorious projects, thanks to its status as one of World War II's greatest white elephants. But Hughes never addressed it as a failure - not after proving that you can make plywood airborne.