Let's be honest; the golden days of innovation in fast food have passed us by. The days when fish filets and junior bacon cheeseburgers were fresh menu items are long gone. In their place are tired retreads and outlandish stunts like Doritos taco shells and sandwiches where chicken is used as bread. These are the vestiges of generation Z's failures as Americans, a group that will forever be tied to the success of LMFAO as a musical artist.

Meanwhile, the fast food 1% continue to look down at us from the top of their golden, perfectly molded fried egg. They have determined that ours is a generation that will no longer settle for three all-beef patties on a whole grain bun. However, if the double quarter pounder with cheese was John Lennon, then the Double Down is Kid Rock. History will only shine kindly on one of them.

The fast food business is a static industry. At this point, Americans understand the major and minor players and what they can expect when they are going out to eat. The combination of meat plus bread along with various fried starches, served in 90 seconds or less, has been a formula that has driven a trillion dollar industry and made America the great country that it is today.

This is a simple concept that is often overlooked when fast food companies try to shake things up.

Fast food in its essence is a simple transaction. It's a low-quality option for a low-cost that leaves both parties satisfied, save for the poor 16-year-old kid who is stuck working a double while his skin slowly converts fryer oil into whiteheads. McDonald's perfected this art, and other chains like Burger King, Wendy's, Taco Bell, and more have used that strategy to feed millions of lazy, drunk, poor, or self-hating customers every day. Of course, that doesn't mean that even the biggest titans of the fast food industry don't mess it up from time to time.

Burger joints and fast food places are built on consistency and efficiency. Customers walk into a McDonald's fully expecting the low grade circus that comes with their Big Mac. When that atmosphere is changed - whether it's in the food, the way it is served, or the place people are eating it - it stands to create some negative backlash. Even if you're handing someone a steak when they're asking for a burger, there's still bound to be some confusion.

That confusion can escalate into angry panic when that replacement steak turns into a shrimp basket or a specialty burger designed to drive kids away. Some of America's greatest companies have suffered through horrible failures in their quest to give the public the best damn meal they can get for $5. Today, we'll look at a few of these mistakes as we wind down the weeks before college football gets underway. Read on for your healthy dose of non-UT related schadenfreude. 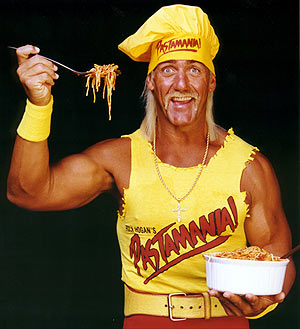 The nation's collective shuddering at this image spontaneously gave birth to Guy Fieri. via www.nationmaster.com

Hulk Hogan's Pastamania!: Hulk Hogan has done a lot of things right, including single-handedly winning the Cold and Iraq Wars through atomic leg drops, prayers, and vitamins. Unfortunately for the Hulkster, his failures have made him an equally tragic failure in the twilight of his career. Sometime after having his family threatened by the Ultimate Warrior but before turning down the first right of celebrity endorsement to what became the George Foreman grill, the Hulkster made his own foray into the fast food market with Hulk Hogan's Pastamania!.

Hogan allegedly came up with and bankrolled his own fast food pasta restaurant, allowing him to paste his face all over the location and throughout its menus. Pastamania! offered sophisticated eaters specialties like Hulk-Us, Hulkaroos, and other things I'm sure existed like Hulkghetti and Hulkballs, laHulkgna, and Hulk Hogan's special Fuck You and Eat It!. The shop had only one location, and that was in the Mall of America. Despite offering a carb-heavy meal to midwestern mallgoers, the restaurant lasted less than a year.

America, as it turns out, just wasn't ready for a fast food pasta restaurant that served Chef Boyardee entrees for six times the price, regardless of how many pictures of the Hulkster hung on the walls. Local Minnesotans realized that they could get better quality pasta and fewer latently homosexual overtones just by getting spaghetti at their local gay bars. Plus, they wouldn't have to step foot in the Mall of America. In terms of opening the Land of Lakes to the wonderful culture of Minneapolis's burgeoning LGBT scene, this was a total success. In terms of opening a successful chain of restaurants, it was a Tijuana dumpster fire.

That didn't stop Hogan, though. He would later go on in life to endorse such products as the Hulk Hogan Thunder Mixer and the Hulk Hogan Ultimate Grill. It is estimated that these products netted Hogan upwards of $30. 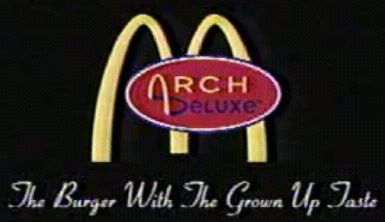 Oh hell yes, it is date night tonight. via paxholley.files.wordpress.com

The "Adult" Revolution in the Burger Wars: At some point in the mid-90s, McDonald's and Burger King - America's two top fast food restaurants - decided that the time had come for them to force maturity upon their customers. The gentlemen and ladies of Generation X and their baby booming parents were no longer the blue collar slobs that wanted the meat and bread of the 80s, but a sophisticated audience looking for a true suppertime experience. Keep in mind that these restaurants were still buildings where you could order and receive food without even putting your car in park.

While these fast food chains had grown on kid's meals, senior citizens, and parents looking to store their kids in a poorly monitored ball pit for a modicum of private time, they were missing out on a major population that had plenty of disposable income - single adults. McDonald's and Burger King weren't food destinations - they were last resorts when real restaurants were filled up, a go-to fix for late night meals, and the final refuge of the haggard father. With two major changes, the country's biggest burger chains tried to fix all that.

The Arch Deluxe was McDonald's foray into that fresh slice of adult revenue in 1996. It was an upscale-sounding offering that essentially combined a bacon cheeseburger with a mustard-and-mayonnaise secret sauce. Like everything else at the restaurant, it came pre-flattened in its own cardboard box. It also cost significantly more than a Big Mac.

McDonald's dropped $100 million in advertising to convince a nation that kids would be absolutely disgusted by their new burger, hoping to appeal to a more sophisticated adult palette. Their campaign was dedicated to children recoiling in horror from the new burger, as though the only reason that they settled with the name "Arch Deluxe" was because "Child Rape Special" had already been trademarked by the Sandusky family. The company projected over $1 billion in sales in year one of the Deluxe Era. It didn't even come close to meeting that figure. The Arch Deluxe was eventually pulled from the menu and sealed in the company's Vault of Shame next to McPizza and the McDLT. 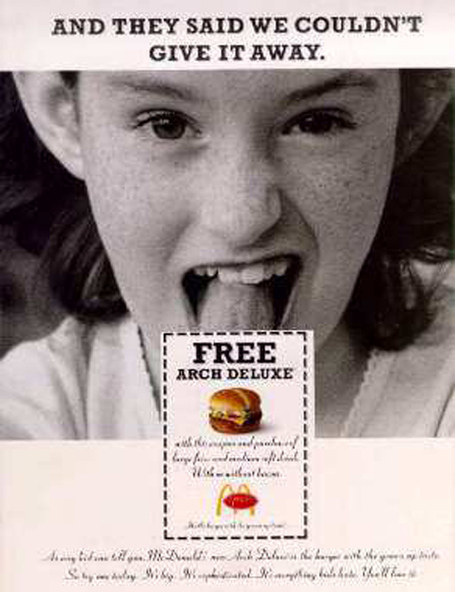 No, what we said was that you couldn't sell it. I don't think we ever suggested that you wouldn't take a loss on this one. via cdn.buzznet.com

Burger King's venture was equally clumsy and poorly executed, but came in 1992, four years before McDonald's mistake. Rather than just lure adults in with a menu change, the home of the Whopper underwent a philosophical transformation. BK was no longer a fast food place, but a sit-down restaurant where beleaguered employees now doubled as wait staff. Their burgers now came with meals that included cole slaw, baked potatoes, rolls, and napkin rings.

``Customers are saying to us, we want atmosphere, we want service, we have more time, we want to take our family and we want to relax,`` according to a Burger King spokeswoman in 1992.

Well, first off, no one has ever said that about Burger King, ever. Secondly, BK's fine dining mashup gave customers the unique experience of a sit-down restaurant in a place that mostly smelled like urine. You could bring a tray of complimentary popcorn back to your plastic booth and contemplate what loneliness really meant while waiting for an underpaid teenager to bring you your Whopper. It truly was the best of both worlds.

Six months of market research went into BK's new plan, and it fizzled out almost as quickly. People going to Burger King weren't interested in shrimp dinners or meals that required utensils. They were there for a simple formula that communed meat to cheese and then applied the whole package to bread. Despite corporate's best intentions, Burger King's atmosphere remained that of a place where you buy terrible weed in the bathroom, only this time you could get free snacks on your way in.

The lesson learned here was clear. Grown-up tastes include things like scotch, chewing tobacco, and horseradish. Rather than combine those three with a full pound of steak to create the world's greatest fast food, McD's and BK went in the exact opposite direction. They threw pants and a button-down on their same old products and tried to make them seem like a presentable wedding date. Unfortunately, fast food burgers can't change their stripes. They're still going to be the ones staring down the bride's cleavage and taking swings at the open bar at the end of the night no matter how classy the affair. For some of us, that's a lesson that only costs us a few friends. For Burger King and McDonald's, it cost millions.

Burger King's Inability to Pick a Direction and Stick With It

Give us a hint, Burger King. Are you the place that wants us to pound down an 810 calorie, 110% cholestorol breakfast sandwich so badly that you invented the word Meat'Normous to entice us? Or are you the delicate little flower that wants to make healthy smoothies with a shirtless David Beckham? Is your target audience supposed to be the guys who just stepped off an Alaskan crab fishing boat, or the newly single parent who is just trying to get back into shape for the singles circuit?

In five years the company has gone from the fast food place that wants to give you the power to stack meat, cheese, and bacon until your underdeveloped arms can no longer hold their burgers (the BK Stacker) to the restaurant with a cavalcade of salads so fresh that they make Salma Hayek orgasm just thinking about them. In one focused marketing swoop, Burger King decided to leave the big burger business to places like Hardee's and decided to expand into healthier alternatives. The move follows the same turn that McDonald's and Wendy's undertook years ago. Now BK isn't just behind the curve, they're also pissing off some of their most hardcore fans.

It's a disappointing turn from the luminaries that brought us cornerstone items like the Angry Whopper, Rodeo Cheeseburgers, a dozen different names for the same awful chicken sandwich, and a new style of french fry every five years for some reason. The "Have It Your Way" people have been rendered unable to figure out what exactly their way even is any more. Instead, the King will press forward with their business lagging behind their competitors, having few unique menu options or styles to fall back on, and utilizing the promotional power of Jay Leno.

If this move fails, it'll likely point to a new phase in the evolution of Burger King, which will further serve to confuse a generation who wants nothing more than french toast sticks in the morning and heaping piles of meat at night as they turn two middle fingers to dietary restraint. No one knows for sure what the future of BK will bring. If I had to guess, I'd wager that the whole menu will be converted to Hulk-Us.