In years past, Schadenfreude Fridays were a way to comfort the faithful. As Vanderbilt scrambled to replace Bobby Johnson and turned to a former turkey inseminator to handle his post, these articles reminded us that things somehow, someway, could always be worse. It's how we turned a series of articles with a vague, tangentially-related connection to sports into our most-liked pieces on Facebook.

Now, the Vanderbilt football team is entering an era of prosperity unlike any Nashville has ever seen before. James Franklin is bringing recruits that would have never even opened their letters from Vanderbilt in years past to Dudley Field to don the black and old gold. He's made friends with high-level players and enemies with high-level coaches in his quest to build a winning tradition at Vanderbilt. All signs suggest that it's working, too.

So with interest and happiness surrounding this team at an all-time high, that means that we should abandon the schadenfreude, right?

Absolutely not. In our commitment to finding miserable wrecks to write about and content to plug in during the dog days of college sports, we're pleased to announce that Schadenfreude Fridays will continue the AoG tradition of laughing at the misfortune of others. It won't be every week, but we're committed to finding the failures that will put next year's basketball rebuilding process in a more favorable light.

Today, we go back to a familiar well; the king can. Our first installment was met with some favorable reviews, but also with the recurring theme of "let's not do this again" from myself and fellow taster Gumbercules. However, with spring looming and no major sports on tap besides baseball, we were forced back the place where $7 can make any man feel like a king; the malt liquor aisle of our local Woodman's.

Needing a theme, we grabbed the first four watermelon flavored 24-ounce cans we could find, partially due to a lack of creativity and mostly because we don't like ourselves. What followed is recorded in our running diary below. A disclaimer to those who want to emulate our experiment; my partner Gumbercules suffered through a rare three-day hangover after these tests, including a span where his legs refused to work properly. Recreate at your own risk. 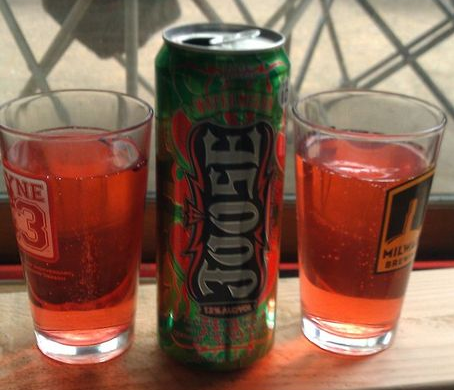 Joose Watermelon (Joose): $1.99,12% ABV
CD: Wow. That is absolutely the color of something I want coursing through my stomach.
G: It looks like the water they were pumping out of Fukushima.
CD: That explains the healthy glow.
G: Drinking this is going to turn me into a X-Man, only my special power will be the inability to feel shame and sweating through my liver.
CD: Guh. That taste just stays with you, too. I feel like if I cry in the next two weeks those teardrops are going to be laden with watermelon malt.
G: Better not watch Rudy anytime soon.
CD: Or Dragonheart.
G: Or that one episode of Futurama.
CD: ... stop.
G: If it taaaaaakes forevveeeer.
CD: Stop.
G: I willlll waaaaaaait for yooooou.
CD: OH GOD STOP
G: ...
CD: (sniffling) Yeah, the tears burn a little. Fry's dog...I...just...

(minutes pass)
G: It just smells like a headache.
CD: Also, wet dog.
G: God, I've had one sip and I already have heartburn.
CD: Your body knows. It's upset that we're doing this again.
G: My kidneys are just going to blank this whole drink. It's going to come out exactly like it went in.
CD: Your stomach will disavow any knowledge of ever seeing this Joose before.
G: The scene in the bathroom is going to be exactly like the Ken McElroy murder. Everyone knows what happened, but no one will admit it for the good of the community.
CD: Joose, the drink that brings people together to cover up any knowledge that they were ever drinking Joose.
G: Weird, it actually says that on the can. 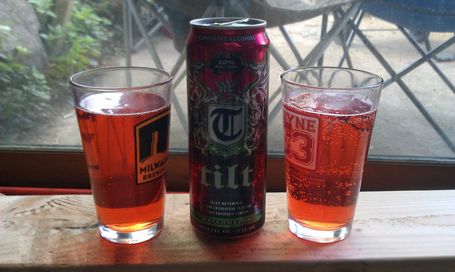 Tilt Watermelon (Anheuser-Busch): $1.99, 12% ABV
CD: At least this one pours with a head.
G: That's not necessarily a good thing.
CD: It probably shouldn't be gray. This looks like the bilge water from a gay yacht.
G: Yeah, it looks like the color scheme for a bad roller hockey team.
CD: Now taking the tile in the East Nashville Sportsplex, the Knox County Cirrhosis!
G: Their goalie is like 65 but he's so fat that he's basically a brick wall out there.
CD: When they won the city title last year they dumped a cooler full of Tilt on their coach and he turned into that dwarf from Labyrinth.
G: This has a nice pleasant Jolly Rancher smell to it. (Sips). It's also much creamier than the Joose.
CD: Because nothing goes with watermelon like a nice, thick, creamy texture.
G: Gah, it's so syrupy. It's like they forgot to add the right amount of water.
CD: Yeah, well, it came highly recommended by a homeless looking man who happened to be in the aisle with us.
G: Was he a connoisseur?
CD: Tough to tell, but he definitely had his picture up on the wall of the liquor store, behind the counter under a sign that said "DO NOT SELL TO."
G: So yes.
CD: Yeah, that's like a Michelin five-star rating when it comes to malt liquor.
G: When Busch gets their market research back on who buys these, do they just curl up and cry solemnly for a bit, or are they too far past the point of caring?
CD: They're marketing a watermelon malt beverage whose main appeal is to homeless frat boys and people who are trying to murder their brain cells as efficiently as possible in order to receive federal assistance. I think they're *delighted* with the results of their focus groups.
G: This can needs more skulls if it's going to match my Ed Hardy t-shirt.
CD: Flavor-wise, it's better than the Joose. It tastes like a cough syrup Ring Pop.
G: I'll let my bronchitis-infected 12-year-old cousin that the Budweiser folks finally got her letters then. 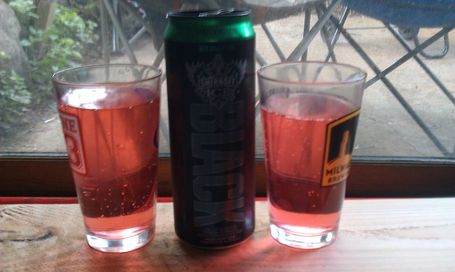 Smirnoff Ice Black (Smirnoff): $1.99, 8% ABV
CD: Only eight percent?
G: You can tell since it tastes the least like urine of anything we've had so far.
CD: Yeah, this actually tastes like a beverage made for humans.
G: Let's not go overboard.
CD: It's the most Jolly Rancher-y drink that we've tasted today.
G: But there's a sinister undercurrent to it. Like it came from the candy dish at a brothel.
CD: This Jolly Rancher has been places before it got to your mouth.
G: The secret ingredients are body heat and shame.
CD: It's like drinking a Cinemax movie.
G: It's the Cleavagefield of beverages.
CD: Fifteen-year-old boys with absentee parents and Dish Network will really appreciate that reference.
G: Anyway, this actually isn't too bad.
CD: It's light and crisp, but that might be an illusion after drinking the Tilt.
G: No, it's definitely more drinkable. It's not like Smirnoff doesn't have a wealth of experience turning poison into something that teenage girls will swoon over, though.
CD: Also, young adult males, or have we already forgotten the Icing craze of 2010?
G: Ah yes, the "prank" where you hand your friend a free drink for no reason.
CD: Yeah, it really wasn't much of a problem unless you didn't like Smirnoff Ice.
G: I don't know anybody who doesn't like Smirnoff Ice.
CD: That sounds like something someone would say to Chris Hansen on "To Catch a Predator."
G: Moving on.
Rating: Forgettably tasty. 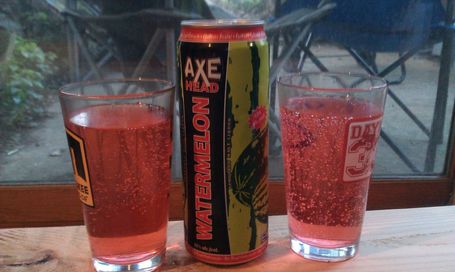 Axe Head Watermelon (Minha's): $1.49, 12% ABV
CD: Have you heard of Minha's? They're the great story of a pair of siblings whose goal it was to buy their own brewery and make everything that comes out of it taste like paint.
G: Well, then this is a success.
CD: The best part is that they get a ton of free advertising from that television show Intervention every time they focus on an addict in Canada.
G: I can see a methhead at a Roughriders game creating a pipe out of this can.
CD: I can see a methhead at a Blue Bombers game cutting a hole in the side of this can and making terrible love to it.
G: Was my Saskatchawan reference not enough for you there?
CD: I only pull for winners with my meth and malt liquor jokes.
G: Everyone is a winner in the CFL. 75 percent of the teams in that league make the playoffs. The Grey Cup is basically just a participation award.
CD: Not for the Roughriders. I take it as a badge of honor that no Vandy alums play in the CFL. It's a matter of pride.
G: Yeah, I'm sure *that's* the reason why Chris Nickson didn't catch on up there.
CD: Anyway, this drink. The overwhelming taste of corn syrup means you can barely taste the garbage water it was made from.
G: It's like 24 ounces of bad cough syrup, without the added benefit of any health improvements whatsoever.
CD: This is like drinking Bell's Palsy out of a can.

G: What did Hulk Hogan used to say? "Say your prayers and take your vitamins?" Drinking this is like the exact opposite of that.
CD: The Hulkster would be so disappointed. I do appreciate the sentiment that drinking this is not only an affront to our bodies, but to God himself.
G: "LET ME TELL YOU SOMETHING, BROTHER! YOU COULD HAVE FOUND A BETTER WAY TO SPEND YOUR $1.49, DUDE!"
CD: Every sip you take kills a poor little Hulkamaniac, somewhere. Starting with the one inside of you.
G: "WHATCHU GONNA DO, BROTHER, WHEN YOU START PUKING BLOOD AFTER YOUR THIRD CAN OF AXE HEAD???"
CD: Watermelon-flavored blood.
G: It was a joke. No human could get through three cans of this.
CD: The Hulkster could.
G: I said human.
Rating: Real American, inasmuch a Canadian high gravity watermelon drink can be.

Well, there you have it. The Smirnoff was drinkable, the Tilt was alcoholic watermelon syrup, and the Axe Head and Joose were both mostly gasoline. I hope this helps all of our homeless readers out there better understand their options when it comes to the king can. Any questions, insults, or suggestions for the next round of king cans? Be sure to leave them in the comments below. 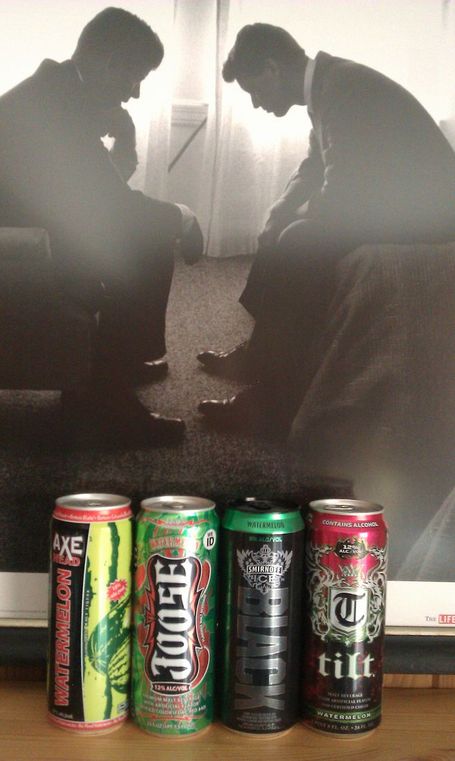