Deuce Brand just recently named Earl Bennett their Athlete of the Month and unveiled their new Agent Orange signature watch. We were able to rattle off a few questions to the SEC's all-time reception leader - here's what he had to say.

Jordan Matthews has put together one hell of a 2012 season so far, but he's still nearly 100 receptions behind the man they call Agent Orange when it comes to the Vanderbilt - and SEC - all-time receiving record. Earl Bennett carved out a prolific career in just three years at Vandy, catching at least 75 yards in each season and teaming up with Jay Cutler to beat Tennessee in Neyland Stadium as a freshman. Now, he's been reunited with Cutler in Chicago, where he's become an invaluable presence out of the slot for an 8-3 Bears team.

His accomplishments haven't gone unnoticed outside of the midwest, either. This November, Bennett was named Deuce's Athlete of the Month, a honor that includes the creation of a signature Agent Orange watch. Fortunately for us, the kind folks over at Deuce were able to get a hold of Earl so we could ask him a few questions about his professional career.

1. Has playing with a handful of former teammates and Vanderbilt alumni with the Bears (or Vanderbilt-North) helped your adjustment to the professional game?

Earl Bennett: It definitely helps having familiar faces in a new town and going through the transition from college to the NFL with people you know. Plus, it doesn't hurt having the QB who threw me the ball during a record setting career at Vandy be my QB in chicago.
2. The Bears locked you in to a four-year contract extension before you could hit free agency. Is there any part of you that feels like you missed out on the free agent experience?

EB: I could have gone to free agency but it was important for me to stay in Chicago. Remember, I lacerated my liver against new orleans early on in the season so my production was down. I think I had about 18 catches. My agents did a great job of analyzing my value & explaining all scenarios. At the end of the day I wanted to stay on Chicago and to get the deal I did on limited production showed me a lot about how the organization valued me. I appreciate them for that and am glad I stayed.
3. What's your favorite road stadium to play in as a pro? What's your least favorite (if you can answer that)?

EB: The stadium in Nashville where the Titans play (because of my friends & family around vandy). Don't have a least favorite; how many people get to play in any NFL stadium? Not many. It's a blessing and I cherish each experience.
4. Vanderbilt's had a pretty solid turnover amongst the coaching staff since you left in 2007. Do you have a connection with James Franklin and his crew these days?

EB: Love what James Franklin is doing. Recruiting great players to Vandy and fielding competitive teams. He's a good coach.
5. Who on the 2012 Vanderbilt team do you think has the brightest career in front of him in the NFL?

EB: Jordan Matthews. Have to go with a WR right? He's going to get a shot for sure.
6. Do you have any regrets about leaving Vanderbilt after your junior season when the team ended up playing in their first bowl game in 25 years and hosting College Gameday the following fall?

EB: None at all. It would have been nice to play in a bowl game but I felt I accomplished everything I could on the collegiate level. It was time for me to go.
7. Finally, Vandy has had a major turnaround in recruiting over the past two years, thanks mostly to Franklin's arrival and a handful of facilities upgrades on Natchez Trace. As a player, how much does having state-of-the-art locker rooms and practice grounds mean when it comes to choosing where you want to play?

EB: Crucial. Look at what Oregon has. Look at Alabama, Florida, Texas, LSU have. They all have state of the art facilities that, on their own, win recruiting battles. If you want to be competitive in college football you have to have top of the line facilities.

Many thanks to Earl Bennett for taking the time to field our questions. That won't be all that we'll have in store with Mr. Bennett and his signature watch, so stick around AoG in the next few days to find out how you can win an Agent Orange watch of your own. 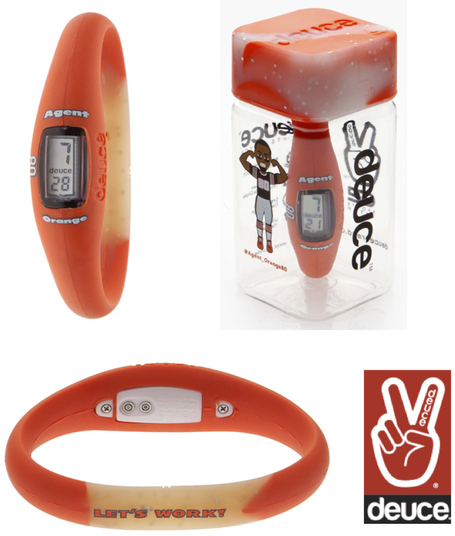