The Commodore Review: How Vanderbilt Really Looked in Their 41-18 Beating of Tennessee

Vanderbilt's 41-18 win over Tennessee was the team's first at home since 1982. The 'Dores relied on a huge third quarter to effectively get Derek Dooley fired and claim their throne as the best college football team in Tennessee.

Share All sharing options for: The Commodore Review: How Vanderbilt Really Looked in Their 41-18 Beating of Tennessee

Well, we got Derek Dooley fired.

Of course, like Joker Phillips before him, Dooley's fate wasn't created by the Commodores - it was merely sealed by them. Vanderbilt ran away to a 41-18 victory at Dudley Field on Saturday night, holding one of the conference's most explosive offenses to just one touchdown drive. Dooley had made it clear that the only thing he could do anymore was to "kick the shit out of Vandy" in the past two seasons. When he proved that he couldn't even handle that task, the Volunteers decided that they couldn't even allow him the comfort of coaching Tennessee's last game of the season.

So, in one fell swoop, Vanderbilt:

That's one hell of a busy night, but that's not all. Players like Jordan Matthews, Zac Stacy, and Jordan Rodgers all worked their way up the Commodore record books with standout games that showed just how far this team has come in three months. Rodgers passed Chris Nickson for 10th all-time with 2,190 yards through the air. If he keeps up his pace, he'll end up third on the team's single-season passing yardage list. Stacy, despite being limited by various injuries throughout the season, now owns the seventh-best rushing year in school history, and he's got a good chance to be the only Commodore to record two 1,000-yard seasons at tailback. Matthews, who broke out for 115 yards on Saturday, is just 95 yards from breaking Boo Mitchell's single-season receiving record.

Forget the notion that this is the "same old Vandy." This team is already light years ahead of where they were in 2011. The level of improvement that this team has undergone has been impressive. The 'Dores went from being a team that gassed out under the weight of stalled offensive drives in the fourth quarter to become an unlikely juggernaut in the second half. The Tennessee win marked the second straight game where Vanderbilt's halftime adjustments proved to be the difference between victory and defeat. In their last six wins, Franklin's team has outscored their opponents 107-37 in the third and fourth quarters.

That advantage has been the product of an offense that has finally found its rhythm and a defense that has matured quickly after losing four impact players from 2011. The team's linebackers have continued to impress, as veterans like Archibald Barnes and Chase Garnham have teamed up with less experienced players at the position to create a cohesive and athletic unit. In front of them, a deep defensive line helped stop UT behind their own line of scrimmage seven times. In the backfield, an experienced secondary limited Tyler Bray and Justin Worley to just 154 yards while completing fewer than 50 percent of their passes.

Most importantly, these kids are playing with confidence. Vanderbilt had several opportunities to crumble against a talented Volunteer team. Instead, they got huge performances across the roster when they needed them the most, putting together a 21-point third quarter that essentially ended the game 15 minutes before the clock ran out. This time, it was the Volunteers who looked shell shocked, making careless mistakes, botching gadget plays, and looking utterly defeated when the fourth quarter rolled around. If you stripped each team of its colors and logos, you probably could have convinced most Commodore fans that game footage from Saturday was a Tennessee win from the mid-90s.

The tables have turned in Tennessee. Vanderbilt now has the best college football team in the Volunteer State (with due respect to Middle Tennessee State). How long that will last is anyone's guess, but with James Franklin in tow, that's a mantle that the 'Dores can hang on to for years to come. Who Tennessee hires next will be one of the biggest questions that the SEC will face this offseason. Whoever they pick, you can be pretty sure that he'll think twice before announcing that he'll kick the shit out of Vanderbilt. 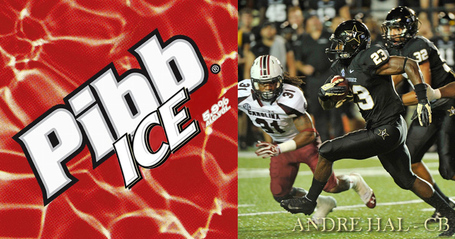 The PiBB Ice Player of the Week: Andre Hal

Vanderbilt had been surprisingly low on interceptions in 2012 despite fielding an upper-tier secondary. Hal helped change that on Saturday, producing two of the team's three picks against the Volunteers. He returned each interception for over 30 yards to set up Commodore touchdowns on the ensuing drives. His play swung open a game that had favored Tennessee early.