The Commodore Review: How Vanderbilt Really Looked in Their 27-26 Win at Ole Miss

Vandy overcame a slow start to become bowl eligible for the second straight season - a school record. Jordan Rodgers had a performance that will define his career as a Commodore. Can the team build off that?

Share All sharing options for: The Commodore Review: How Vanderbilt Really Looked in Their 27-26 Win at Ole Miss

Vanderbilt had settled into a rut towards the end of the first half. Their play calling was predictable, their drives were stalling, and the defense was allowing Ole Miss to drive into Commodore territory with regularity. Four of the team's seven offensive series in the half ended with three plays or less. Conversely, the Rebels had as many drives end with points for the opposite sideline.

Worse yet, the team was going to have to overcome a double-digit Mississippi lead without their star tailback Zac Stacy, who left the game after only two carries with a knee injury. Only Carey Spear's 44-yard rainbow-arcing field goal kept the team from trudging into the locker room with their heads hung low.

Then, James Franklin must have given one hell of a halftime speech.

Vanderbilt trailed 23-6 early in the third quarter, but played through the deficit as though the lifeless squad of the first half was the remnant of some 2006 team that Jordan Rodgers and Jordan Matthews had only ever seen on game film. Rodgers, who had just 54 passing yards in the first half, came alive behind a shift in playcalling that favored intermediate-level passes to set up big plays against a lackluster Rebel secondary. Wesley Tate and Brian Kimbrow, stepping up for Stacy, ground out every yard to make a Mississippi defense that had been dropping players into coverage sneak more defenders up to the line of scrimmage.

It only took four plays for that strategy to pay off. After Tate ripped off a 12-yard run on third-and-one, Ole Miss left Matthews single-covered as he ran a vertical route. Matthews got separation from his cornerback and Rodgers put the pass right where it needed to be. Suddenly, the 'Dores could find the end zone - and the game was back on.

That touchdown energized a Vandy team that needed something to rally around. That current simmered until late in the game, when the 'Dores held an Ole Miss team that had effortlessly driven 75 yards on only eight plays to a field goal after the Rebels faced first-and-goal from the six. Bo Wallace and Mississippi threatened to turn the game into a two-possession affair, but were turned back by a Vandy defense that bent all night but never broke. Instead, Vanderbilt got the ball back at their own 21-yard line, trailing 26-20 with 2:43 left on the clock.

There were plenty of opportunities for Vanderbilt to throw this game away with their final drive of the night. Rodgers could have been dropped for a costly sack that brought up an impossible fourth-and-19 situation. He could have been pushed a few inches back on a fourth-and-two run that barely delivered a drive-sustaining first down near midfield. Chris Boyd's touchdown catch could have been brought back by an off-the-ball holding penalty that negated a game-winning play.

None of those problems would have brought new and exciting feelings for Commodore fans. If anything, the expectation was on this team to find a way to lose. Not because Vanderbilt didn't have the better players - they did. Not because they didn't have the momentum and determination to win - they certainly did. Instead, a cloud of doubt hung over this team simply because of the mistakes of Commodore teams past. The ghosts of last season's five losses by a touchdown or less suggested that this team couldn't win like this.

Instead, Franklin and his team dusted away those ghosts and made their own history on Saturday night. If there ever were a game that made a case for the administration's "Brand New Vandy" mantra, it was this one. That shift, from a downtrodden collection of players midway through the second quarter to an energized and, most importantly, confident team in the second half was an affirmation of Franklin's "six seconds at a time" philosophy.

And it was good. It was good for this team, it was good for recruiting, and it was good for these fans. Every one of those groups deserved a break. Every part of this team needed that win. When Chris Boyd sauntered untouched into the end zone with :52 left, they got it. When the 'Dores forced a turnover on downs inside their own territory minutes later, Franklin's crew got a victory that will start to erase some of the heartbreaking losses from Vanderbilt's karma bank.

Now, the tough part will be finding a way to do it against Tennessee. 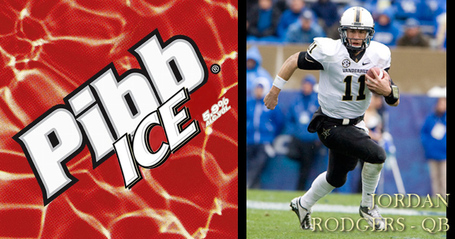 The PiBB Ice Player of the Week: Jordan Rodgers

It couldn't be anyone else (alright, maybe Jordan Matthews). Rodgers had his finest game as a Commodore and likely drove his team to the postseason while doing it. Fans had questioned his ability to come through in big games since 2011, but he finally proved that he can handle the pressure and engineer a game-winning drive. He finished with his biggest game of the season, passing for 267 yards and two touchdowns hile absorbing just two sacks on the evening.