The Commodore Review: How Vanderbilt Really Looked Against Missouri

Vanderbilt got their first SEC win of the season by beating Missouri in Columbia Saturday night. So what did we learn about the Commodores in the upset win?

Share All sharing options for: The Commodore Review: How Vanderbilt Really Looked Against Missouri

It certainly wasn't pretty, but it was effective. Vanderbilt used a controlling defensive performance and a flurry of big plays on offense to record the first conference road win of James Franklin's career with a 19-15 victory at Missouri Saturday night.

Jordan Rodgers and Zac Stacy overcame slow starts to put together solid performances, but the catalyst behind Vandy's win was a defensive effort that came together after Mizzou starting quarterback James Franklin was knocked out of the game. The 'Dores held backup Corbin Berkstresser to just nine completions in 30 attempts to shut the Tigers down long enough to pull off the comeback victory.

The Commodore defense showed what they can do late in games when they're buoyed by long drives by their offense. One of the team's biggest weaknesses this season had been their propensity to run out of gas in the fourth quarter. These players, after being pressed into constant action by an offense that often failed to chain together first downs, had allowed late leads against South Carolina and Northwestern to evaporate into losses.

The 'Dores had a chance to repeat that trend on Saturday, but flipped the script around thanks to strong play on both sides of the ball. Vandy moved the ball for drives of 75 and 78 yards to allow their defenders to get some much needed rest in the fourth quarter. The D responded by shutting down the Tigers when it mattered the most.

After Missouri drove to the Vanderbilt 24 yard line, the 'Dores came together to stop Kendial Lawrence for a one-yard loss and then forced Berkstresser into three straight incompletions. All four plays were the result of a huge effort across the defensive line. The 'Dores were able to penetrate into the Tiger backfield and put significant pressure on the quarterback to force a turnover on downs. It was the superlative performance that this team had been waiting for throughout September.

There are still questions that linger about the team's ability to stop high-level offenses. Vanderbilt held Missouri to one touchdown (on a busted coverage play) on Saturday, but they are also the same team that allowed Georgia to start their matchup off with four straight touchdowns in a 48-3 rout. Being able to stop Missouri's redshirt freshman backup quarterback is much different than being able to stop an efficient Jeff Driskel and Florida next weekend. While last week's win was a strong step in the right direction, this week's matchup with the Gators will be a true test of whether this team can sustain that level of play.

If Vanderbilt is going to pass that test, they'll need a big showing from their offense as well. The 'Dores proved that they could move the ball sporadically against the Tigers, but it will be tougher for Rodgers to buy time and find receivers against a faster and stronger Florida defense. Franklin and his staff will have a busy week preparing for a tough Gator squad, even after a momentum building win like Saturday's. They'll have to be even better than they were last week if they want to notch a huge home win over their fourth-ranked opponents. 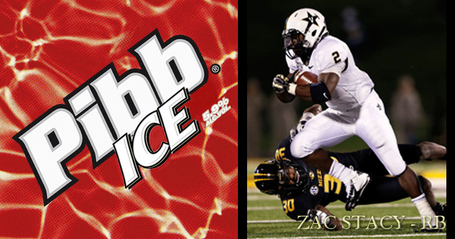 The PiBB Ice Player of the Week: Zac Stacy

Stacy's stats may seem underwhelming, but he was able to string together big runs when the team needed him the most. He was the only Commodore to find the end zone, and his man-strength powered 13-yard run in the fourth quarter shut down any chances of a Mizzou comeback. The senior was hindered by some occasionally suspect blocking and a Missouri gameplan centered around stopping the run, but he was still able to put together a MVP performance. Without him, Vandy's chances of winning Saturday's game would have dropped significantly.