The Commodore Review: How Vanderbilt Really Looked Against UMass

Vanderbilt eventually broke away from UMass in a 49-7 win...but not before giving Commodore fans something to worry about in the first half. Could a more conservative approach to fourth down help the 'Dores?

Share All sharing options for: The Commodore Review: How Vanderbilt Really Looked Against UMass

Even when Vanderbilt wins big in 2012, they win ugly. The Commodores struggled through much of a sloppy first half before breaking out to throttle an overmatched Massachusetts team in a 49-7 win Saturday night.

The 'Dores led 7-0 for much of the first half, buoyed more by Jonathan Krause's special teams play than their own offense. Vandy had two early drives march past the UMass 35-yard line but came away with no points as penalties and another botched fourth-down call kept the team from scoring on either. It wasn't until the Wild Dogs of the Vanderbilt defense stopped the Minutemen on fourth and four near the Commodore red zone that this team snapped out of their funk.

Jordan Rodgers responded by engineering an eight-play, 72-yard drive that swung the game's momentum directly towards the 'Dores. He was perfect on the drive, passing for 47 yards and connecting with Kris Kentera for the redshirt freshman's first receiving touchdown of his career. Wesley Tate, playing in place of an injured Zac Stacy, did a valuable job of stringing together solid runs to keep the UMass defense on their toes.

Things got out of hand from there, as turnovers and special teams keyed a scoring run that put Vanderbilt up 49-0 by the end of the third quarter. In fact, four of the 'Dores seven touchdowns were the result of defensive or special teams play. That's a big advantage for a Vandy team that needs every opportunity that it can get when it comes to scoring points in 2012. However, that's also a tree that won't bear much fruit when the Commodores match up with more talented teams in the rest of their season.

Vanderbilt's biggest issues against UMass were a lack of discipline and a reliance on unorthodox playcalling against an overmatched opponent. We saw the latter nearly cost this team a win against Auburn last week. That same flaw cost Vandy an early scoring drive on Saturday. The 'Dores faced a fourth-and-one situation at the Minutemen 15-yard line. At that point, the 'Dores had gained a yard or more on seven of their nine runs, but Stacy had left the game and Tate had been stopped on third-and-two on the previous play.

James Franklin was faced with a few options here. He could have turned to Carey Spear for a makable 33-yard field goal. He could have given the ball to Tate again and hoped that his biggest back could move an undersized UMass line. He could have even had Jordan Rodgers keep the ball and dive up the middle to move the chains.

Instead, Franklin turned to his ace in the hole; a swing pass to the receiver. Rodgers dumped off a pass to Jordan Matthews on the sideline, and the wideout was quickly stopped for a two-yard loss. Massachusetts took over on downs deep in their own territory.

It was a play that touched on the frustrations of Vanderbilt fans everywhere. It combined this team's go-for-broke attitude with Franklin's affinity for swing and screen passes all in one. When these strategies work against teams with stronger rosters than the Commodores, it's a thing of beauty. When they fail against teams that Vandy can beat with traditional, conservative playcalling, it can be the catalyst that swings this team's momentum right back into its own face.

Fortunately for Vanderbilt, the 'Dores were able to cruise to a big win by stopping UMass on a pair of fourth-down plays of their own. It's a bit different when the Minutemen press their luck, though. They're the ones who are 30-point underdogs. They're the team that can't afford to waste a single touchdown opportunity.

It's one thing to give up field position or leave points on the board against a team with a struggling offense like UMass or Auburn. It will be another if that means that the 'Dores have spotted Tyler Bray an extra 30 yards when Tennessee comes to town in November. So are Franklin's gutsy calls the product of facing some inferior competition? Were they a chance to practice this team's execution in games where they could ultimately absorb a few mistakes en route to a win? Or will we be seeing more of these trick plays and eschewed field goals against the best remaining squads on the Commodore schedule?

It's not an exaggeration to look at one of Vandy's fourth-and-one gambles or fake punts and think that a similar play could eventually dictate the outcome of a game. Whether or not that will be good or bad for this team is still up in the air.

The PiBB Ice Player of the Week: Darreon Herring 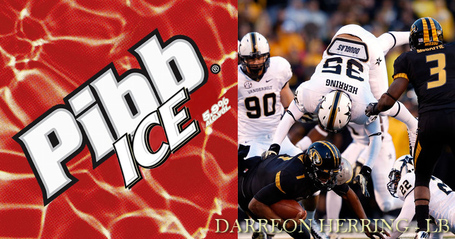 Herring was responsible for a pair of turnovers that helped lead the Commodores to victory on Saturday night. The true freshman made his presence felt all over the field, pestering UMass's runners, receivers, tight ends, and even their kick returners. His emergence has been one of the biggest reasons why Vandy's linebacking corps has developed from a preseason question mark into one of this team's strengths.