The Commodore Review: How Vanderbilt Really Looked Against Auburn

Vanderbilt escaped with a win on Saturday, but was almost done in by their own trickeration. When can the Commodores believe that they are the better team on the field?

Share All sharing options for: The Commodore Review: How Vanderbilt Really Looked Against Auburn

When you're Vanderbilt's all-time leading rusher, you're a pretty recognizable guy. So recognizable, in fact, that other teams are going to notice when you're lined up where the punter normally would be.

That didn't stop James Franklin from throwing Zac Stacy 20 yards behind the line of scrimmage in a fourth-and-nine fake-punt that was so obviously awkward that it could have doubled as an Andy Kaufmann skit. Stacy, the player that Auburn had been game-planning for since their week began, stared down the Tiger special teams unit as they shuffled into prevent mode. Once Stacy was made, the only way that the fake could have been a surprise would have been if Stacy actually punted the ball.

The ball went to Wesley Tate at the upback position, who swept to the right, met an Auburn defender, and fired off a bad pitch that was intended for Stacy but ended up on the ground. If the pitch had been on-target, Stacy would have had to cover 15 yards against a Tiger D that was swarming to the ball. While he had an open lane, the Commodore tailback still had about a 50/50 shot to convert this 4th-and-nine opportunity even if everything had gone right.

Instead, the Tigers got the ball at Vandy's 37-yard line, and an Auburn team that struggled on offense all day was given the short field they needed to get on the board.

It was another odd play in a season that has been full of them. Vanderbilt's use of the trick play has been apparent throughout this fall. Their mastery of these unusual calls has not. The Commodores have struggled with these gadget plays in 2012, and instead of lifting the team up like they had in upset bids of the past, they're helping teams like Auburn compete in games where Vanderbilt clearly looks like the better team.

That second part is the most frustrating. Vanderbilt has one of their most talented squads in school history, yet the 'Dores are playing like they need gimmicks to survive in games that they can win with traditional football. James Franklin went unorthodox to extend his first-quarter touchdown drive by converting a pair of fourth downs that covered one and two yards. Then, he handed a team that struggled to sustain drives great field position by going for it on fourth-and-nine and fourth-and-one and failing. The 'Dores squandered one last fourth down play on a Zac Stacy pass out of the wildcat formation in lieu of a 48-yard field goal attempt that would have pushed the Vandy lead to seven points late in the fourth quarter.

If nothing else, Franklin was consistent with his risk taking this weekend. Unfortunately, he won't be able to escape with a win if something similar happens against the SEC's better teams. Vanderbilt handed the Tigers plenty of opportunities on Saturday afternoon, but pulled out the victory when Auburn couldn't capitalize. The Vandy defense gave this coaching staff plenty of reasons to believe in them against a struggling opponent, but their leadership still chose gadget plays over field position when it came to fourth downs. That's not a sign of a confident team.

Maybe that's a product of playing a loaded front-half of the schedule and slipping to 2-4 early. Maybe it's just the kind of unpredictable play-calling that James Franklin wants the Commodores to be known for. Either way, it's becoming a trend in Nashville, and it is limiting an improving team that doesn't need trick plays to survive in 2012.

That's a pessimistic rant on a series of fourth-down conversions that ultimately led to seven points and a 40 percent success rate, but it's still a nagging flaw of a team that can't afford to add mistakes. There were plenty of things for Vandy fans to be happy about on Saturday, including:

The PiBB Ice Player of the Week: Zac Stacy 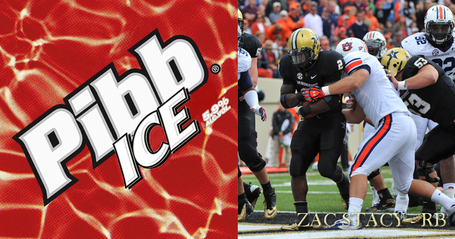 As if it would have been anyone else. Frank Mordica's all-time rushing record stood for over 30 years before Stacy broke it on Saturday. He was able to become Vandy's most-decorated tailback in school history despite playing in a platoon for his first two seasons in Nashville. Long live the Tsar.