The Commodore Review: How Vanderbilt Really Looked Against #4 Florida

Vanderbilt couldn't keep up with #4 Florida in a 31-17 loss on Saturday night. Can their defensive and special teams lapses be fixed?

Share All sharing options for: The Commodore Review: How Vanderbilt Really Looked Against #4 Florida

Vanderbilt put together a valiant effort against fourth-ranked Florida, but consistent miscues doomed the 'Dores in a 31-17 loss Saturday night. While Vandy was able to move the ball against the Gators' defense and limit Florida's passing, their inability to stop Jeff Driskel's read-option runs and lapses on special teams ultimately sunk their chances for a season-changing upset. Instead, the game got added to a list of "close, but no cigar" losses that is growing rapidly in the James Franklin era.

Florida's athleticism and innovative playcalling were what made the difference on Saturday. It became painfully clear that Driskel was in a different league of mobile quarterbacks in the second quarter when he kept the ball on a read-option and skirted down the left sideline for a 37-yard touchdown run. He confirmed that he is faster than any member of the Vandy secondary two quarters later when he outran the Commodores on a 70-yard touchdown that sealed the Florida win. The sophomore QB accounted for all three Gator touchdowns and 177 rushing yards to set a Florida quarterback record.

His post-game statements pretty much summed up Vanderbilt's biggest problem: "We kept running really, the same play, and they didn't really make adjustments," said Driskel. "So we kept going to it. If something's working, keep going to it."

That was the recurring theme on a night where Vandy was effective in shutting down Florida's other weapons. Stud tailback Mike Gillislee threatened with a few solid runs, but was limited to just 67 yards on the night. Driskel was ineffective as a passer as well - he threw for only 77 yards, much of which came through screen plays.

Still, the Gators rolled out of Nashville with a victory thanks in part to the Commodores' inability to recognize Driskel's option-keeper. That's a serious lapse that reflects poorly on this team's preparation. Vanderbilt knew that they were facing a team with a dual-threat athlete behind center, but still failed to account for his mobility. While the 'Dores did a valiant job of shutting down Gillislee, it came at the expense of letting Driskel eclipse Tim Tebow's school rushing record for a QB.

That wasn't the only way that the Gators caught Vanderbilt off guard, however. In a twist of events, it was Florida using trick plays to grind down the Commodores on Saturday night. A two-point conversation in the second quarter allowed Trey Burton to deliver the Gators a lead that they wouldn't relinquish. Later, a fake punt converted the failed momentum of a blocked Carey Spear field goal into a scoring drive and an 18-7 lead in the third quarter.

Those special teams miscues were particularly tough for the 'Dores. Aside from that 10-point third quarter swing, Vanderbilt further squandered their momentum in the fourth quarter when Zac Stacy's touchdown run was immediately followed by an Andre Debose kickoff return that gave Florida the ball firmly in Commodore territory. In fact, each time it seemed like Vandy was getting the edge in the traditional offense/defense exchanges on the field, Florida would find a way to catch this team off guard, leading to demoralizing drives and firing up a crowd that was heavily tinged in blue and orange.

Still, the 'Dores have a silver lining in the loss. Vanderbilt's offense took another step forward against Florida, even with an offensive line that allowed the Gators to record nine tackles for loss.

Jordan Rodgers left something to be desired at quarterback, but the fact remains that Saturday's game turned out to be his strongest passing performance of 2012 so far. He looked more confident in the pocket against a tough Florida rush and looked for his playmakers down the field. That meant plenty of targets for Chris Boyd and Jordan Matthews, and that's exactly what this team needs to do in order to move the ball.

At this point, Vanderbilt fans have a reasonable expectation of what Rodgers will put together on any given night for the Commodores. He's good for about 200 yards passing, a handful of screen passes, a fumble and/or interception, and some panicked decisions when the pocket collapses around him. You can also count on Matthews and Boyd to make up about 70 percent of that output.

That's not an exceptional performance by any means, but it should be enough to carry this team to key victories as the season wears on. More importantly, it appears that Rodgers is starting to get more confident as a passer while the cold weather rolls in on Natchez Trace. While he's still struggling with his accuracy, the redshirt senior is doing a better job of stepping up in the pocket to find his playmakers downfield. While he leaves himself prone to interception-creating mistakes, he's also moving the ball more effectively than he was in September. Don't let the final score fool you - the 'Dores were a few drops and fixable errors away from putting 28 points on the scoreboard Saturday night.

That's a step in the right direction, even if dumb lapses eventually kept the Commodores in an 0-22 hole against Florida. Vanderbilt has plenty to work on in practice this week. Fortunately, the gauntlet portion of their schedule is done with. Now, they'll have to prove that they can build from their mistakes if they want to return to a bowl game in 2012. 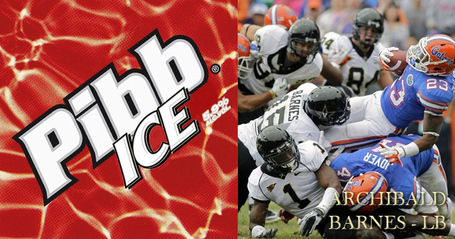 Barnes was all over the map on Saturday, and his work shadowing tailback Mike Gillislee paid off for the Commodores. Vandy held Gillislee, who had gashed LSU for 143 yards the week before, to just 67 yards on 17 carries. Barnes was a big part of that effort, stopping the Florida runner six times en route to a 12 tackle day. The 'Dores may have completely blanked when it came to stopping Jeff Driskel, but Barnes did his part when it came to slowing down the Gator attack.