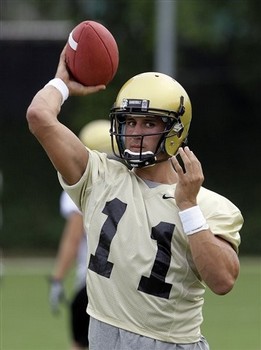 Then it happened.  Larry Smith came out of the game and Aaron Rodgers' little brother came into take a snap.  His name is Jordan Rodgers, he is a 6-2, 200 lbs, junior that, apparently, no one around me at the game knew.  He took his first snap and lasered the ball 30 yards to Chris Boyd for a beautiful touchdown (see 1:35).  It was surgical.

I stood up, made the invisible championship belt signal, looked around and people were just leaving the game.

Granted, we played Elon.  Granted, we were up by about 30 points.  Granted, it was the first game.  Granted, he took a huge sack for a loss in his next drive.  These things aren't the point.

The point here is, it is time for a new quarterback.

Larry Smith is a senior.  He has done his time behind a weak offensive line and has paid for it.  I get these things.  But with Coach James Franklin's "New Era" needs to come a "new quarterback with a better completion percentage than 48".

It is easy to point to Aaron Rodgers and start his brother because of the Superbowl ring, but this I am not doing.  I am arguing for anything other, really.  Jordan's laser to redshirt freshman Chris Boyd was enough to prove to me his ability.

You may be thinking I am crazy, that I am simply starstruck, or that I just don't know what i'm talking about.  But let me try to convince you.

Larry Smith was 13 for 27 against Elon's defense.  Elon has a 5 foot, 11 inch Nose Tackle on the depth chart.  That is as tall as me, and I didnt even play football in high school.  Their average height on the defensive line was 6-2, with an average weight of 245 lbs.  This is not impressive.  This was Elon's first go at an SEC team, and Elon's defense gave up an average of 28 points per game last season.  To a schedule like this.

Judging Smith's winning performance against Elon may be harsh, but it is needed.  We had to have 3 fourth down conversions against a defense that is in a league below us.

Smith has a career  255 completions for 535 attempts.  This is dreadful.

In the post-game press conference, Coach Franklin was asked about Larry Smith's status.

"I thought Larry did some really good things. You look at his touchdown-to-interception ratio, obviously being able to get Jordan in there and having an opportunity to play and give him an opportunity to throw a touchdown on his first pass was real positive as well. Overall, some good things. I'll have probably more feedback for you after I watch the film."

Larry Smith's career touchdown-to-interception ratio? 13-13.  He is a senior.  That is roughly 3 years of games.

But, I understand that Coach Franklin is obviously not going to start a quarterback controversy after one nice play by a backup quarterback.

But- My question is why, fellow Dores fans?

What do we have to lose?

What really will we lose?