The Commodore Review: How Vanderbilt Really Looked Against Elon

Share All sharing options for: The Commodore Review: How Vanderbilt Really Looked Against Elon

The final score of Vanderbilt's season opener tells a very different story than the statistics. 45-14 suggests a blowout, when Commodore fans know the game was a bit too close for comfort. Larry Smith's 4.6 yards per pass attempt suggest that he performed worse on Saturday than he did in 2010, but anyone who watched the game should have come off impressed by his improved accuracy and confidence. Even the highlight reel, which shows Casey Hayward's ninth interception as a 'Dore is a bit disingenuous, as the All-SEC corner had fits with FCS stud Aaron Mellette all night.

The truth behind Vandy's opener lies somewhere at the intersection of all this.

The team wasn't as good as the final score indicates. The team's offense stalled repeatedly and had trouble finding their rhythm until Elon was gasping for air in the second half. However, they were better than the statistics show. Despite the Phoenix' outgaining Vanderbilt 323 yards to 309 on the night, the Commodore offense improved on last year's half-conceived system. Dropped passes and opening night mistakes kept the team from unlocking their full potential against an outmatched FCS foe, but the ceiling for what they can accomplish may not be as high as fall practices led us to believe.

Defensively, missed tackles and a standout Phoenix wide receiver kept Vandy fans sweating until the fourth quarter. Elon, an undersized squad compared to the brutes that will visit Dudley Field during the SEC season, shrugged off arm tackles to generate first downs and threaten Vanderbilt's lead throughout the first half. Although the defense will be the heart of this team in 2011, Saturday's display of ineffective tackling was troublesome.

Let's break down the good and bad in bullet point form after the jump. Also included: our officially sponsored player of the week award.

The PiBB ICE Player of the Week Award*: 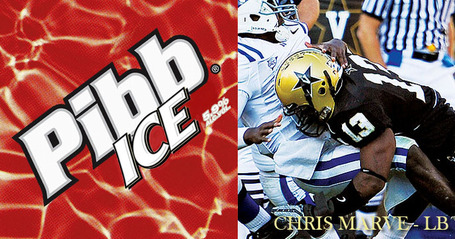 Marve ruined Elon's day, stopping drives and crushing running backs throughout the first half. He's a needed presence amongst a core of inexperienced linebackers and a legitimate All-SEC talent. He finished with 12 tackles - 2 for losses - on the day.

In all, it was a solid experience for a Vanderbilt team that came into their season opener with several questions. Though the win against Elon didn't give us any rock-solid answers, it did suggest that the team we're seeing in 2011 will be better than last year's abomination. However, we won't know more until we see what these boys can do against a legitimate FBS squad like Connecticut this weekend.

*This award is officially sponsored by Pibb Ice - the only alco-pop with the taste of spicy cherry inside. Looking for a buzz with BITE? Grab a Pibb Ice! Find it in your local grocer's beer aisle. Or maybe soda aisle, if they get confused. Whatever.