Brandon Barden Trolls Us All, There Will be No Vanderbilt Pro Combat Uniforms in 2011

Share All sharing options for: Brandon Barden Trolls Us All, There Will be No Vanderbilt Pro Combat Uniforms in 2011

As the world gasped in collective horror over Maryland's SUPERBLY AWESOME uniforms Monday night, Brandon Barden broke the news that fashion pedants worldwide had been waiting to hear; Vanderbilt's pro combat debut was coming this weekend.

Rumors immediately swirled over what the potential design could be. A molded clay bust of Lionel Richie's head incorporated into the helmet? A 5:4 scale portrait of Cornelius Vanderbilt screen printed across the front of the team's jerseys? A VANDERBILT STAR SO HUGE IT OVERLAPS FROM PLAYERS' HELMETS DIRECTLY ONTO SPRAY PAINTED PATCHES ACROSS DUDLEY FIELD?

Thanks to idiots like me, the rumor gained steam across an impatient twitter universe that was begrudgingly turning its attention toward Monday Night Raw. Only problem was, it wasn't true. 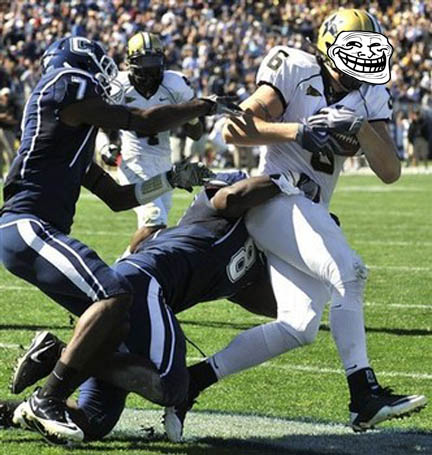 Not bad buzz for a school coming off a 2-10 season, huh? People seemed reasonably excited about Nike's potentially horrible redesign of some of the SEC's best uniforms. Until Barden hit us with a truth bomb:

All in all, an excellent troll job from the fifth year senior. It was a stretch that Vandy would have been incorporated into Nike's new campaign alongside Oregon, Georgia, and Boise State, but if Maryland could do it, why not the Commodores? (EDIT: Probably because Maryland's unis are made by Under Armour. So there's that.) When you factor in the new culture being fostered by first-year coach James Franklin, the 'Dores teetered into reasonable consideration for some horrible jerseys.

After seeing the Terrapins' triumph of Maryland pride, I think could be a great idea. More state-inspired flags should be incorporated into uniform design as a homage.

Still, Vanderbilt could incorporate three starred V's to honor their standing in Tennessee's state capital. It could be symbolic of Vandy's hometown pride and also the number of SEC wins Franklin will need to pass Fred Pancoast, Rod Dowhower, and Robbie Caldwell on the Vanderbilt all-time coaching victories list. If Nike can include some extra naval accessories to the jerseys, like say fringed shoulders or a tri-corner helmet, then that's even better.

Clearly, the public is clamoring for a Vanderbilt pro-combat revolution. Nike, let's get it done in 2011.

*Yes, we know that this isn't real news, especially since we've barely covered the Elon win from Saturday. We're working on it, jerks.