The Commodore Review: How Vanderbilt Really Looked Against #12 South Carolina

Share All sharing options for: The Commodore Review: How Vanderbilt Really Looked Against #12 South Carolina

The Vanderbilt hype train lost a bit of steam this past weekend with the team's loss to South Carolina. A stagnant offense was unable to convert on the opportunities a stout defense gave them, and the end result was a 21-3 loss in which the Commodores never really threatened the home team. The defeat ended the team's chances at an early-season top 25 ranking and evened their SEC record at 1-1.

The Vandy defense came up with four interceptions, but the team couldn't convert those into any more than three points on the scoreboard. Towards the end of the game, it became clear that the team's best shot at a touchdown was a pick-six. The team's gadget plays had no effect on Steve Spurrier's squad. Quarterback Larry Smith's inability to stretch the field, combined with the offensive line's matador style of blocking, ensured that short gains were negated by losses in three-play "drives" all night.

For the game, the offense totaled 77 yards. There were only five first downs. Smith passed for 2.8 yards per attempt DESPITE completing 75 percent of his passes. He was credited with -30 yards rushing. And somehow, things seemed even worse than the statistics suggest.

This still-evolving offense relies too heavily on extraordinary individual efforts to put points on the board. Every play seems to develop from within five yards of the line of scrimmage. This is great when guys like Zac Stacy and Jerron Seymour can break a few tackles and get downfield, but falls apart when a fast defense like South Carolina's can stop these quick patterns in their tracks. That's how a player like Smith ends up averaging less than four yards per completion. His longest pass of the day went for nine yards. Three Vandy passes ended in losses on the night.

Outstanding individual efforts can carry this team against squads like UConn and Ole Miss, but Saturday's game versus South Carolina was a rude awakening for James Franklin and his crew. They'll have to take a good hard look at the quarterback position and weigh Jordan Rodgers against Smith to start next week's game against Alabama. Smith left Saturday's tilt with a neck stinger but says he'll be ready to go in Tuscaloosa. Franklin suggests he'll be taking the team's snaps as long as he's healthy.

If that's the case, Nick Saban will probably have a good idea of what to expect. Short passes, and lots of them.

Good/Bad analysis and the PiBB ICE Player of the Week are after the jump...

The PiBB ICE Player of the Week: Casey Hayward 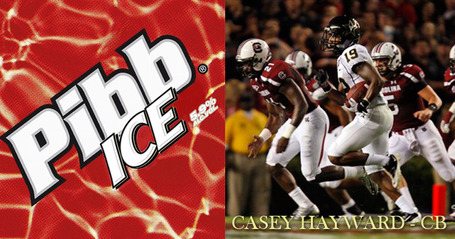 Hayward caught as many passes from Stephen Garcia as Alshon Jeffery, effectively taking the All-American out of the game. His first quarter picks sent a message to the Gamecocks, forcing Garcia to target other receivers all night. He has four interceptions already this season and is making a case to become a high-round selection at the 2012 NFL Draft.

*Yes, I realize that this column is about three days late. No, it's not because Vanderbilt lost. It's because I was in the middle of a 26-hour drive from Florida to Rhode Island to help a friend U-Haul everything he owns 1400 miles up Route 95. THAT'S why you want me as the best man in any prospective weddings you may have coming up.