The Commodore Review: How Vanderbilt Really Looked Against Ole Miss

Share All sharing options for: The Commodore Review: How Vanderbilt Really Looked Against Ole Miss

It started with the statue of liberty.

Facing 2nd and 14 in the second quarter of an ugly and scoreless game, Larry Smith dropped back and faked a pass down the middle of the field. In one smooth motion, he dipped the ball behind his back and into Zac Stacy's waiting hands. Stacy cut through and enormous hole and into the secondary, where Chris Boyd held his cornerback in check long enough for his tailback to ramble into the red zone. Two plays later, Vanderbilt was on the board.

When the Commodores scored in the second quarter, the effect was palpable. Smith's touchdown run shook off the doldrums of a terrible opening performance and sparked this team to life. The result was a frenzy of confidence and intensity, with every player contributing. Need evidence of that? Look at the blocking on Trey Wilson's 52-yard interception return for a touchdown. Every black jersey on that field is queued up to blast someone to get Wilson to the end zone. It's at the :50 mark of this awesome video from the official Vanderbilt website.

That effort is really all you need to know about this game. This team was more fired up than they've been since the end of the 2008 Music City Bowl. The offense, thanks to gadget plays and a slashing running attack, was the most fun we've seen in Nashville since the Cutler-to-Bennett days. James Franklin has these kids believing that they belong in top level of the SEC, and almost every aspect of their play, from Jerron Seymour's grinding runs to Tim Fugger's jacked-up hits reflect that.

There's still work to be done. A lot of work to be done. The first quarter suggested that this game could exceed the potential for ugliness that VU-Ole Miss usually provides. The passing game still only garnered 106 yards in the air. Penalties nearly clipped some impressive drives early in the game.

Even so, it's hard not to be impressed by Vandy's 30-7 victory this weekend. That confidence will flow through this team all week. If the Commodores can translate that into production on the field Saturday night in Columbia, then this team could climb back into the national rankings for the first time since that 2008 season.

The Good/Bad Breakdown and the PiBB ICE Player of the Week Award are after the jump...

The PiBB ICE Player of the Game: Zac Stacy 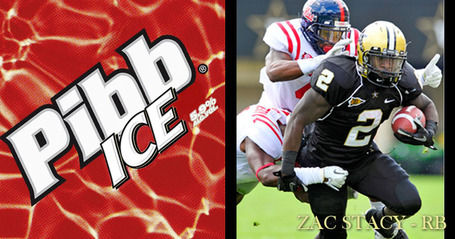 This could have gone to several members of the defense, particularly Trey Wilson after his two-interception, one-touchdown day. However, Zac Stacy's career day won the esteemed PIVPOTW title this week. His 169 yards on the ground were a personal best. Stacy finished the day with an insane 15.4 yards per carry average. He's helping ensure that Warren Norman isn't rushed back into action for the Commodores. When he returns, Vandy will have a staunch three-headed attack at tailback.