Share All sharing options for: Vanderbilt Football: Getting to know Ole Miss

The Vanderbilt Commodores continued to show that it is a new era in Nashville last week in giving away a solid lead and then coming from behind to dispatch Connecticut. Franklin and company boast a perfect kill ratio of 1.00 for the 2011 campaign. This is the briefing on their next target.

Week 3 Target: The University of Mississippi 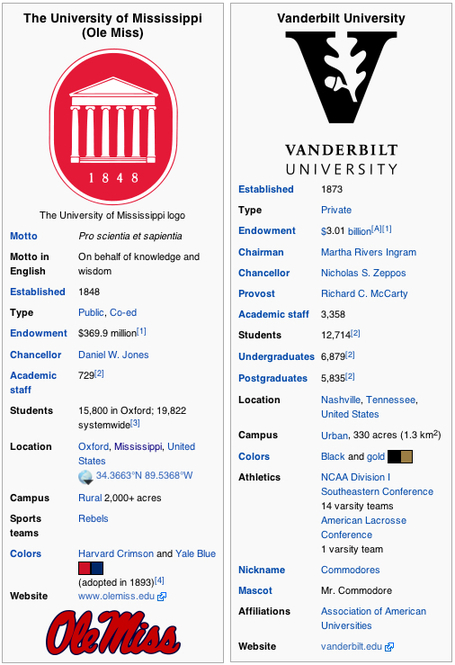 Most of this was taken straight from the Mississippi game notes. The information is theirs. We are just saving you from the PDF monsters.

Vanderbilt fans can quickly point back to the Music City Bowl campaign of 2008 for the team's last three-game win streak. Finding the last head coach to start his Commodore career 3-0 is a bit tougher task.

You have to go back to World War II when E.H. Alley went 5-0 as a first-year head coach in 1943. Throw out the WWII years and you'll eventually come to a coach named McGugin. In 1904, Dan McGugin's first at Vanderbilt, the Commodores went 9-0, outscoring opponents by a crazy accumulative score of 474-4.

The Rebels have had twenty-six players make their debut so far this season.

QBs: The Rebels returned only one scholarship quarterback from last season's roster in Jr. Randall Mackey, who redshirted a year ago. New QB arrivals in Oxford are Barry Brunetti and Zack Stoudt. Mackey was a first team All-American quarterback in 2009 at East Mississippi Community College, where he racked up over 3,700 yards and 37 TDs. Brunetti comes to Oxford after playing at West Virginia last season, where he appeared in four games in limited action. Stoudt, a JC transfer, threw for 1,812 yards and 18 TDs last season at Iowa Western en route to first team all-conference honors.

RBs: The Rebels return three of their top four rushers from a year ago, including senior Brandon Bolden, who tied the single-season Ole Miss record with 17 total TDs (14 rushing). Bolden led the squad with 976 yards rushing and 1,320 all-purpose yards, finishing fifth in the SEC in rushing with 81.3 yards per game. His 2,132 career rushing yards ranks seventh in school history. He is just 928 yards behind Deuce McAllister's school record of 3,060 yards. Joining Bolden in the backfield is senior Enrique Davis and sophomore Jeff Scott. Davis ran for 368 yards and three scores, while Scott also added three touchdowns.

WRs: Ole Miss returns its top three pass catchers, but must replace a pair of senior starters. RB Brandon Bolden was the Rebels' leading receiver last season with 32 catches, while Jr. Melvin Harris (30) and So. Ja-Mes Logan (29) were second and third, respectively. Harris and Bolden also tied for second on the team with three receiving TDs each.

OL: The Rebel O-Line returns all five starters from a unit that lead the SEC in sacks allowed (14) and finished third in rushing (207.6 YPG) a year ago. The Rebel OL has combined for 72 career starts and has seven players that have started at least two games in their career.

DL: Despite losing three tackles, Ole Miss returns a good amount of experience along the defensive front, which last year ranked 19th in the nation in tackles for loss (6.83 TFL per game). Kentrell Lockett returns for a sixth season after tearing his ACL early last season. Lockett is the SEC's active career leader with 23.5 TFL.

LBs: Rebels replace two starting linebackers from last season. Jr. D.T. Shackelford was expected to be a defensive leader this season but suffered a right ACL tear in the spring and is not available at the start of the season.

Special Teams: Ole Miss returns both kickers from a special teams unit that was one of the best in the SEC and nation. Junior P Tyler Campbell led the nation with 46.37-yard average and ranks second in Ole Miss history with a 45.4-yard career average. Campbell booted 19 punts over 50 yards a year ago and landed 13 inside the 20-yard line. Jr. K Bryson Rose turned in an exceptional debut campaign a year ago after converting 16-of-18 field goal attempts and finished third in the SEC in field goals. Rose led the team in scoring with 91 points and hit on a career-high five FGs against Louisiana-Lafayette. So. KR Jeff Scott is back after finishing third in the SEC and 20th in the nation with a 27.7-yard kick return average.