The Commodore Review: How Vanderbilt Really Looked Against UConn

Share All sharing options for: The Commodore Review: How Vanderbilt Really Looked Against UConn

Saturday's game didn't earn the Commodores any style points, but it did allow Vanderbilt to match last season's win total just two weeks into the 2011 campaign.

Coach James Franklin improved his record to 2-0 with a 24-21 victory over UConn Saturday night at Dudley Field. The Commodores overplayed expectations, besting Vegas's two-point spread, but the real story here is how the team pulled off the win. Vanderbilt pissed away an 11-point halftime lead in devastating fashion, but showed the resolve to overcome adversity and pull off a resume-building win over a BCS opponent.

Sure, Connecticut's terrible offense played a role in the comeback, but the impact for this veteran-laden team is clear. This simply wasn't the kind of game that the "same ol' Vanderbilt" grits out. When the Huskies fell on Richard Kent's blocked punt in the end zone, fans everywhere felt their stomachs turn. When Yawin Smallwood rumbled 64 yards after some of the worst pass blocking Nashville has ever seen, it was tough to think that the 'Dores could come back. It looked as though mistakes would squander a stellar defensive effort and sink this season before the leaves could change in Nashville. You could almost hear recruits jumping off the bandwagon.

Then it happened. Casey Hayward made a statement interception, then returned it 50 yards for a touchdown as if to say "Hey, don't put this bullshit on the defense." Minutes later, Zac Stacy would put the team on his back and rumble 48 yards to set up the game-winning field goal. Though there was still time for UConn to come back, the momentum was rushing back into Dudley Field. The sucker-punch feeling was gone. There was no way that the Vandy defense was going to give up a two-minute drill touchdown.

Vanderbilt won a game in which they normally would have folded. The last time I can remember this team reversing expectations like that was back in 2008 against Ole Miss, where Chris Marve and the 'Dores used turnovers to pull out a big win in Oxford. That season, of course, brought ESPN's Gameday to the Peabody campus and ended at the Music City Bowl. Can 2011 be the year that the team finally follows up on that team's promise?

Good/bad analysis and the PiBB ICE Player of the Week Award are after the jump...

The Vandy defense proved that they can win even if the team's offense gains less than 260 yards for the game. However, that'll be a much tougher feat against teams like Florida, South Carolina, and Alabama. While the strength and resolve of this team is laudable, the offense is going to have to get better in order to give players like Marve and Hayward a proper sendoff in 2011.

The PiBB ICE Player of the Week Award*: Rob Lohr 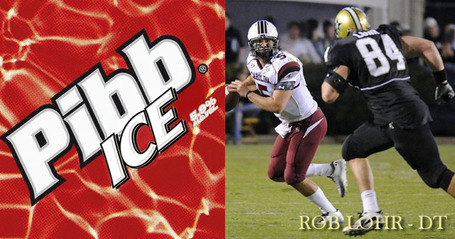 Rob Lohr made his presence felt with four tackles for loss against the Huskies - a stat that makes sense when you consider the he was the team's co-leader in that category in 2010. He single-handedly pushed UConn back 12 yards behind three running stops in the backfield, but it was his fourth quarter sack that helped quell a Husky rally and lock down the Vandy victory. He's emerging as the leader of this team's underrated defensive line.