UPDATE: James Franklin confirms Carta-Samuels's transfer. Does this mean he'll be less likely to recruit more QBs in his 2012 class?

Earlier this year, we linked to a brief report that former Wyoming QB Austyn Carta-Samuels was apparently transferring to Vanderbilt. There were a lot of questions; none of them were answered. As quickly as the story came out, it died. There was nothing -- no press release from Vanderbilt and not a peep from the quarterback himself.

Later in the summer, it appeared that Carta-Samuels had instead settled on Arizona as his ultimate destination. Curiously, when it came time for players to report for camp, Austyn was a no show.

Word today from the Casper Star Tribune is that Austyn Carta-Samuels WILL be transferring to Vanderbilt. He will not be eligible until 2012, per NCAA rules, when he will have two years of eligibility remaining.

So who is this mysterious quarterback? Let's take a closer look while we await official confirmation from Vanderbilt.

A dual-threat quarterback, Austyn Carta-Samuels was the 2009 Mountain West Conference freshman of the year in 2009. Click here to see his University of Wyoming bio. 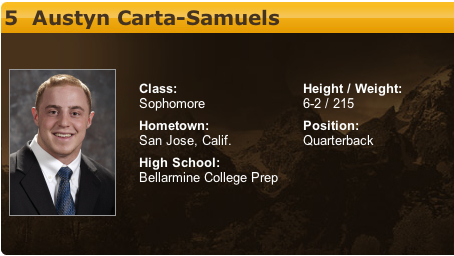 via University of Wyoming Athletics

While he won't be able to directly impact the Commodores this season, he will be another invaluable participant in practice, further adding to the competition at the quarterback position. What kind of impact do you think he'll have in the 2012 and beyond?