Share All sharing options for: Know Your Enemy: The Oregon State Beavers

Vanderbilt will host its first ever Super Regional this weekend, and its opponent will give the team the opportunity to play like it's 2007 all over again.

Oregon State will finally make an appearance in Nashville, four years after a 10th inning Michigan home run kept the SEC Champion Commodores from hosting the Beavers in Super Regional play at the NCAA Tournament. Vanderbilt and Oregon State had been on a collision course that year, with the #1 ranked team set to face the defending national champions in a showdown that would determine who would move on to Omaha.

Unfortunately, that matchup wasn't to be (we all know why, now let's never discuss it again), and the Beavers ran through Michigan and to their second straight NCAA Championship.

Four years later, the two will finally meet with a College World Series berth on the line. The teams have a bit of a backstory leading up to their 2011 matchup thanks in part to Baseball America's Top 25 rankings. While most national rankings put the Beavers in the 6-10 range throughout the season, BA's Aaron Fitt positioned Oregon State as highly as #2 as the season wore on. This was often higher than the Commodores, who were a staple of the top three throughout the year. Since Vandy fans have nothing better to do in the spring than complain about perceived slights, this led to a minor crapstorm on Fitt's Twitter and weekly chats.

The Commodores will now have the opportunity to definitively prove that they deserve a higher ranking than the Beavers. However, they'll have to get past a pair of aces and a solid OSU lineup in order to justify months of angry fan tweets to @AaronFitt. 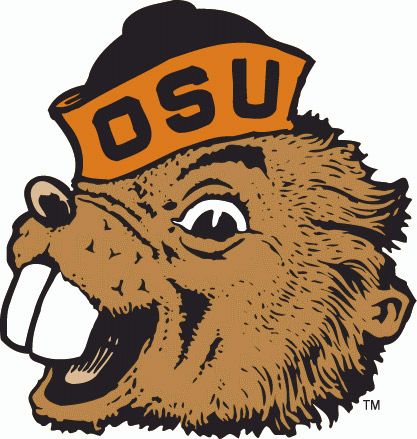 Beyond, the Chief Wahoo of Beavers. That's species-ist, OSU. via www.princetonbasketball.com

Oregon State (USA Today Rank #16): The Beavers had a solid grip on the Pac 10 title and a national seed before falling apart to end their season. OSU went 1-5 in their final six games of the regular season, losing to a pair of teams that didn't qualify for the NCAA Tournament, and ended up tied for second in the competitive conference.

Fortunately, Oregon State was able to get their season back on track by storming through the first round of tournament play. The team rolled past Arkansas-Little Rock, Creighton, and Georgia to earn their spot in the field of 16 and a trip to Nashville. However, whether the team can sustain this momentum on the road - or whether the mistakes of the last two weeks of the season will rear their ugly heads again - will remain a question mark until Friday's action.

Best Win: A three-game sweep over #11 Arizona State (5-3, 7-6, 9-6). Oregon State followed this up with a sweep of Stanford, and Aaron Fitt's analyst-crush began in earnest. Probably because these were all really good wins.

Worst Loss: A three-game sweep at the hands of Oregon (1-4, 1-4, 0-6). The Beavers got rocked by their biggest rivals in a series that cost them the Pac 10 title. That's a kick in the balls right there.

Batter to Be Wary of: Andrew Susac. Oregon State doesn't have any traditional mashers. Two players share the team's home run lead with five, and Parker Berberet's 37 RBI are five more than any other player on the Beavers' roster. Susac was the first Beaver taken in this week's MLB Draft, going 87th to the San Francisco Giants. He's a gritty player with decent power and a tough presence behind the plate. Though he missed a chunk of the season with a broken hammate bone, he's come back to post a solid season and seems to be getting stronger with every week. If this is potentially his last game wearing black and orange, expect him to fight tooth and nail in every at-bat.

Key Stat: Oregon State's HR and RBI leaders would place fifth and sixth amongst Vanderbilt's hitters in their respective categories. The team has a solid lineup 1-9, but their strength in 2011 has been their prowess on the mound.

Pitchers to Watch: Pick your poison. Sam Gaviglio went 12-2 with a 1.87 ERA and 113 strikeouts in 115 innings. Josh Osich struck out 79 batters in 76 innings and recorded a monster no-hitter (one walk, 13 strikeouts) in a key game at UCLA this season. Both are outstanding players, and their matchup against Sonny Gray and Grayson Garvin will make this a key series to watch for anyone who likes great pitching.

UPDATE: Osich looks to be unavailable for the Beavers this weekend due to inflammation in his shoulder. This could be a huge boon/blow depending on your collegiate affiliation. [KJIV]

An upcoming Q and A session with Building the Dam's ConnorOSU should help shed more light on the Beavers' impressive pitching tandem and some other elements of the team. Stay tuned for that, as well as however much Super Regional coverage we can fit in between weddings here at AoG.