Only one team in the country can match Vanderbilt's torrid pace over the past two weeks of the NCAA Tournament. Unfortunately for the Commodores, it'll be the team they face in the opening game of the College World Series Saturday afternoon.

Third-seeded North Carolina will be the first obstacle in Vandy's path to a first-ever men's national championship. The Tar Heels bulldozed through Regional and Super Regional play to earn their fifth trip to Omaha in six tries, but the school has yet to earn the coveted College World Series dogpile. In fact, an ACC hasn't won a national title since Wake Forest's victory in 1955.

UNC's season has ebbed and flowed throughout the spring, with more high points than low throughout the season. The team has defeated spartan squads like #6 Florida State and #1 Virginia (a sweep) but also lost to sub-.500 Wake Forest and lost three games to an underwhelming North Carolina State team. Though the Tar Heels couldn't navigate through the minefield of the ACC Tournament, losing to #23 Miami and Virginia on their way to a quick exit, they quickly rebounded to starch three opponents in five straight games back home in Chapel Hill.

On Saturday, they'll be the grizzled veterans of Omaha while Vanderbilt will be the wide-eyed neophytes. North Carolina has made so many trips to Nebraska in the past six years that they've earned a completely free stay at the local Best Western this time around. Will their skill and savvy be enough to hold off the upstart Commodores? Or will Vandy win the battle of streaking teams? We'll take a closer look at the Tar Heels after the jump. 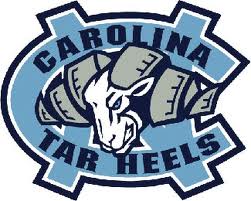 Best Win: A three-game sweep of #1 Virginia (6-0, 2-1, 3-2). UNC proved they could win close, high-pressure games in their regular season finale. Though the Cavaliers would take revenge in the ACC Tournament, North Carolina made a major statement with three wins in May.

Batter(s) to Be Wary of: Colin Moran and Tommy Coyle. Morgan is UNC's triple crown winner, leading the team in home runs, RBI, and batting average by a wide margin in all categories. The freshman third baseman mashed all season for the Tar Heels, leading the ACC with 69 RBI in 64 games. A solid showing in the Super Regional (2-6, one run scored) suggests that he might not be rattled in his first trip to Omaha.

Coyle, a speedy second baseman, has often been the benefactor of Moran's mashing. He was seventh in the league in runs scored (57) and has stolen 18 bases in 2011. Though Coyle's spot in the lineup has varied, he's proven to be a dangerous presence whether he's batting second or sixth.

Key Stat: North Carolina has excelled at stringing together hits and utilizing walks/baserunners to create runs. The Tar Heels are averaging 1.4 hits per run scored on the season. Their opponents have had to post an average of 2.23 hits for each run in 2011. Comparatively, Vanderbilt's mark was 1.54.

Pitchers to Watch: Patrick Johnson and Kent Emanuel. Johnson went 13-1 with a 2.27 ERA, but ceded national attention to conference rival Danny Hultzen at Virginia. A senior and the 25th round pick in the MLB Draft, Johnson struck out 120 batters in 105 innings this year, leading the ACC in batters struck out looking.

Kent Emanuel, the Heels' number two starter, placed second on that leaderboard. Though the Commodores are unlikely to see him, his abilities help define the state of pitching in Chapel Hill. Both starters work with solid control and movement around the plate. The 'Dores will have to be patient against a pitching staff filled with players that can induce strikeouts with finesse instead of simply raw power.