Schadenfreude Fridays: The Awesome Failings of the Ultimate Warrior

Share All sharing options for: Schadenfreude Fridays: The Awesome Failings of the Ultimate Warrior

The 1980s were the high water mark of professional wrestling. The niche market of "sports entertainment" exploded onto the mainstream behind the force of Hulk Hogan and the united front of the World Wrestling Federation. Weekly television programs, Saturday morning cartoons, comics, and even ice cream was co-opted from what had been simple regional attention to the national stage. 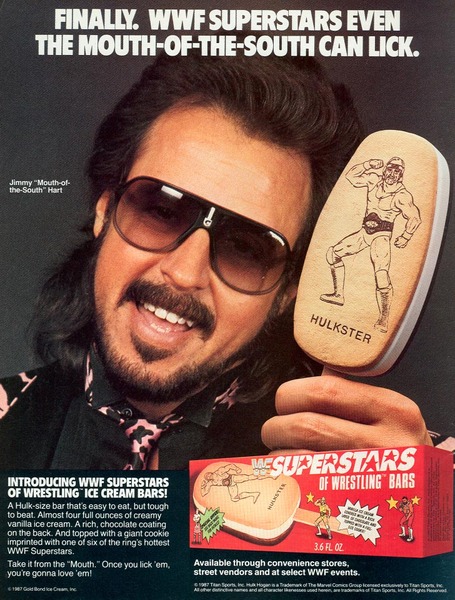 The Hulkster was drawn on using toxic ink and the ice cream was 35% soap, but it was absolutely worth it. via www.awesomehq.com

This era gave America some of its greatest heros and most brilliant xenophobic caricatures. Rowdy Roddy Piper taught us that all Scots are surly, churlish dicks who want nothing more in life than to make you look like an asshole. The Iron Sheik prepared us for decades of ongoing strife with Iran. Nikolai Volkoff taught us not to trust the Soviets, and later, once the WWF resolved America's Cold War tensions, to trust them. Hacksaw Jim Duggan paved the way for Toby Keith by proving that patriotism needed no baseline level of intelligence as long as you carried a big flag and yelled a lot. And the Ultimate Warrior taught us never to trust anyone from Parts Unknown.

Unlike the wrestlers I just mentioned, the Warrior's gimmick wasn't wrapped in stereotypes but in sheer lunacy. His body and frenetic movements were a shrine to 80s excess of steroids and cocaine. His promos were assaults on literacy and comprehension. His moves in the ring suggested that he was an alien spacecraft being controlled by a tiny drunk creature hunkered down somewhere in his head. His mannerisms on and off camera seemed to confirm this.

By these powers combined, the Ultimate Warrior was awesome.

Jim Hellwig - whose legal name is now, no shit, Warrior - rose to WWF stardom behind an incredible persona and few in-ring skills. The man garnered legions of fans despite a basic inability to wrestle or speak coherently, running solely on charisma to climb through the ranks. His wildman, rope-shaking, ball-of-energy style and huge frame made the Warrior a top sell for the company, but thanks to his sheer ineptitude and batshit insanity, his run at the top was brief.

His abject lunacy and inability to work with anyone even culminated with the WWE releasing it's own feature DVD on the man; The Self Destruction of the Ultimate Warrior. When things get so bad that the company that inducted Pete Rose to its Hall of Fame goes out of its way to call you a fuck-up, it might be time to reevaluate things.

But what made the Ultimate Warrior Schadenfreude-worthy? Three things.

The Ultimate Warrior's pre-fight promo videos play out like Salvatore Dali's contribution to professional wrestling. The Warrior's talking segments made Andre the Giant, a mush-mouthed leviathan posing as a Frenchman, seem eloquent by comparison. His shtick was simple - oil up his body, stare intensely at the camera, snarl and pant like a man who had just been pulled from the bottom of a pool, and unleash a stream of consciousness rant that played out like someone's bad peyote trip. Make no mistake, this man is a goddamn psychopath:

In case you can't watch the video, this is a greatest hits compilation which include references to: falling off the tallest building in the world, being trampled by elephants in Africa, loading spaceships with rocket fuel, being a freak of nature that's beginning to swell, being sponsored by the Gods above, burning out the fuses in the exit signs throughout the arena, calling on his "little warriors" to dig their claws into his tendons and breathe air that smells of combat, opening the skies with his own brute power, having nightmares be the highlight of his day, the 8th wonder of the world, a failure to understand normal people, and whatever other words he could string together while simultaneously flexing and yelling.

Did you see how many cuts that video had? Every sentence was taken from a different promo, and each was more blindingly insane from the last. If the Warrior had been talking anywhere other than a WWF locker room, he would have been tased more times than a drunk Phillies fan at Citizens Bank Park.

At the time, promos were pretty much the only way for wrestlers to communicate with the outside world, and Hellwig took every step to convey that he was just as numbingly rabid as a man who wore underwear, arm bands, and face paint to work every day should be. Somewhere in the basement of WWE headquarters is a vault filled with weeks of unused Warrior promo footage. Legend has it that these tapes would later become the basis for the Japanese film Ringu.

None of this, however, could compare to the Ultimate Warrior's masterpiece. Wrestlemania VI was planned to be his big break, with Hellwig winning the world championship from Hulk Hogan at wrestling's flagship event. In order to sell the magnitude of this match, the Warrior topped off his crazy levels and delivered a monologue that's as brilliant as it is vaguely criminal:

Holy shit! Did he just say he was going to jump on Hogan's plane, murder the pilots, and force that bitch into a tailspin? Hogan's wife divorced him and his son got in a car crash that left a guy braindead ...and he still thinks this promo is the worst thing to every happen to him. Fake or not, this is probably 30% of what Hogan discusses with his psychiatrist every week.

In-Ring Routine: Like Hogan before him, the Warrior was an impressive looking specimen who couldn't wrestle worth a damn. His in-ring tactics boiled down to two basic tenets - running around like a maniac, and then picking his opponents up and dropping them. Hellwig's finishing move was just that:

The Warrior's status among other wrestlers was astoundingly low for a guy who had so much credit with the fans. His combination of power moves and the lack of coordination to pull them off made his matches about as safe as a county fair log flume. WWF announcer Jim Ross suggested that "Ravishing" Rick Rude had "the patience of Job" to work with the Warrior in a series of matches. Andre the Giant wasn't nearly as complacent, and returned Hellwig's follies by cracking him in the face with his canned-ham sized fists on several occasions.

The WWF would eventually get a measure of revenge on Hellwig by putting him in a storyline that had him "cursed" by witch doctor Papa Shango. This called for the Warrior to do things like bleed black goo from his scalp and vomit up unholy amounts during promos. This set the bar of lunacy high for the wrestler's other kayfabe plots, which would include (but are not limited to): being bitten in the face by a cobra, being locked in a coffin and buried alive, lighting Hulk Hogan's face on fire (not entirely planned), and using more knockout gas on opponents than a raid on the Dubrovka Theater.

His Post-Wrestling Career: After wrestling, Hellwig - excuse me, Warrior - embarked on a series of post-retirement plans that had no capacity for anything other than failure. His most successful venture into the world of lunacy came in 2005, when he was invited to speak in front of a crowd of students at the University of Connecticut, who apparently wanted to remind students that they are a basketball team only and not a real school.

Warrior had since reinvented himself as an ultra-conservative public speaker, and the university's College Republicans decided the best man to address their campus was one whose most famous body of work involves running full speed to a wrestling ring and shaking like a maniac. It went about as well as you might think:

Highlights of the hour-long speech included things like: "Queering doesn't make the world work," telling a male student who disagreed with his views on homosexuality that "I can't hear you, you got to take that object out of your mouth", bowing and repeatedly yelling "Shalom" at a guy who just happened to look vaguely ethnic, and most despicably, disparaging Kwanzaa. Somewhere in 2005, Glenn Beck stood in silent reverence, a single tear running down his cheek.

The College Republicans immediately apologized to their campus for letting a lunatic roam amongst them. Warrior almost instantly penned a response, titled hilariously "From the Desk of Warrior." He called the student group pussies and then went back to sending harassing letters to Toby Keith for not being xenophobic enough.

His spiral of awesome shame doesn't end there, however, Hellwig's repeated attempts to cash in on his Warrior fame are the stuff of legend. His most notable tie-in was the Warrior comic book, in which Hellwig restores the original message of Christmas by beating and raping Santa Claus. 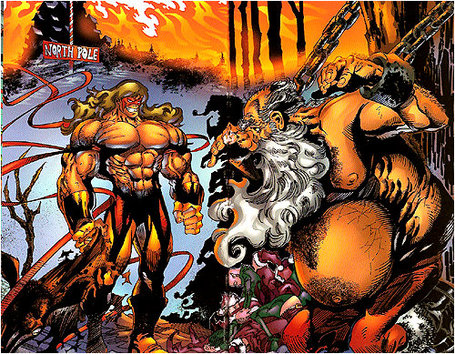 No, that wasn't a joke. via www.i-mockery.com

Other notable ventures include creating his own eBay shop where he sold Ultimate Warrior memorabilia at significant markups ($23,500 for a WWF Championship belt!), a series of drawn out legal battles with the WWE over the rights to the name "Ultimate Warrior", appearances on Hannity and Colmes and C-SPAN, and various shouting matches with feral animals over their reproductive rights (I'm assuming).

The Ultimate Warrior was a supernova of energy and insanity that engulfed the childhoods of kids across America in the late 80s and early 90s before becoming a beacon of repressed memories when his lunacy shone through to the surface. Hellwig was an awesome force in wrestling identifiable to almost any man aged 25-35 right now; a man whose wrestling persona bled through to his core and created the closest thing we might ever have to a real-life Batman supervillain. Jim Hellwig, aka Warrior, is still an icon through and through, but probably not in the way anyone had imagined back in 1990.

His descent from wrestling heir to Hulk Hogan's throne to cast-aside pundit is impressive in its sheer magnitude, but judging by his career, maybe not entirely unexpected. In a decade's time, Hellwig went from superstar of a blossoming entertainment market to a public figure few can understand and even fewer want to associate with.

For that, we salute you.