Today's entry dives into the world of mixed martial arts, where failure is a common thread outside of the UFC. Entities like Extreme Fighting, PRIDE, and the International Fight League folded after varying degrees of success thanks in part to the competitive pressure of the Ultimate Fighting Championship. Even the UFC's most viable competitor, Strikeforce, couldn't hold out as an independent promotion and were recently bought out by the brand that has become the NFL of MMA. And while these promotions left with some form of dignity and some memorable fights (especially in PRIDE's case), two organizations boldly said "Fuck you" to self-respect and collapsed in upon themselves like dying supernovas. These stalwarts of athletic failure were Elite XC and Affliction.

Both organizations have gained a presence in the public mindset over the past 4 years. Affliction is a familiar name for those of us who hang around douchebags regularly, a t-shirt company that jumped from sponsorship to matchmaking for reasons unknown to most. A shameless "couture" style company, they pride themselves on producing clothes with more hearts, skulls, wings, and script writing per square inch than Ed Hardy. Elite XC, on the other hand, made waves by being the first MMA organization to ink a major, non-cable television deal when they signed on with CBS to broadcast six events a year. Three cards later, it was all over. Today, we'll focus on their complete inability to understand the sport they sought to promote.

Elite XC was short for "Elite Xtreme Combat," and with a name like that, many understood that its shelf life was limited. Its parent company was run by boxing promoter Gary Shaw, who put his son Jared in place as the public face of the Elite XC management. This was a mistake, as the younger Shaw was a douchebag (Rapper name: $kala. Tentative reality show title: Blood, Sweat, and Bling. Neither statement is fiction). Right off the bat, things weren't exactly built for longevity with the promotion.

Despite the potentially insane decisions going on at the highest levels of management, the company was able to build a moderately talented roster of young talent and UFC castoffs. Guys like Jake Shields (fighting for a UFC title this month), Nick Diaz (Strikeforce champion), Antonio Silva (possible mutant), Gina Carano (lovely), and Paul Daley (asshole) dotted the promotion's lineup alongside veterans like Phil Baroni (likable asshole), Charles Bennett (lunatic, felon), Paul Buentello (fatty), and Roy Nelson (ditto). Of course, the company was able to pull in this talent by buying out regional showcase shows like King of the Cage and Cage Rage, which gave the company a virtual monopoly on shitty company names for cage fighting but also drained Elite XC of almost all their cash assets. In less than two years the brand had grown into one of the biggest in the industry, but wasn't making anywhere near the amount of money needed to be viable.

With a stable of solid but relatively unknown fighters on board and few usable assets, the company had to make a bold statement to earn credibility. A move that would bolster the company's talent and force competitors to take them seriously in the emerging field of MMA. Something that would legitimize the sport as it moved towards its first ever national primetime broadcast. A spectacle that would make Elite XC the brand that people went to when they thought of combat sports.

But that would have been too much work, so the Shaws said "fuck it" and brought this guy in instead: 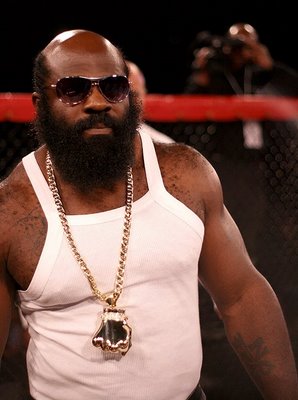 The face of a $55 million investment. via www.nerdsociety.com

Don't let the tank top fool you; Slice had the image and physique of a warrior. A quick search on any video hosting site will return handfuls of clips of Slice pounding other people's faces into hamburger meat while a crowd of onlookers took time away from their barbeques to watch two enormous men swinging blindly at each other. Slice had a storied four-year street fighting record before making his cage debut, but was still clearly a work in progress when it came to mixed martial arts. Important tools like wrestling, the clinch game, and jiu jitsu were almost entirely foreign concepts for the heavyweight. By 2007, Kimbo Slice was much more of an image than a fighter - but that image was big enough to make him the posterboy for Elite XC. In a year's time, Slice had become the patron saint of terrible planning.

The bearded spectre was a headliner or co-headliner for every Elite XC card he was on from the very start of his professional career.  He progressed from pummeling a 38 year old tomato can (Bo Cantrell) to beating a 42 year old has-been (Tank Abbott) to a showdown with James Thompson, a British goliath known for his ability to tire himself out during intense staredowns. Part of this was due to neck fatigue from trying to to prop up a cauliflowered ear that was approximately the size of a grapefruit. 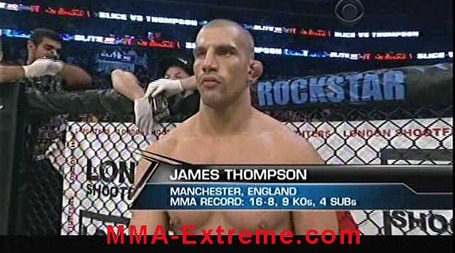 Yeah, that thing is looking ripe. via www.mma-extreme.com
Slice was a veteran of two full professional fights and Thompson's ear was packed fuller than a Cinco de Mayo pinata, so it made all sorts of sense for the promotion to make this fight the headliner of the first ever MMA card on network television. A youtube sensation and a British guy who was a few beatings away from looking like a character from The Goonies; what could go wrong?
Of course, Thompson, a guy on a 1-3 tear that included a loss to Butterbean in Japan, took it to Slice on the ground, an area where the relative MMA neophyte was barely literate. The Brit was leading on the judges' scorecards heading into the third and final round by using takedowns and establishing control over Slice against the cage. Jared Shaw, professional that he is, countered by screaming at the referee to stand the pair up every time the fight hit the canvas. The ref eventually obliged Shaw's request, and a winded Slice eventually found the sweet spot on Thompson's ear, which at that point must have been glowing like a sigil in Shadow of the Colossus (nerd joke!). It was enough to stop the fight and improve Slice to 3-0 as a professional.

Critics weren't amused, however. The show's main event focused on two relatively unskilled giants leaning on each other for two rounds until Thompson's ear exploded like an overfed mosquito. Their second primetime show was a ratings disappointment on CBS, despite featuring proficient fighters like Jake Shields, Nick Diaz, and Robbie Lawler. It was clear that Elite XC would have to outdo themselves for their third national broadcast. In search of answers, they turned back to their trump card: 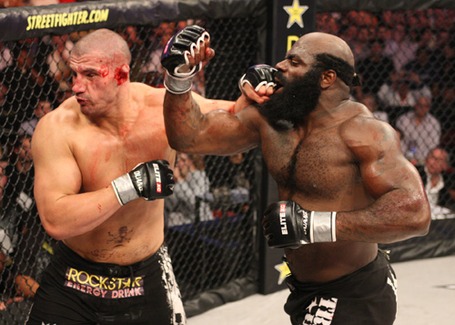 Annnnd...pop. via www.411mania.com
Slice was tabbed to compete against another fading legend in what could have been billed as the battle of name recognition. Ken Shamrock, a 45-year-old former UFC and WWF star, stepped up for a fat paycheck and the opportunity to continue his sad decline in the sport. "The World's Most Dangerous Man" was on a five fight losing streak that began with his release from the UFC and devolved into an inability to pick up a win even in regional shows. Fortunately for Elite XC, his name alone still carried a lot of goodwill amongst casual fans and Shamrock - roided to the gills - still looked the part of a professional fighter.

Things were in place for the showdown with Slice to be a relative triumph in the company's turbulent history, but somehow betting on a dozen different wild cards at once failed to pay off for Elite XC. Shamrock suffered a cut in warmups the day of the fight (wait, what?) and Seth Petruzelli stepped in to take his place. Petruzelli was smaller than Slice, but could actually fight - though Elite XC did their best to convince him to, you know, maybe avoid all that lame ground stuff, huh?

Despite the potential shady business, the Shaw family didn't have to worry about their prize pig getting taken down. The fight didn't last long enough for a grappling battle, as the late replacement knocked Kimbo out with a glancing jab just 14 seconds into the fight. Gus Johnson went nuts, Jared Shaw screamed at the refs, and in the end Seth Petruzelli earned almost $3,600 per second he spent fighting that night.

The loss, coupled with Petruzelli's claims of tampering from executives in the following days, were Elite XC's death knell. The negative publicity, along with the mounting debt from buying fighter contracts and regional promotions in a completely unsustainable manner, drove the company out of the fight game. Elite XC ceased operations in late October 2008. Many of their contracts were snapped up by Strikeforce and several of their fighters are still successful today.

In the end, a company risked their entire operation on a man who called himself Kimbo. Somehow, that failed. Elite XC is now the answer to a trivia question and the precursor to Strikeforce's CBS appearances - the latest of which ended with an unplanned, post-fight brawl that may have ended the sport's run on national television for years to come. It took the company two years to hemorrhage over $55 million in losses, and the best they have to show for it is a handful of entertaining fights, a Nick Diaz catchphrase ("Don't be scared, homie!") and some almost delusional screaming commentary from Gus Johnson.

Still, we salute you, Elite XC, for having marketable talent and elite talent, but not anyone who could be considered both. The Shaw family found an emerging, already-saturated market and tried to wring money out of it by virtue of growing faster than anyone else and with the least amount of planning. They gave a huge "fuck you" to their legitimate athletes by pushing fights that had no business in the upper tier of MMA. The fighters that didn't belong in the spotlight delivered a prompt "fuck you" in return and sunk the company.

Vanderbilt football might be bad, but it's not that bad. Here's to you, Elite XC, for making us feel better by comparison.