The American soft drink market is a complicated beast. Behind the two major brands (Coke and Pepsi) lies a jungle of varying tastes and terrible decisions. Since the inception of the country's major sodas, beverage companies have scrapped to create the next Mountain Dew, testing various combinations of ungodly chemical flavors in order to find the right taste and win the hearts of future diabetics everywhere.

Sometimes this results in sublime prosperity. Anyone who has had Baja Blast at their local Taco Bell will tell you that Pepsi Co. has created a drink that allows you to reach out and touch the hand of god. Other variants, like Vanilla Coke, Cranberry Sierra Mist (at Thanksgiving), and Cherry Vanilla Dr. Pepper are moderately successful. However, they're the exception to the rule. Similar to Vanderbilt football, failure is the norm when it comes to major overhauls or new products in the soft drink market.

Like Woody Widenhofer's tenure, sometimes these failures are epic. Coke's sugary-sweet revamp in 1985 led to more pipe bombs being sent to their headquarters in Atlanta than a Kansas abortion clinic. Crystal Pepsi has been credited for bringing a nation together in solidarity after Operation Desert Storm just to talk about how shitty it was. Josta contained 19 different types of fatal poison, including cobra venom.

Despite some high-profile mistakes, soda companies haven't been deterred from finding new and aggressive ways to lose money and alienate the public. Today, we'll take a look at a few notables in the world of terrible soft drinks. 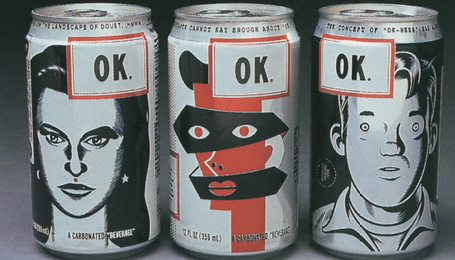 All the grittiness and non-conformity of a Coke product, with a vaguely Soviet touch. via readplatform.com

OK Soda - along with Crystal Pepsi, this is the Cadillac of failed sodas. OK Soda was aggressively marketed by Coca-Cola as the world's first alt-soda. It has been credited with launching the careers of Suicide Girls everywhere with its uncaring, off-the-grid, slightly non-conformist-in-a-conformist-way attitude towards sugary colas. I was fortunate to grow up in one of the test areas for the drink (Providence, RI), and even as a nine-year-old I felt the budding excitement of finally having an avant-garde cola to call my own.

OK Soda was more of a way of life than a soda. It had its own phone number (1-800-I-FEEL-OK). It had its own manifesto (ex. "#5 OK Soda reveals the surprising truth about people and situations). This soda was so far up its own ass that it didn't give a fuck what you thought. As a result, the Coca-Cola people didn't mind that OK Soda tasted like a stale mix of whatever leftover syrup they happened to have floating around the warehouse on a given day.

The brand was marketed to disillusioned Gen-Xers through an ad campaign that basically said "This is soda. I don't care if you drink it." Few did, and it only lasted on the market for two years, never making it past the test stage. 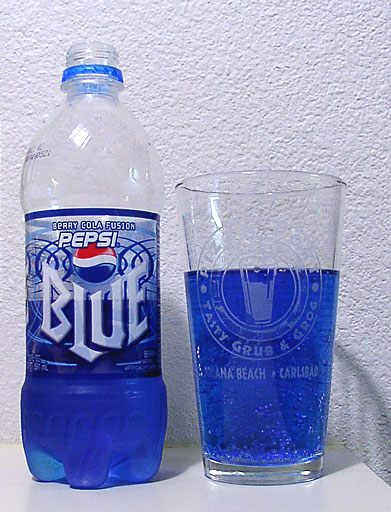 What's that? This Pepsi is different than normal Pepsi? How can you be sure? via www.jumboheroes.com

Pepsi Blue - Pepsi Blue came out my freshman year of college, and instantly made its mark as a complete waste of mealplan dollars. Pepsi hopped aboard the vague flavor train of blue raspberry to roll out a new kind of soda based on the idea that Americans craved undistinguishable chemicals. However, unlike the vast ocean of nitrates that populate our hot dogs, Pepsi forgot to make their product actually taste good.

The company ran with the color premise after Mountain Dew's Code Red was a surprising success years earlier. The natural progression here was to go blue, but few natural flavors to accompany that. In response, Pepsi co-opted a technology that only Jolly Ranchers and Blow Pops had mastered before - the rare blue raspberry. The end result was a soda with all the authentic flavoring of Bud Light Lime. Seemingly understanding the shittiness of their own product, Pepsi recruited Papa Roach to endorse the cola, which tasted like melted popsicles. Failure appeared to be immiment.

Fortunately for Pepsi Blue, this was 2002 - basically the wild west for soda brands - so the expansion went on as planned, hitting markets across the country and sitting impotently on shelves throughout America. The biggest accomplishment the drink ever garnered was making 7-11s everywhere a bit more colorful.

To its credit, Pepsi Blue is still kicking around, available exclusively in convenience stores across Kuala Lumpur. I am so sorry, Kuala Lumpur. I don't know what you did to deserve that.

Fun fact: Everything, from the label to the soda itself, was dyed blue just in case you didn't understand that what you weren't drinking wasn't regular Pepsi. Either that company thinks we're idiots, or they really hate subtlety. Also, that dye they used? At the time, it was banned in several other countries citing health concerns. Thanks, Pepsi! 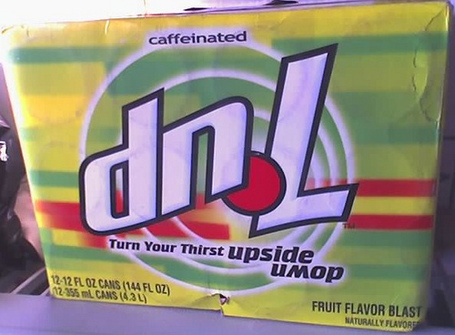 I see what you did there. via farm4.static.flickr.com
7-up dn-L - As I previously mentioned, 2002 was a high water mark for terrible soda variations. Dr. Pepper, Pepsi, and Coke all came out with weird remixes of popular sodas, and 7-up threw their hat in the ring with dn-L, the company's attempt to be witty by introducing a drink to the market that no one liked. Also, its name was 7-up upside down, or something.

The basis of the product was that dn-L was everything 7-up wasn't; caffeinated, dyed, and unpopular. Wikipedia also points out that it had a "lime-lemon" flavor rather than the original's "lemon-lime" flavor, which really just seems like a middle finger to consumers. Also, I remember this stuff having a slightly melon-y taste to it, but that can't be true, since a honeydew flavored soda would be awesome and cantaloupe Gatorade was the greatest flavor ever.

dn-L lasted only 3 years and was eventually run out of the market by Mountain Dew, which apparently other soda companies regard as the Fredo of all soft drinks. Look at all the competitors that hit the market going after Mountain Dew: Citra, Mello Yello, Vault, Squirt, Sun Drop, Surge, dn-L, and Kick. All have tried to wrest control of the citrus/caffeine market from the Dew's icy grip. None have succeeded.

Fun fact: dn-L catered to its alcoholic readers by designing a can that could still be read legibly whilst passed out. This was its primary benefit to the world of soft drinks. 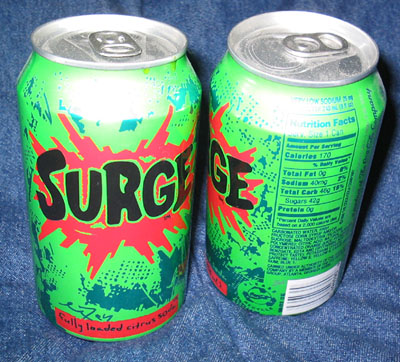 They literally just added a "S" to the can to avoid any sexual connotation. via media.tumblr.com

Surge - Nerds will defend Surge as strongly as they defend Battlestar Galactica. Coke's Mountain Dew competitor blossomed from a Norwegian beverage called Urge and fought through international test markets to arrive in America in 1996. It instantly became the beverage of choice for mouth-breathers everywhere for reasons I don't fully understand. It's possible that the bottling made Surge easier to fit in a cloak. Maybe the drink improved your juggling skills. Did the drink include a chemical mix that shut off the part of your brain that makes you want to talk to girls? We'll never know for sure.

Surge tasted like any stock citrus soda and had a relatively successful run, lasting seven years on the international market. Unfortunately, sales faltered when Coca-Cola failed to pair the game in marketing promotions with Magic: The Gathering or Final Fantasy games, and it was eventually pulled from shelves due to lackluster sales amongst demographics that didn't list their religion as "Jedi."

In the end, the Dew reclaimed its spot atop the throne of the nerd kingdom, and Surge faded slowly back to Norway, where it's devolved into an energy drink called Urge Intense. That...sounds...awesome.

Fun fact: 84 percent of people who own both Firefly and Serenity on DVD have a bottle of Surge delicately placed on a mantle somewhere for posterity's sake. 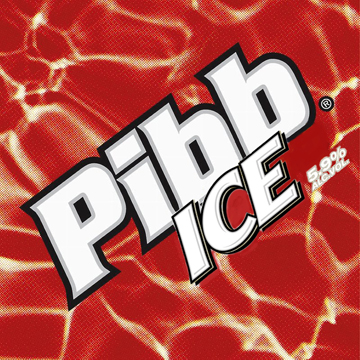 Pibb Ice: Because the old Mr. Pibb didn't get you sloppy.

Pibb Ice - After Sparks but before Four Loko, there was Pibb Ice. Mr. Pibb's foray into the world of malt based beverages was one of the biggest failures in Coca-Cola history.

In 2006, Coke decided to relaunch Mr. Pibb as an edgier soda in response to Dr. Pepper's dominance of the cherry/caffeine market, creating three new brands based on their beverage. Mr. Pibb had been a modest success since its inception in 1972, but the company needed a marquee product to resuscitate their dying brand. Pibb Xtra and Pibb Zero were just extreme enough to compete with Dr. Pepper's wholesome image, but the company took things a step further with Pibb Ice.

Coke paired with Anheuser-Busch to bring us the world's first soda/malt liquor hybrid, excepting all those Diet Slice/Olde English combinations you used to make back in college. The end result was a caffeinated, high-gravity slop that tasted like someone dropped Splenda into a can of Red Dog - which is to say, not bad.

Of course, there were tons of problems that came with the product. The label was so similar to regular Mr. Pibb products that many people failed to understand its alcoholic content. In fact, the beverage's 16 ounce tall-boy can was often the only way to tell it apart from newly released Pibb Xtra. Complaints of young kids unknowingly buying the product - and ignorant shopkeepers selling it to them - flooded the test markets. The drink's caffeine/alcohol content also raised suspicions.

In the end, Coca-Cola decided that Pibb Ice, no matter how awesome or extreme it truly was, wasn't worth the hassle. The drink was discontinued after a few test runs and Coke went back to its standard, non-alcoholic slate of products. Pibb Xtra and Pibb Zero are still out there, and if you mix Xtra with half a can of Busch Light and top it with rum, you can almost recreate the taste.