Schadenfreude Fridays: The King Can Taste Test (Part I?)

Share All sharing options for: Schadenfreude Fridays: The King Can Taste Test (Part I?)

Today, we're putting the burden of shame on ourselves at Anchor of Gold. In honor of Vanderbilt's upcoming Spring Game and the tailgating that goes with it, contributor gumbercules and I took it on ourselves to run through some of your pre-game beer options for this Sunday's showdown between Black and Gold. And to commemorate Coach James Franklin's first major event at Vanderbilt Stadium, we decided to go big with it.

This week's feature will run through four of the biggest, cheapest, most impressive-looking king cans we could find at our local Woodman's up here in Wisconsin. For less than $7, we were able to pick up 96 ounces of malt liquor, high gravity lager, and something called a "stack" that all came in at 10% alcohol or higher. For one evening, we were kings amongst hobos, with enough alcohol content in four cans to make up the bulk of 20 regular beers. Of course, with great liquor comes great responsibility, so we recorded our thoughts so that we could pass them on to the Vanderbilt faithful.

These reviews go in chronological order according to how the day progressed, so don't be shocked if they make less sense as the article wears on. 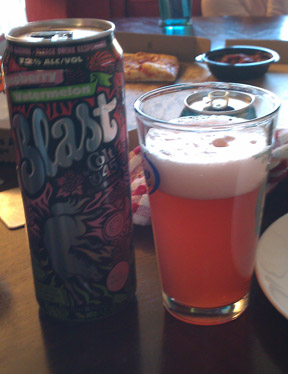 Train Island - This is the dreamy intersection of fruit and grain alcohol that Bartles and Jaymes once envisioned.

gumbercules – I can’t taste the alcohol, but my body immediately knows that something’s wrong

TI – It must be the feeling that death row inmates get when they wake up on their final day.

g – This is already giving me terrible gas. I’ve had about four sips.

g – I think you know its working when you punch your girlfriend. It is a Colt 45 product after all.

TI - This can imagery is impressive. Apparently this drink will take you to a land where wild horses kick fruits into pure alcohol.

g - That horse is probably pissed that it's only drinking supply has been tainted by vodka watermelons. 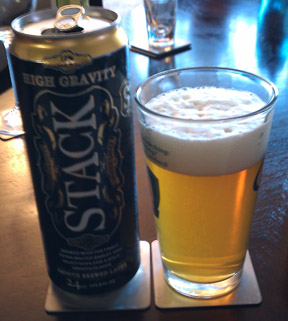 Train Island – Oh no. Are those apples?
gumbercules – There’s definitely a fruity undercurrent that belongs nowhere near anything that should have ever been drank.
TI – It worries me that this doesn’t have a smell. This beer is so generically awful that it’s only value is in its alcohol content
g - …
TI – Fair enough.
g – Stop mining me for content. I just want to drink this alone.
TI - …
g – It tastes like someone dropped a shot of vodka into a year-old Pabst.
TI – That’s good.
g – That’s bad.
TI – Oh.

g - This is probably too much gravity for any one drink to have.
TI - It's the Jupiter of malt liquors.
g - I get that joke, but no one else will.
TI - This is a Vanderbilt blog, have faith.

TI – Why is the word stack included with this abomination? Is it supposed to be a steroid reference?

g – Probably. I’d say this thing is a 50/50 split between HGH and just pure testosterone.

TI – This is what they give underdeveloped children in Russia.

g – This is what created Ivan Drago.

TI – The Soviet machine created Ivan Drago. This is more like whatever super chemical they used in the Batman comics to create Bane.

g – So this makes you want to kill the Dark Knight?

TI – It makes me want to kill *something*. 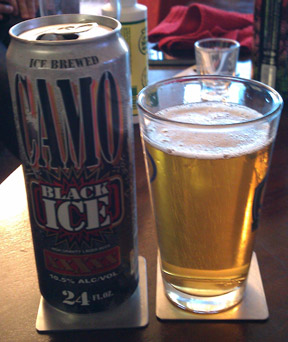 TI – The cheapest of the bunch. The can has all the subtlety of a local MMA promotion poster.

g – This can is deciding whether it wants to fight or fuck you.

TI – This can cycled on and off three different stacks so it could be named regional King of the Cage.

g – This can is equally adept at bro-hugs and guillotine chokes.

g – This can – wait, is that an Achewood reference?

TI – Yeah, but I cleaned it up for the kids out there.

TI - It’s lighter and beer-ier than that last beer.
Katie (third party observer, not sitting close by any means) – It smells like asparagus pee. I assume that’s what it tastes like too.
g – Are you suggesting that there are people out there whose kidneys work so poorly that they pee out 10.5% alcohol content malt liquor?
TI – My liver operates only in high gravity format.
g – That’s not a thing.
TI – I think this is better than the Stack.
(Everyone in the room) – No.

Consensus: Man, why you even got to do a thing? 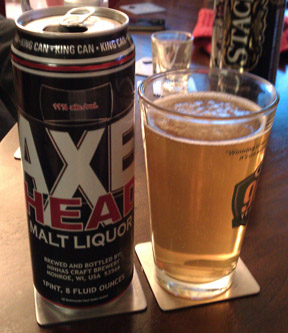 TI - Look at this can. This is a working man's malt liquor.
g - It's what Paul Bunyan would drink.
TI - The King Can was just a natural progression. 24 ounces is the smallest possible size they could think of.
g - Who would want less than four cups of kidney poison?
TI - It's cheaper than Aquafina.
g – It smells like deodorant. Only it’s terrible. So just odorant.
TI – Is that a thing?
g – Now it is. Spellcheck seems to agree.
TI – Spellcheck is an idiot, it doesn’t even think its name is a word.
K – There’s a direct black bean undercurrent.
g – Fitting, because generally when I want to eat burritos, it’s a product of being drunk.
TI – Mission accomplished.
g – But it is like a Mexican restaurant rented out my mouth.
TI – Which would be cheap.
g – Yeah, my mouth isn’t a great location.

(Intermission, followed by 45 minutes of Road Rash on the Sega Genesis)

TI – Maybe it’s just that this is the last beer in the group, but I don’t hate it.

So, if you were keeping track at home, the Colt 45 was tolerable, while everything else was basically just a veiled excuse to drink poison. You may be wondering why we decided to skip Four Loko, and the answer is simple - that stuff is the Nickelback of king cans. Everyone knows what it is, and everyone already knows that it sucks. Also, I'd be a dick if I didn't mention that this article was heavily influenced by the Black Table's Beer Runs of years passed.

Hopefully this will be the first in a series of taste tests, though gumbercules has frequently stated his hatred for this article, so maybe not. Feel free to add suggestions for the next round in the comments below, and we'll do our best to report back on how terrible it is. Until then, feel free to impress friends, neighbors, and hobos in boxcars everywhere with your newfound knowledge of the high gravity scene. Just don't hold us accountable when your kidneys straight up and leave after processing the equivalent of battery acid for a week straight.