Schadenfreude Fridays: Jar of Hearts is the Worst Song in the World

Share All sharing options for: Schadenfreude Fridays: Jar of Hearts is the Worst Song in the World 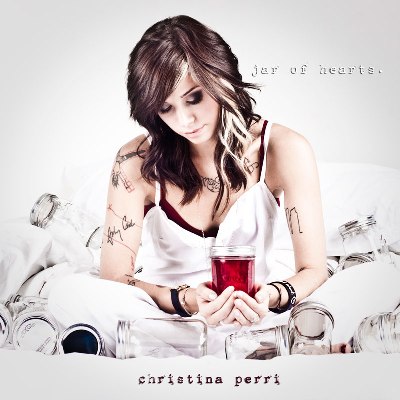 Are you guys getting the subtlety here? It's hard to spot.

Rebecca Black has been getting a lot of heat lately, and much of it is deserved; "Friday" is either a terrible song or an Andy Kaufman-esque work of genius. However, there's one song out there that deserves your scorn much, much more. A song that has flooded radio stations and reached out to the hearts of depressed teenagers reeling from breakups across America. A song that mixes metaphors interchangeably and addresses them with such literal force that you'd swear the writers have absolutely no understanding of hyperbole, structure, or possibly even the concept of fiction.  A song named Jar of Hearts.

There's no way you haven't heard this song if you live in America. My terrible gym plays it at least once an hour, presumably in an attempt to ignite rage in their spin classes. It's also on the radio nearly non-stop, which proves that teenaged girls have more control over the media than can be good for anyone.

It may be popular, but make no mistake; this song is toxic. If you play it near a Robin's nest, the mother bird will abandon her eggs. I played the YouTube video while watching Mad Men clips and it made Jon Hamm shit his pants. It makes the Cupid Shuffle look like Greensleeves by comparison. And the Cupid Shuffle is a song so bad that it tries to teach white people how to dance.


People in Indiana *love* this song. It's a phenomenon that defies explanation.

Yet, despite this toxicity, this song just keeps getting more popular. Its Wikipedia page has a whole section noting critical praise, and somehow none of it seems ironic. "Jar of Hearts" is already a Billboard Top 20 song and just won't go away.

So is it just me? Am I the only one that thinks this song is terrible? Has my hate stemming from the end of basketball season blinded me to poor Ms. Perri's plight? Am I just a heartless bastard with no taste in music?

To figure this out, I decided to pour over the song lyric by lyric to see if I'm wrong.

I know I can't take one more step towards you
Cause all that's waiting is regret
And don't you know I'm not your ghost anymore?
You lost the love
I loved the most

Confused by all these cryptic metaphors? Don't worry, we're about to get really literal really fucking quickly.

And I learned to live, half-alive
And now you want me one more time

This is actually a solid explanation behind the song, as Perri explains promptly that she's equally dead as alive* and therefore either a zombie or Frankenstein type creation. Ostensibly, she scribbled all this down before being chased into the woods by a mob of angry villagers, which would explain both the angry/depressed tone of the song and the fact that its lyrics have all the tact and imagination of a thirteen-year-old's poetry.

*Only Miracle Max could save her now!

Who do you think you are?
Runnin' round leaving scars
Collecting your jar of hearts
And tearing love apart

Ho ho ho ho ho ho-ly shit. Did anyone else just get a spontaneous nosebleed from reading that? "Jar of hearts?" "Tearing love apart?" Fuck you, Christina Perri.

Aside from confusion and eventual anger, my first reaction to this song was a distant memory. When I broke up with my girlfriend from high school after going to college, she quoted lyrics from Evanescence's "My Immortal" in AIM messages to convey how she felt. She did this for several months.

I always thought that was a terrible way to react to a breakup until "Jar of Hearts" came along. Now I'm reconsidering. Maybe her reaction was completely reasonable faced with the grim truth of other insane ramblings she could have posted, or better yet, dumped into a shitty song. Maybe Ms. Perri's true contribution to America is to make all our horrible relationships seem a bit more stable, and make our crazy ex-girlfriends (and boyfriends) seem a little bit saner.

That's where this song belongs. In the AIM away message of a dumped teenage girl. Congratulations, Christina Perri, you've developed the juggernaut America needed to out-depress "My Immortal." It only took seven and a half years.

You're gonna catch a cold
From the ice inside your soul
So don't come back for me
Who do you think you are?

Ms. Perri doesn't fully grasp the workings of the human immune system. Exposure to cold will not cause her ex-boyfriend to get sick, regardless of the amount of frozen water floating behind his dead eyes. If she really wants him to suffer, she should expose him to other souls who have the flu. Otherwise, she's just perpetuating an old wives' tale. That's misinformation, cuz.

1. Que the sad violins, because the sad piano just didn't sell it.

2. Nobody talks like that. Even 19th Century cockney grifters would take issue with this sentence structure. I also can't think of a creepier way to describe the act of one person looking for another. If someone comes looking for someone and asks me "if he/she is anywhere to be found," I would know immediately that the person in question is probably going to be raped later.

3. This is also as good a time as any to point out that Perri's sad voice has a monotonish-but-sing-songy quality to it, almost as if she should be singing the world's most melancholy rendition of "Baa Baa Black Sheep" rather than bleating out this musical travesty.

At this point, the chorus hits again and bleeds into the song's bridge. Bleeds is absolutely the right word to use here.

Dear, it took so long just to feel alright
Remember how to put back the light in my eyes

Holy shit. What a convoluted, roundabout, indirect, shitty way to say that you have a few regrets. This has all the tact of eighth grade poetry. How the fuck does this girl even form a sentence in real life? I imagine ordering at Olive Garden turns into 500 word soliloquy on Christina Perri's long turbulent history with breadsticks. I do appreciate the commitment to the A-A-B-A-B-A rhyme scheme though. I imagine the bridge would have gone on longer if the couple had shared memories where they fished, watched Frank Darabont's The Mist, slit each others wrists, or drank Schlitz.

Of course, just directly making a statement would totally destroy this abortion of lyrical structure, so I guess we'll stick with the devil we know. In this case, the devil has Asperger's and is probably dyslexic.

And now you're back
You don't get to get me back

"By the way, guys: rhyming 'Homer' with 'homer'? (kisses fingers) 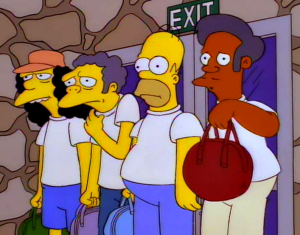 And then we hit the chorus again - which, at this point, whatever. Perri bleats out three final "Who do you think you are?" lines as the music fades behind her, just so we fully understand that she isn't pleased with the direction her relationship has taken. It might be the only redeeming part of the song, partially because it actually sounds good/creepy enough to get tacked onto a trailer for the new Dead Space game, and partially because this four-minute train wreck is finally coming to an end.

So, in case you weren't sure of my tone, I'm still fairly certain that this song is what caused the disaster in Japan. Its inception was the product of the war in Libya and Princess Di's fatal car crash, a perfect storm of melancholy that created the opportunity for a song that doesn't really understand the concept of metaphors to use them every other lyric. More proof of that is in the video, which contains ACTUAL JARS OF HEARTS.

Vanderbilt fans, take solace. We may have watched our basketball team go down in flames for the fourth straight year, but at least the majority of us can put together basic sentences without falling into the worst hyperbole in the history of the universe. Jar of Hearts is a terrible, terrible song that is making a decent singer a boatload of money, and maybe that should make us sad. However, the mere fact that none of us ever came up with the conceit of a jar filled with hearts, a soul filled with ice that causes flu-like symptoms, or the sequence "tearing love apart" makes us the true winners.

Jar of Hearts: worse than losing to Richmond.