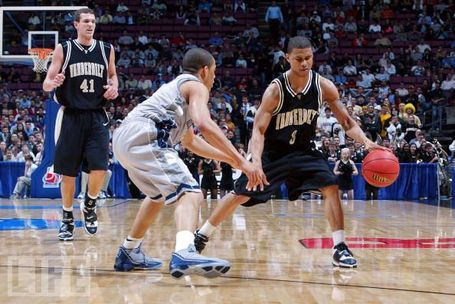 If you've been any paying attention, you already know the media's preordained description of Vanderbilt's postseason acumen. "Oh, those Commodores! They've never gotten it done in March!" Read the stories and listen to the talking heads. You'd think someone could invent the Music City Postseason Invitational Round-Robin, then watch in awe as the Dores go 0-3 against Fisk, Trevecca, and Free Will Baptist.

But if you've followed VU basketball for at least a few years (or the football team for, say, any series of 5 offensive plays), you're sick of it. You know better. You want to wave your fat little fingers in the air and yell "I say thee, nay!" And that's why I'm here -- to wield the Mjöllnir of YouTube, and disabuse the notion Vanderbilt has been predestined to fall apart since James Naismith tacked up two peach baskets in 1891. That, and to type in run-on sentences.

Before the Sienas or the Murray States, there was glory. Sweet, sweet clutchtastic glory. Join me in a trip down memory lane, looking at some of Vanderbilt's postseason stands. I've elected to present them in increasing order of ridiculousness.

But first, let's note Richmond isn't the first A-10 team with a double-digit seed Vandy's faced. The 2007 first round opponent was #11 seed GW, and the Colonials were immediately pegged as a first round Cinderella. So what happened? The Commodores hammered George Washington like a horde of angry mead-fueled Hessians, holding leads of 13-2, 27-9, and 50-20, cruising to a 33-point win.

VU's reward was #3 seed and Final Four dark horse Washington State. Derrick Byars played out of his mind, hitting five long bombs and scoring 27. Most importantly, he came up with a huge block with two seconds left to send the game to the second OT. Shan Foster added 20 points, but by this point it was clear Vandy needed someone else to step up. A man. A hero. A tall gonky white dude.

Ted Skuchas scored Vandy's first four points of the second overtime, then followed it with a hilariously awkward save of the final inbound pass to Alex Gordon, who fed Shan for the game-sealing layup.

Video footage is from 1:25 to 3:00, and have a quick trigger finger to turn it off after that.

Hear me out. Seriously, don't tell me this wasn't a clutch performance in the final 90 seconds. They hit their final 5 free throws, played tight defense, and forced Jeff Green to travel twice.

This should have been Kevin Stallings' finest moment. No, scratch that, it was. The only thing Vandy didn't do was remember NCAA Bylaw 183, Section 4c: "A Big East team shall be allowed to do whatever it feels like doing in the final 3 seconds of a game." Tragically, even the Big East's own Rutgers forgot the same rule against St. John's earlier this month.

No video because it still hurts, so here's footage of an even more obvious travel costing some other team instead. Chicago State steals one from UMKC in 2005, although it's hard to feel too bad for a team who has baselines written in Comic Sans.

And thank you to the team for the Elite 8-level performance that night.

VU got here by defeating 11th-seeded Western Michigan, yet another popular pick for a first-round upset. Notice a pattern?

Stallings claimed in the post-game press conference that Matt Freije had so much nervous energy, he ran around the arena forty times the morning of the game. The Wolfpack led by 11 with 3:45 to play, when the defense clamped down and refused to allow another field goal for the rest of the game. Corey Smith drew an intentional foul that set up a 5-point possession -- and yes Len Elmore, you ACC apologist, you have to make some sort of play for the ball. With 21 seconds left, Smith took a perfect feed from Mario Moore on a backdoor cut to give Vandy the lead for good, capping off the high point of the quasi-Princeton offense era.

(Why do we not see more of those plays now? Tinsley is an equally good, if not better passer than Moore, and Taylor is more athletic than Smith. I digress.)

The video picks up at 2:44, with ACC Player of the Year Julius Hodge fouling out.

I don't know what anyone could add to this. Corey Smith gets behind 2 Wichita State defenders, catches a perfect inbound full-court lob, and lays it in, all with 0.7 seconds remaining. There wasn't as much on the line here -- it was the NIT, and the worst-case scenario was overtime -- but you'd never know it from the players' reactions. I love that.

Better times were ahead for the Shockers, as they'd defeat Tennessee (yay) to reach the Sweet 16 the next year.

Vanderbilt wasn't exactly cannon fodder, with wins over Kentucky, Notre Dame, and then-#1 North Carolina, plus a two-point loss at Indiana. But the Panthers were 24-6, #8 in the country, and Big East champions. Unfortunately for Pitt, no one remembered to clue Barry Goheen into that, or the fact he was in Nebraska, not Nashville.

Goheen scored six points in the final eight seconds, sending the game into overtime, where...I have no idea. At the end of regulation, either CBS itself, the Nashville affiliate, or our local cable company went black for about five minutes. All I know is when the video feed returned, even with All-American center Will Perdue fouled out on the bench, Vandy was ahead by six and never looked back.

Thanks to the blackout, this game is forever known in my house as the I Hate You, CBS Game. And if nursing a grudge from childhood over this isn't the most ridiculous thing of all, I can't imagine what is.

So there you have it. The last two tournaments? Aberrations. Now go out there Thursday and sink Richmond.