The Commodore Review: How Vanderbilt Really Looked Against #8 Arkansas

Share All sharing options for: The Commodore Review: How Vanderbilt Really Looked Against #8 Arkansas

By the time I caught the replay of Saturday's game against Arkansas, I already knew how it turned out. Sadly, it didn't make things less painful to watch.

The way this team played against the Razorbacks wasn't the "same old Vandy," but the outcome sure as hell was. An inspired offensive game gave way to one-time mistakes and some of the worst luck the SEC has ever seen. The loss overshadowed great performances by Jordan Rodgers, Jordan Matthews, and Tim Fugger in the worst possible way.

Zac Stacy, this team's MVP, picked the worst possible time to lose his first fumble of the season, ceding a 95 yard recovery that ended up tying the game at 28-28 rather than giving the 'Dores a 35-20 lead in the fourth quarter. Casey Hayward, one of the NCAA's best when it comes to pulling down passes that aren't intended for him, dropped no fewer than three potential interceptions, any of which would have helped Vandy blow this game open. Carey Spear, after making a clutch game-winning kick to beat Connecticut early in the season, booted a 27-yard attempt so far right that it never had a chance to send this game into overtime.

Three clutch players - three players without whom this team would be much worse than 4-4 today - all made mistakes. Three guys who have sealed wins and swung momentum for James Franklin's team all had the most miserable fourth quarters of their lives Saturday afternoon. That's an aberration. A terrible, awful, very-no-good aberration. And the good news for Vandy fans is, it's not going to happen again.

Now, the heart of this team is fired up and playing with a chip on their shoulders. Vanderbilt not only stood up to the eighth ranked team in the country behind a quarterback making his second-ever NCAA start, they outgained them by nearly 80 yards on the day. Rodgers proved that he can be an efficient passer against one of the SEC's elite teams. The defense proved that they can get stops when the need them most - allowing only field goals in the final half of play.

Yes, that was a painful loss. The only way it could have been worse is if it had come against Tennessee (if that had happened, our game recap would have only been a video of Adam Goldberg's character slowly getting stabbed to death in Saving Private Ryan). However, the game proved to fans, recruits, and the national media that this team is for real. James Franklin has to have these kids believing now that they can beat anyone in the country. After Saturday's performance, I'm starting to think it's possible as well.

Good/bad analysis and the PiBB ICE Player of the Week are after the jump...

The PiBB ICE Player of the Week Award: Jordan Rodgers 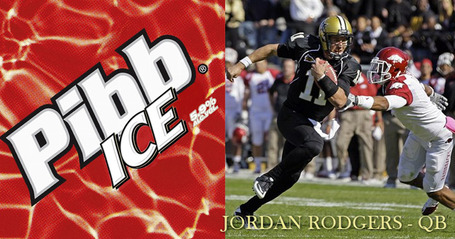 Rodgers earned the throne at quarterback this season, playing his way into the starting position through a combination of hard work and opportunity. His 306 yards of total offense against Arkansas represent what was potentially the best showing for a Vanderbilt signal-caller since Chris Nickson's sophomore season. His performance not only sent a message to the rest of the SEC, but to a pair of guys sitting on the Vanderbilt sideline for redshirt years. Austyn Carta-Samuels and Josh Grady, might just have to wait an extra year to battle it out for the starting QB slot.