The Commodore Review: How Vanderbilt Really Looked Against Army

Share All sharing options for: The Commodore Review: How Vanderbilt Really Looked Against Army

Jordan Rodgers was far from perfect in his first NCAA start, but he played well enough to lead Vanderbilt to a dominant 44-21 win over Army Saturday night.

Rodgers completed just 10 of his 27 pass attempts, but his 186 yards were the most the Commodores have gained through the air all season. He continued to spark the team with his mobility, rushing for 96 yards and a touchdown on a combination of designed draws and quarterback scrambles. Whether or not he can be effective against a high caliber defense that has had ample time to prepare for Rodgers's skillset has yet to be seen, but his proficiency Saturday should earn him the start next week against Arkansas.

The Commodores pulled away in the second quarter and rode out the win with a run-dominated second half. Though the Black Knights made things interesting with a 15-0 spurt early in the fourth quarter, Vanderbilt was able to respond with a Zac Stacy touchdown run to shut the door on an Army comeback. In a game that could have huge implications in this team's bowl eligibility, Vandy took care of business while getting some of the improvements that could lead to a big upset win in November.

Rodgers's ascent may signal a changing of the guard at wide receiver. Jordan Matthews and Jonathan Krause were both primed for breakout years after strong freshman campaigns. However, it was a pair of players in the midst of the first years at wideout who led this team's passing attack. Chris Boyd and Wesley Tate were Rodgers's primary options through the air, combining for seven of the team's 10 receptions and 128 receiving yards. Both players give the Commodores a big target that can stretch the field as well as handle passes between the hashmarks.

Defensively, the team looked solid in stopping Army's vaunted triple-option running attack. Chris Marve responded to the Black Knights' offensive pressure by recording 11 tackles, one sack, and a forced fumble. The defensive line, playing without an injured Tim Fugger, held strong against the rush as well, limiting Army to over 90 yards fewer than their season average.

Good/Bad analysis and the PiBB ICE Player of the Week Award are after the jump...

The PiBB ICE Player of the Week: Zac Stacy 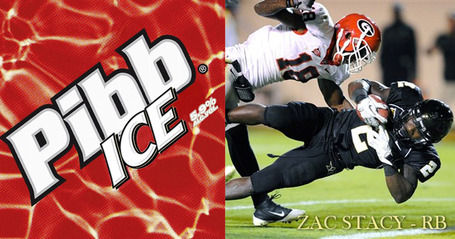 Stacy takes home his third PIPOTW award with a career-best day on the ground. He ran for 198 yards and three touchdowns, all personal bests, in the win. In his three award-winning performances, Stacy has run for 464 yards and five touchdowns while throwing for another. He's stood out as this team's most valuable player through the first seven games of the season and has a legitimate shot at setting the Vanderbilt single-season rushing record (1,103 yards, set by Corey Harris in 1991). If he can top the 1,000 yard plateau, he'd be only the fourth tailback in history to reach that milestone.