The Commodore Review: How Vanderbilt Really Looked Against #2 Alabama

Share All sharing options for: The Commodore Review: How Vanderbilt Really Looked Against #2 Alabama

Alabama stomped the Commodores Saturday night, but Vandy played better than the night's 34-0 score suggests. Or, at the very least, better than their last game against South Carolina.

Some thought that Vanderbilt was due for an epically bad offensive showing versus the Tide's swarming defense, but the team's 194 yard output was nearly three times more than the team generated against the Gamecocks two weeks ago. The team's offensive line allowed zero sacks on the day and Jordan Rodgers showed glimpses of genuine talent throughout the team's stunted drives. While none of these developments helped the team put any points on the board, it helped shake off some of the bad feelings from a 77 total yard performance in the team's last outing.

Let's not sugar coat the loss too dramatically - Saturday night's showing was BAD. The team converted just one of their 10 third down opportunities and averaged only 2.2 yards per carry. The rush game, the catalyst for this team's offense, got nine total yards from their tailbacks. Vandy's all-world defense looked merely average against a very good Alabama team as well. As 29 point underdogs, the team couldn't even cover the spread - although a pair of missed field goals from Carey Spear contributed to the shutout.

The loss was a mixed bag for the team's offensive line. While they were strong in keeping Rodgers and Larry Smith from absorbing sacks, they were unable to open running lanes for Zac Stacy and Jerron Seymour to run through. Alabama's defensive line was almost unmovable in the trenches, causing James Franklin and his staff to abandon a traditional running attach early in the game.

This led to an emphasis on the mid-level passing game, which was a mixed bag of results for the 'Dores. Larry Smith left the game late in the first quarter after the team's most successful drive of the game. He went 4-4 for 45 yards to put the team in field goal position before Spear missed his first FG attempt of the game. Rodgers was decent in relief. He showed an accurate arm and quick instincts but also made some mental mistakes that led to a pair of interceptions and one vicious hit that had to have left the junior QB sore Sunday morning.

Good/Bad analysis, plus the PiBB ICE Player of the Week are after the jump...

The PiBB ICE Player of the Week: Wesley Tate 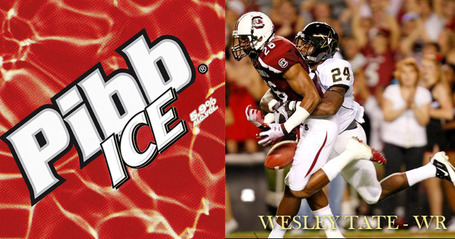 Tate, a reformed tailback, is making strides in his first season at wideout (sadly, this is the only image that SBNation has of him this year). The redshirt sophomore has improved in every game he's played so far in 2011 and been a welcome addition to the first string offense. His emergence has overshadowed the disappointing play of Jordan Matthews and added a physically imposing presence to the receiving corps. He led the team Saturday with three catches for 46 yards and appears to be building a strong rapport with quarterback Jordan Rodgers. 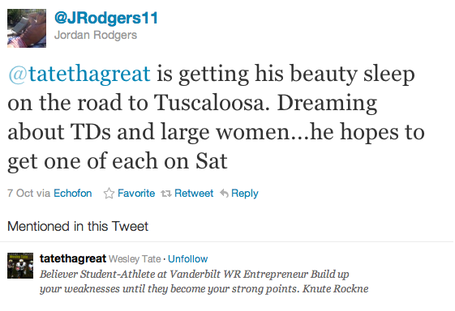