Share All sharing options for: Schadenfreude Fridays: The Ryugyong Hotel

The start of SEC media days unofficially kicked off college football season, traditionally three months of despair in the lives of Vanderbilt fans. 2010 will be another tough year; the best coach the school has seen in the modern era got so frustrated with the game that he quit the sport entirely. More depressing? The fact that the best coach Vandy has had in 40 years posted exactly one winning season (7-6 in 2008). And while new coach Robbie Caldwell has shown he's got the chops to handle the media, major questions continue to swirl about what he can do to this team on the field.

So, to help Commodores across the nation deal with the pain of fresh losses and the lingering memories of historic ones, we're instituting a new feature; Schadenfreude Fridays. The aim here is to comfort Vanderbilt's faithful by presenting train wrecks even worse than the past 35 years of Commodore football. Schadenfreude is pleasure taken from the suffering of others - and since this year's football season holds all the promise of a thousand awkward prom nights, the joy of watching others fail may be one of the few highlights of 2010. These don't necessarily have to be football related or even sports related - just something so spectacularly terrible that it makes Vandy fans a little bit happier to be cheering for their lovable group of three-star recruits with high GPAs and even higher 40 yard dash times.

In our continuing interest in the failures of others, let’s step outside the realm of sports, democracy, and common sense for a while. If you’ve lived in Pyongyang, North Korea in the past two decades (and it’s safe to assume that you probably haven’t, seeing as free press isn’t a priority there – and the estimated readership of this blog hovers around 2-3 people a month in Asia) you’ve no doubt felt a sinister presence casting a shadow down upon you. Beyond Kim Jong-Il’s militant grip, you’ve been forced to live with the presence of the world’s greatest architectural failure for nearly 20 years. 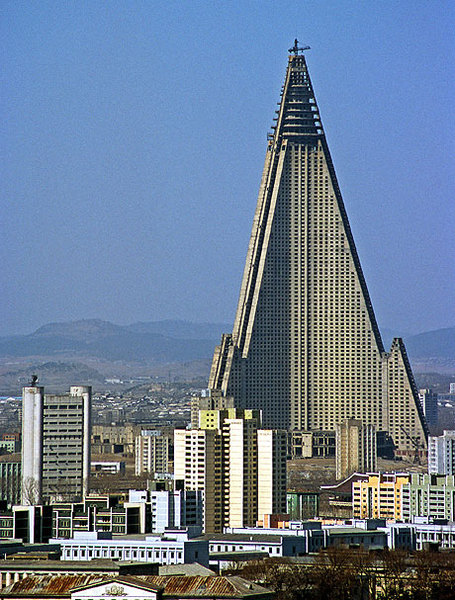 The Ryugyong Hotel: because the name "Mount Doom" was already trademarked. via www.esquire.com

The Ryugyong Hotel is an engineering marvel; not for its structure or design elements, but for the fact that it cost 2% of North Korea’s gross domestic product (GDP) and has remained uninhabited – and largely untouched – throughout the 90s and into the new millennium. Esquire has called it "The Worst Building in the History of Mankind." North Korea essentially denied its existence for over 15 years and airbrushed it out of official state photos. But it’s tough to ignore a 1,000 foot skyscraper, especially when it completely dominates your capital’s skyline. 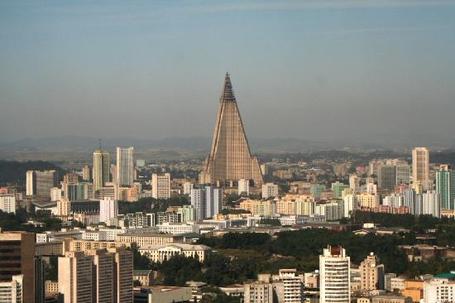 But, it blends in so...seamlessly...via media-cdn.tripadvisor.com

The building itself was designed as a kneejerk reaction to the South Korean designed Westin Stamford in Singapore, which had opened in 1986 as the world’s tallest hotel. In the midst of Cold War tensions, North Korea cleared the way for a building that stood almost 300 feet taller. It was immediately beset by flaws throughout the planning process that included major funding and construction issues. $750 million and several work stoppages later, the building sat empty and windowless for two decades, stretching out over Pyongyang like an abandoned tomb.

The exterior is dull concrete, ensuring that the building, even if finished, will be an eyesore. In 2008, an Egyptian company revived a 20 year hiatus of bad decision making to renovate the hotel, adding windows and cell phone towers to the structure despite the fact that North Korea forbids its citizens to carry cell phones. The new construction seems like a clear ploy to essentially monopolize cell phone business in the country, but that’s a pretty big gamble when you consider that the man you have to clear your business plan with - Kim Jong-Il - is insane. 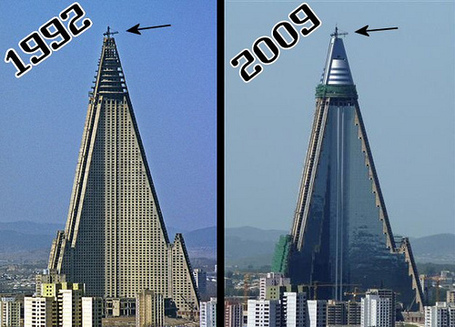 The hotel has seen some recent progression with the new construction - glass windows have been added to one side at last report, giving at least 1/3rd of the building a slightly less post-apocalyptic feel. Still, the building will carry on the vestige of 1980s excess despite possibly opening in the second decade of a new millenium - thereby ensuring that North Koreans will appear to be frozen in time even while enjoying the most grandiose construction that the country has ever undertaken.

The design of the building itself is a spatial nightmare. Assuming that land in Pyongyang – the national capital – is extremely valuable, the Ryugyong Hotel would have been a waste of space even if it were running at full capacity. Aside from dominating the city’s skyline, the building also makes little use of its three pronged pyramid shaped design, leaving plenty of wasted space across a large plot of land. Additionally, who would be the target audience to fill this hotel? Pyongyang is the heart of a military state with few tourists and an overwhelmingly poor rural population. While discos, restaurants, and casinos would bring in a few people, it is doubtful that they would have been able to sustain prolonged business for a hotel so large in a city of only two million without outside travel.

According to Korean officials, the building is slated for completion by 2012, only 23 years behind schedule. But at an estimated cost of up to $2 billion to be made fully inhabitable, it seems unlikely. And honestly, I don’t want to see it finished. Dress it up if you want, but let’s face it - when the apocalypse begins it will be headquartered at the Ryugyong Hotel. And a working hotel that happens to be the 3rd largest in the world? That’s interesting, I guess. But not nearly as interesting as the Worst Building in the History of the World.

So, Vandy fans, kick back and revel in the failure of others, and remember the Ryugyong Hotel the next time the 'Dores fail to show up against a service academy. Our team may be headed for another rough season, but at least we don't live in a country where 2% of our GDP was pumped into building a 1,100 foot ghost town.

Got an idea for Schedenfraude Fridays? Hate the idea? Think I write with the tact of a moderately intelligent chimp? Let us know in the comments.