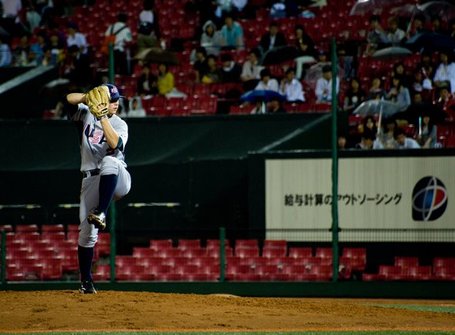 A lot of VU fans are advocating resting Sonny Gray for the second game, in the belief that Vanderbilt can cakewalk all over Illinois State just like we cakewalked all over Murray State.... err, I mean, in the belief that Taylor Hill is plenty good enough to beat Ill State. If I had to guess, I'd imagine Corbin will stick to the rotation because he usually does (with the exception of 2008, right?). But what should we do?

I don't know VU's personnel, let alone Louisville's and Illinois State's, enough to have an intelligent opinion, but I can tell how I'd answer this question.

The nasty details of my plan

1st simplifying assumption: The goal is to simply win the first two games. We want to maximize that probability p(win first two), which is virtually the same thing as maximizing p(win regional).

2nd simplifying assumption: Louisville will beat St. Louis. You can think about all the permutations if SLU wins, and it's baseball so 4-over-1 isn't rare at all. But for now, let's keep it simple.

Now repeat for Taylor Hill and ISU; for Gray and Louisville; and for Hill and Louisville. Multiply the relevant win probabilities: Hill-ISU times Gray-Lou for one final probability; Gray-ISU * Hill-Lou for the second probability. The higher number is the pitching tactic you should use.

Are these calculations practical to perform? No way! I don't even know if anyone keeps detailed, schedule-neutral stats on the qualities of pitchers or of starting lineups. There's probably someone who's related expected runs to win probabilities in MLB. (In other words: we expect 3.5 runs vs their pitching with a standard deviation of 1.0 run; they expect 2.8 runs against our pitching with an SD of 0.7 runs. What's the probability that we win?)

Conclusion: The value of this thought experiment.

Going to the trouble to write all this down does have a bit of a point, though. Human intuition tends to be really awful at multiplying probabilities. For example, most people's intuitive analysis of Bill Belichick's infamous fourth-down attempt versus Indianapolis is way too simple: if you go for it, you might miss it. If you go for it and miss, you leave the Colts offense at the NE 28, and Peyton Manning will surely beat you from there. Therefore it's clearly better to punt and make the Indpls. offense work to score on you, right?

Plain as day -- except that it's the wrong conclusion. For virtually any sane assumptions about the Colts' scoring probabilities Belichick made the right call. Intuition misses this subtlety, because intuition has trouble dealing with chains of probabilities -- the Pats lose if they miss the fourth-down conversion and Indpls. scores. Vanderbilt stays in the winner's bracket if they beat Ill. State and they beat Louisville.

Likewise, I'm pretty sure intuition overstates the value of saving Gray for Louisville. Intuition treats Gray versus Ill. State as a sure win, but it's not a sure win. Intuition treats Hill versus Louisville as a sure loss, but it's not a sure loss. What we really need, at the very least, is a theoretical framework for how best to assign differing amounts of pitching talent versus differing amounts of hitting talent.

If we had some idea of the shape of those graphs -- if we had an idea, for example, how quickly Roy Halladay's performance degrades when facing a strong offense instead of a weak or mediocre offense, and how quickly a journeyman pitcher's performance degrades, and whether they both degrade at the same rate -- then we could start to guess at an answer to the original tactical question. Until then, we're just shooting in the dark.