Share All sharing options for: Hawkins Field is *Resilient*

Edit: No one listen to me, apparently the groundskeeping crew is a magical cabal of wizards. How else can you explain this transformation from Sunday to Tuesday. Thanks to sharp-eyed reader eazye4u and @VandyBaseball for the heads-up. Still no word on how bad the damage is to the facilities, so the status of the four remaining home games is still up in the air, although the picture below is an encouraging sign. 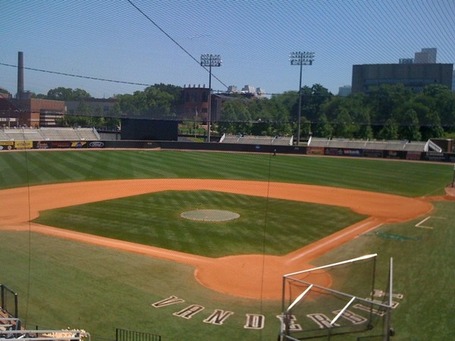 And just two days later, it looked like this.

It looks like the Commodore baseball team may have to get used to sleeping in hotels. With only four home games left, it seems unlikely that Hawkins Field will be in playable condition for next Tuesday's showdown against Louisville or a home series with Arkansas on May 20-22. Thanks to the tweets of players like Will Clinard and Sonny Gray - and the always reliable reporting of Brandon Barca - the dire condition of Hawkins field is apparent: 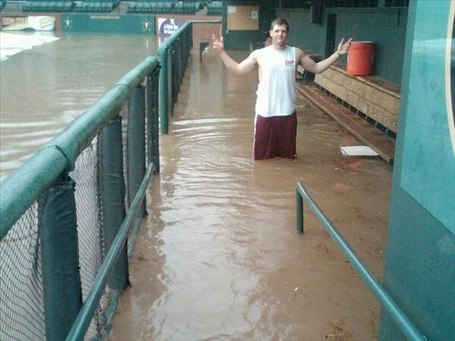 Will Clinard, angry that practice has been canceled because of a little rain.

While the implications for the regular season and SEC Tournament aren't too severe - though a rematch of last year's Regional final with Louisville would have brought a nice crowd for a grudge match - the concern now is Vanderbilt's ability to host a NCAA Regional should the Commodores be deemed one of the 16 best baseball teams in the country. The team is currently ranked #18 and would be in great position to host an exciting four days of baseball if they can make a deep run in the SEC Tournament. However, with two feet of water covering Hawkins Field, it's going to be tough to convince the NCAA Selection Committee that the field is in playing shape. 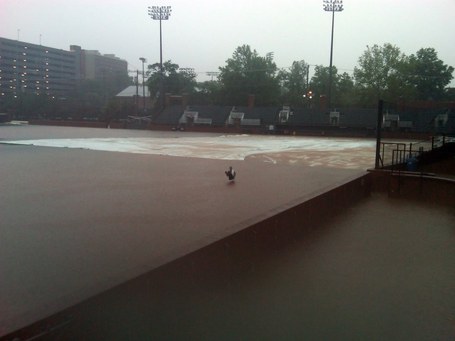 I can't believe they canceled the Georgia doubleheader for this...