Seeing Gus Johnson Cry in Person: A Look Back at Strikeforce: Nashville

Share All sharing options for: Seeing Gus Johnson Cry in Person: A Look Back at Strikeforce: Nashville

Yes, I know, this post is two weeks late. And yes, I understand that MMA has nothing to do with Vanderbilt, a school that doesn't even have a wrestling team. Regardless, I felt I owed it to all six regular readers of Anchor of Gold to recap Nashville's second major mixed martial events in 13 months.

The assignment was an easy one. I got my tickets through the Strikeforce pre-sale in case of a sellout and waited two months for the opportunity to return to Nashville and watch grown men do their damnedest to remove one another from their own senses. Come April 17th, I would be watching three title fights involving five elite fighters; guys with badass nicknames like "King Mo" or "El Nino" or..."The Dreamcatcher." Make no mistake, the headliners in Nashville were the best of the best...outside of the UFC.

For the uninitiated, the UFC is the world's premiere mixed martial arts organization. Many of you may remember it from its inception, which got the sport branded as "human cockfighting" near the turn of the millennium. However, once the New Jersey Athletic Commission put together a set of unified rules for the sport, the transformation from spectacle to sport began. Gone were groin strikes, soccer kicks to the head of a downed opponent, and head butts. In their place, skill rose above savagery. Soon after, elite athletes made their way to the sport, phasing out one dimensional barbarians like Tank Abbott and replacing them with men who knew a way to kick your ass or submit you from any position and who could look good doing it over three five minute rounds.

As the sport's popularity grew, the UFC grew with it, spurred by new owners and president/mouthpiece Dana White. Soon, the organization became the face of mixed martial arts and crushed its competition both domestically and worldwide. However, Strikeforce emerged in 2009 to challenge for some of the UFC's market with the signing of big stars like Fedor Emelianko and Dan Henderson and through merging with Japan's DREAM organization to create the largest cache of talent outside the UFC. As a result, though the UFC has a strong chokehold on the world's top talent, approximately 20-30% of the elite fighters find their way to other promotions, with Strikeforce being the next best thing. And, on April 17th, Tennesseans were privy to watch five fighters ranked in the top ten of their divisions go to work in Strikeforce's hexagonal cage.

History aside, I got to the Bridgestone Arena right before the main card started after a long battle with traffic. Our $25 seats had gotten us solid balcony seats - seats that would have been four times the price had this been a UFC event. However, once we got to the balcony, we were turned away by a nice woman and a polyester rope - it turns out that "The Stone" (her words) hadn't even come close to selling out and we were being reseated. To the lower bowl. To "completely bad-ass seats" (my words). Below is a shot from where we were re-sat due to the non-sellout. 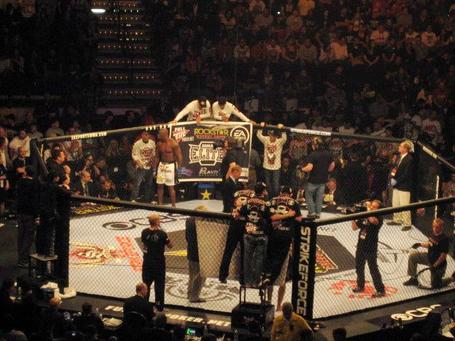 Things were looking great. We scattered to our now-awesome seats just in time for Muhammed "King Mo" Lawal to make his way to the cage with his bevy of scantily clad escorts, including an umbrella holder (in case of poorly timed hailstorms inside the Arena) and flower girl (like at a wedding, only sluttier). His opponent, Gegard "The Dreamcatcher" Mousasi, was a bit more stoic, possibly because he was considering new nicknames during his lonely trek to the canvas.

Unfortunately, the decrease in ticket price also led to a decrease in overall quality. Best I could tell, all the walkout music was generic, meaning that Strikeforce didn't have the money to pay for the rights to have each fighter's song play in the background on CBS. That meant that the fans had to sit through some B-Reel rock and rap instead Dan Henderson's signature walkout to Red Rider's "Lunatic Fringe" or Jake Shields's patented walkout to Lady Gaga's "Bad Romance." On top of that, between every break the speakers blared some terrible techno/rock hybrid that annoyed the fans more than got them hyped. In all, Strikeforce did very little to engage the crowd, hoping that the fights would take care of that. Unfortunately, they didnt.

The fight itself brought some action on the feet, but mostly featured a semi-gassed Lawal bowling over Mousasi with takedowns and then floundering around in his guard like a grizzly bear trying to climb into a beehive for some delicious honey. Mousasi countered this mostly by laying on his back and looking annoyed, while occasionally peppering Lawal's giant head with shots. Rounds One and Three brought some haymakers in the stand-up game, and the conviction of the crowd as they screamed "King!" "Mo!" made this an entertaining fight, especially when Mo, the underdog, took home the title in just his seventh pro fight.

The break between fights for CBS production issues left some room for a beer run, which was quickly rebuffed by $8.25 prices and a lineup of angry looking white guys in Tapout shirts waiting for tumblers of Miller Lite. Fortunately my partner for the night, the talented commenter DWhit, happens to be the MacGuyver of sneaking pints of liquor into places where it doesn't belong (arenas, the Final Four, zoos, restaurants, and children's birthday parties), so we were able to quickly match our BACs with the rest of the crowd and get ready for some top notch xenophobia for Shinya Aoki, who was fighting next.

Fight #2 pitted Strikeforce title holder Gilbert "El Nino" Melendez against DREAM's champion Aoki in a lightweight title bout. Melendez is an up-and-coming lightweight who was gunning for worldwide recognition, while Aoki was best known for crippling submissions, wearing rainbow tights, crying win or lose after a fight, and just being an asshole in general. 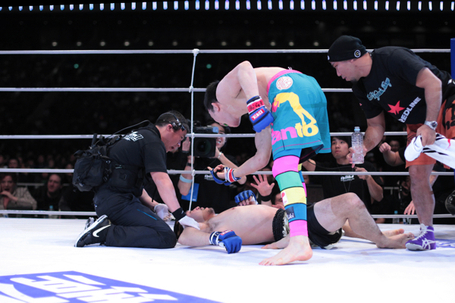 
Aoki, known for his outstanding ground game and boxing that couldn't defeat Australia's strongest kangaroo, wanted nothing to do with Melendez's stand-up, and showed this by flopping to back upon contact and trying to lure "El Nino" into his guard with an aggressive butt scoot. Melendez, obviously prepared, answered this attack by jumping through Aoki's legs and hitting him in the face so hard that it nearly undid 65 years of diplomacy between the U.S. and Japan. Fortunately for Aoki, referee Steve Mazzagatti decided to outlaw the butt scoot, calling for a stand-up seemingly every time Melendez was intent on seeing if he could single-handedly punch a skull to the center of the earth. These stalls and stand-ups led to an ultimately boring five-round decision that the rednecks next to me decided was solely the fault of Aoki's race. Though it felt good to be back in Nashville, make no mistake that this was a boring fight.

After another short break, we were set for the main event, occasional boring fighter Dan Henderson against consistently boring fighter Jake Shields. In this case, boring suggests lots of takedowns with little action en route to a long and tiresome decision. However, the crowd was ready for a knockout at this point after  the first two main-card fights went the distance, and there was hope that "Hendo" could deliver. In fact, the Jake Shields fans were nowhere to be found, and most of the arena roared loudly for Henderson, possibly due to Hendo's decision to re-start the Revolutionary War on the battlefield of Michael Bisping's dumb face in his last fight at UFC 100:

This never gets old.

In the first round, it seemed the 39-year-old Henderson would do it. Seemingly every punch he threw had Shields wobbling as though Shang Tsung was calling out "Finish Him" somewhere in the back of Hendo's mind. Unfortunately, Henderson couldn't remember the code to pull out his Exploding Brain Finisher and Shields stumbled through to the end of the round with his wits intact.

Somewhere in between rounds the momentum shifted, and suddenly Shields was unstoppable. The final four rounds all played out the same way - Henderson would fire a sloppy, tired right hand, Shields would take him down, advance to mount, and then do everything he could to make sure he won a long and arduous decision. Seriously, it was like Shields's contract with Strikeforce pays him by the minute. After five rounds, Jake Shields easily retained his middleweight championship belt.

And then the fun started. Gus Johnson, who had been calling the fights on CBS but hadn't been audible for the live crowd, went into the cage to interview Shields. Jason 'Mayhem' Miller snuck up behind the interview and asked for a rematch of their November fight, all looking very much like the smug jackass host of a MTV show. Shields pushed Miller and the cage lit up as the champion's cornermen rushed in to attack Miller and CBS's cameramen rushed out to avoid the scrum, all while Gus Johnson pleaded "Gentlemen! Please! We are on live television!"

The crowd roundly booed the Shields camp as the left, but applauded Miller and Hendo, even though both had been on the wrong side of a beating just minutes earlier. And with that, the night came to a close on an exciting note, if not a high one. We doubled back across Broadway for cheap beers and Primanti's style sandwiches at Piranha's, and promptly discussed that somehow the King Mo fight, despite its lackluster roots, had turned into the best fight of the night.

With that, the night was over, but it wasn't an encouraging one for MMA in Nashville. The night showed that even with some elite fighters, organizations can't draw huge crowds to the Bridgestone Arena unless it's the UFC (and even they only drew 10k for their Fight Night last April, although it was on a weekday and had lower level fighters on the card). The crowd around us was somewhat knowledgeable about the fights, but it seemed like the three straight limited-action decisions sucked the air out of the crowd, even with the brawl at the end. While it was great to see a major event unfold in Nashville, I can't imagine what crowds would have been like had the UFC had a competing event at Memorial Gym that same night. It's possible that the Music City just isn't a major destination for mixed martial arts.

At least, not yet.