A disturbing trend is emerging. The Commodores can't score on Fridays. In the third time in four weeks, Vanderbilt wasted a strong start by Sonny Gray in the first game of the series to put them in a hole that they couldn't dig themselves out of. This weekend's series loss was the team's third in four weeks, dropping them to 6-6 in the SEC and kept them firmly entrenched in third place in the SEC East.

Over the last four Fridays, Gray has been outstanding on the mound, yet has gotten little support from his offense as the Commodores have squared off with opposing teams' top starters. Despite an ERA of 1.93, the sophomore pitcher has gone 1-3 in league games, thanks mainly to Vandy's paltry three runs per game over that span. In fact, if you exclude the team's seven run outburst against Kentucky, the 'Dores are are scoring just 1.67 runs per game on Fridays in SEC play.

Gray has to be getting a little frustrated at this point. Despite some masterful performances he's been unable to lead this team to victory on Fridays, digging the Commodores a hole that they haven't been able to climb out of to secure a series win. In the three conference match-ups where Vanderbilt has lost the opening game, the team has gone 1-2 in each series. Conversely, after winning their opener against Kentucky, they swept the Wildcats en route to their strongest performance of the season.

Despite the tough series, the Commodores still avoided their first losing week of the season by adding a big 12-5 win in a midweek showdown with Belmont.

Game 0 - Vanderbilt 12, Belmont 5: The Commodores jumped all over the Bruins in the first inning and held on to grind out the win. Despite a shaky performance from starter Drew Hayes, Will Clinard and Grayson Garvin shut down the Belmont threat with four scoreless innings of relief. Jason Esposito's two-run triple gave the 'Dores some breathing room after the visitors cut the lead to 6-5 in the sixth inning.

Game 1 - South Carolina 3, Vanderbilt 2: Gray's complete game was all for naught, as Gamecock starter Blake Cooper stifled the Commodores for over seven innings to win game one. Vanderbilt mustered up just three hits on the night and couldn't do much to support their ace in the opener. Despite jumping out to a 2-0 lead in the first, South Carolina responded with three runs in the top of the second to close out the scoring. For fans who like pitcher's duels, this game delivered in the final seven innings, as the two teams combined for just seven hits over that span.

More game recaps, plus AoG's prestigious pitching and batting awards after the jump...

Game 2 - Vanderbilt 8, South Carolina 2:: The shift to Saturday starter worked wonders for sophomore Jack Armstrong, who responded with the longest outing of his collegiate career in a 8-2 win. Armstrong allowed just one earned run in eight innings to lower his ERA to 3.43 and even the series at 1-1. The Commodores won with a balanced attack at the plate, as the back end of the batting lineup excelled at driving home the front half to score runs for Vanderbilt. Anthony Gomez, Joe Loftus, and Connor Harrell all had two RBI for the 'Dores.

Game 3 - South Carolina 2, Vanderbilt 0: Vanderbilt's bats went silent once again as the team faced their first shutout loss of the season. Taylor Hill gave up a leadoff home run, and then just allowed one hit after that in 7.2 innings of stellar pitching. Brian Harris provided both the Commodore hits on the day as the Gamecock hurlers faced the minimum amount of batters to clinch the series win on Sunday.

The entire damn rotation. The starters allowed just five earned runs over 24.2 innings of work, yet the team still went 1-2. That seems unfair. Sonny Gray, Jack Armstrong, and Taylor Hill pitched some nasty innings, and if these guys can show up like that every weekend they'll provide a 1-2-3 punch that can propel the Commodores into the top ten nationally. Hopefully the offense will come around soon to provide some consistent backup. It would be nice to say that Curt Casali's ever impending return will be the answer, but the issues seem to be larger than that. 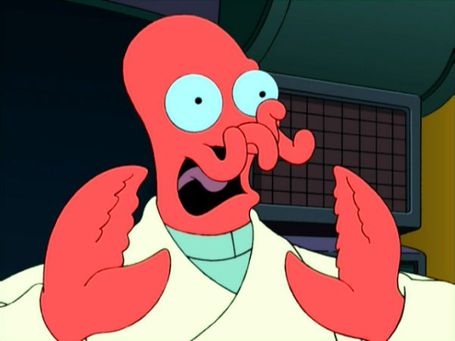 No one. There's a new rule here at AoG - if the team fails to get more than three hits twice in the same three game series, then the Clu Haywood Award gets retired for the week. Honestly, who would get it after this past session? Brian Harris, with two hits and a run scored against SC? Andrew Giobbi and his one RBI? Jason Esposito with two RBIs and a run? The play at the plate sucked this week. Enjoy the Dr. Zoidberg "Your offense is bad, and you should feel bad!" Award instead. We'll probably be seeing more of it come football season.

So, there's your recap. Award winners can pick up their custom-made plaques at the AoG main offices located next to the intramural fields (so we don't have to waste time getting ready for softball season). This weekend's loss was entirely on the offense, as the Commodore batters couldn't get much going at the plate. However, the pitching seems to be hitting a peak for the season - and hopefully it's a plateau to carry this team through the rest of SEC play and throughout the postseason. If Gray, Armstrong, and Hill keep pitching like they did this weekend, no team will want to face the Commodores in any scenario - whether it is a three game series, or a double elimination tournament.