Share All sharing options for: Vandy's Worst Tournament Losses in the Stallings Era

Since Kevin Stallings came to Vanderbilt in 1999, he's led the Commodores to four NCAA Tournament appearances, each with their own painful exits. CKS has two Sweet Sixteen appearances to pair with a couple of upsets to 13 seeds in the first round. Each team has had their share of potential Vanderbilt Hall of Famers (Shan Foster, A.J. Ogilvy, Derrick Byars, and Matt Freije come to mind), but none have been able to take Vandy fans back to the days of Clyde Lee with an Elite Eight appearance.

Needless to say, Vanderbilt's four appearances in the last seven years have left some painful memories. Two buzzer beaters and two blowouts, to be precise. While Vandy's best wins in the Stallings era often make for some good bar conversation (vs. Wichita State, vs. NC State, Shan Foster vs. the World), the topic of their most painful losses are generally saved for late nights following some MD 20/20 induced madness and unsavory women. In the spirit of the awful post-Tournament hangover still hanging over the heads of Vanderbilt fans in 2010, let's attempt to rank what have been the Commodores' most tragic NCAA Tournament exits under Kevin Stallings.

In order from least painful to most painful: 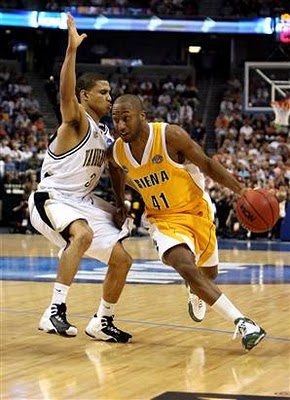 2008 - vs. (13) Siena: Vanderbilt was a four seed and had beaten then #1 Tennessee that season, but even to many Commodore fans, their record was a mirage. The 'Dores benefited from a soft out-of-conference schedule and the awesome home court advantage of Memorial Gym to rise to a seeding that they probably didn't deserve. Still, led by Shan Foster, Alex Gordon, and super frosh A.J. Ogilvy, the sky was the limit for this team. Sure, they looked listless outside of Nashville (including late season losses at Arkansas and Alabama), but surely Sugar Shan could shoot them into the Round of 32, right?

The Game: In a word, no. Siena latched on to Vanderbilt's jugular from the start, and the game was essentially over at the half. The Saints had been many pundits' upset pick, and their stars Kenny Hasbrouck and Tay Fisher just destroyed the Vandy backcourt. Jamie Graham had as many points off the bench (six) as starters Gordon and Jermaine Beal had combined. Siena blew the Commodores off the court and out of the tournament, 83-62.

Mitigating Factors: The 21 point loss was the second biggest margin of victory by a 13 seed over a four seed of all time, making the defeat slightly infamous. Siena went on to lose in the second round (to a 12 seed), but scored another tournament upset in 2009, taking down Ohio State, which helps raise Vandy's profile slightly in retrospect. The game was Shan Foster's last in a Vanderbilt jersey.

Everyday Pain Comparison: The closest comparison? Your girlfriend (or boyfriend) is forcing you to watch a marathon block of The Big Bang Theory, and you have no way to get out of it. It's one of those things you think could be bad, but have no idea the full scale of the trainwreck you are about to witness until you get about ten minutes into it. After 45 minutes, you just want it all to go away, because it's sure as hell not going to get any better.

2004 - vs. (2) Connecticut: The second game on this list is the team's other Tournament blowout. Vanderbilt made a surprise run to the Sweet Sixteen, rallying from a 10 point deficit with under three minutes to play to shock #17 North Carolina State. This created a showdown with eventual national champion Connecticut. After the game with the Wolfpack, it seemed like anything was possible with this team, led by Matt Freije's all-around play and Dawid Przybyszewski's creative spelling. Even with long odds, hope was in no short supply in the team's first round of 16 game since 1993.

The Game: Freije went 3-18 from the field, effectively sinking the team's chances before they could start. A Przybyszewski three-pointer gave the team a 3-2 lead a minute into the game, but that was the last time the 'Dores would be in front. Vanderbilt was able to pull within seven points with about twelve minutes to go, but a five minute scoring drought following that sunk the 'Dores against the Huskies, who boasted five first-round draft picks in their 2004 rotation. Aside from the brief reprieve in the second half, this one was all Connecticut.

Mitigating Factors: UConn went on to win the national title, which helps soften the blow of their 22 point win. The Huskies' blowout was a trend for the year, as all but one of their games in the 2004 tournament were decided by nine points or more. The game was also Matt Freije's last game in black and gold, but since he wasn't nearly as likable as Shan Foster, few seem to notice these days.

Everyday Pain Comparison: This was like getting shot down at the bar by a woman or man that is much more attractive than you, but only after you've poured $40 into buying her/him drinks. Then, when you get up to go to the bathroom, you return to find that she/he has left. Upon walking through the parking lot, you find that she has also keyed your car. 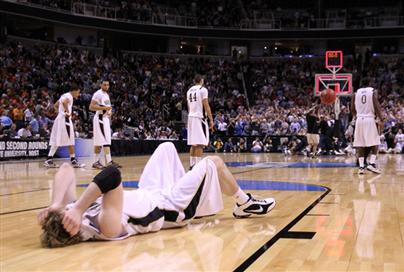 2010 - vs. (13) Murray State: Vanderbilt's most recent loss might be the most difficult to gauge. Based on recent site traffic trends, its safe to say that many of you are still too scarred to even check in on your favorite university's athletics (excepting that, you just hate college baseball updates) - so emotions still run high when talking about the Murray State loss. After a win at Florida on the Gators' Senior Night, the Commodores were flying high and about to head in to the SEC Tournament as the clear number two in the conference. A pair of losses to South Carolina and Mississippi State at the end of the season were disconcerting, but dismissed as a pair of missteps from a supremely talented team.

The Game: Barack Obama may have seen this coming, but Vandy fans did not. The Commodores' season long allergy to defensive rebounding reared its ugly head again, allowing the Racers second chances that allowed them to control large portions of the game. Vandy looked like they would take control in the final minutes behind the big time play of Jermaine Beal and John Jenkins, but Murray State out-iced them, answering every big VU shot with one of their own. Vandy had a chance to hold for the last shot while down 64-63, but Beal's drive to the basket gave the 'Dores two made free throws and enough time on the clock for the Racers to answer. One missed three pointer and botched defensive rebound later...well, we know how this one ended.

Mitigating Factors: This was the most talented Vanderbilt roster, top-to-bottom, in Kevin Stallings's career, and possibly all-time at Vanderbilt. The shot went through the net as time expired, extinguishing any hope whatsoever of a miracle comeback at the buzzer. Once again, all the sportswriters that railed against Vandy (basically everyone but Jay Williams, which should have been a sign) were proven right. Additionally, Jermaine Beal scored the last two points of his career not on a swagger-three, but from the free throw line, which just seems wrong.

Everyday Pain Comparison: You're enjoying a trip to the zoo when an earthquake hits. It's terrifying at first, but once the shaking stops, everything is calm again. You feel a cool wave of reassurance, but then you start thinking of aftershocks, worrying about tsunamis, and about whether or not your loved ones are okay. And then a gorilla escapes from one of the exhibits and beats the shit out of you. 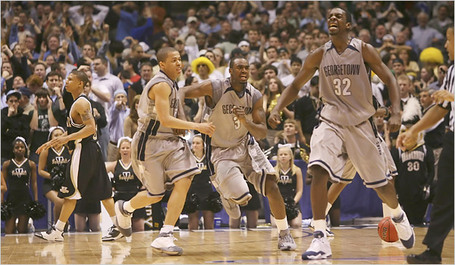 2007 - vs. (2) Georgetown: This was supposed to be the year. Derrick Byars, Shan Foster, Alex Gordon, and especially Ted Skuchas put the rest of the world on notice with a big time upset of #1 (and eventual national champions) Florida in Nashville. After blowing George Washington out of the water, Byars and Foster came up big in a double OT win against #13 Washington State, leading to a showdown with #8 Georgetown. The Hoyas were a dangerous team, led by Roy Hibbert and Jeff Green, and had dismantled the Commodores at Memorial in the season opener. However, this was a different Vandy team - a more composed team that was finally playing to their potential. Things were going to be different, right?

The Game: Vanderbilt acquitted themselves on the court, pushing the Hoyas to the limit. Behind big nights from Byars, Foster, and Dan "the Danimal" Cage, they ruled the first period against the Big East powerhouse They had led by eight at the half and held on to a 65-64 lead in the final seconds of what had become a dogfight, but Georgetown had the ball and a top five pick on their team. Double teams and rules of basketball be damned, Jeff Green walked through a tight defense and banked in a shot with 2.5 seconds left. Vanderbilt had no answer and the Hoyas went on to the Elite Eight.

Everyday Pain Comparison: You hear that an asteroid is headed directly towards the Earth, and only you and your rag-tag team of oil drillers have any chance of stopping it. After some light-hearted astronaut training, you go up in space, leaving your beautiful daughter (Liv Tyler) behind, waiting for the safe return of both you and her fiancee, another roughneck in your gang of hoodlum drillers of whom you disapprove. First, you blow up the space station Mir. Then the second shuttle crashes. While you land safely on the asteroid, you realize that it's too difficult to dig through in order to plant the nuclear bomb you have on board.

Then your crew starts suffering from space dementia.

However, with a little elbow grease and redneck wizardry, you begin to punch through the rock. Soon, you've drilled deep enough to insert the nuke that will split the asteroid and save the earth. You're relieved and things finally seem to be working out...until the remote detonator fails. Someone has to stay with the bomb to set it off. You draw straws, and your daughter's bastard fiancee gets the short one. Only, it's now that you realize you've come to love and accept him as a son.

You decide that you'll be the one to make the ultimate sacrifice. You selflessly take the detonator (after a struggle) and go back to the asteroid's surface. An Aerosmith song rises in the background, only it's not a good one. You'll be the one to blow it all up. To allow your daughter to marry a roughneck oil driller like her old man. To save your crew. To save the world. A single tear rolls down your cheek.

Then a gorilla comes and beats the shit out of you...