Inside the Numbers: A look at basketball recruits since 2002 - and their impact on the Commodores.

Share All sharing options for: Inside the Numbers: A look at basketball recruits since 2002 - and their impact on the Commodores.

Spurred on by Vanalyst's awesome FanPost documenting the mileage Coach Kevin Stallings is getting out of a group of players who were rated good - but not great - coming out of high school, I wanted to take a deeper look into Vandy's past recruiting and what they brought to the table in Nashville. While 2009-2010 features CKS's deepest pool of talent, other years have brought equal or possibly greater success with less heralded athletes. Using Rivals and ESPN's recruiting rankings, we can examine if there's any observational correlation between a solid recruiting class and NCAA success for the Commodores under Kevin Stallings.

Documented in the full post are Vanderbilt's recruiting classes from 2002 to 2009. Coach Stallings began at Vandy in 1999, so the 2002 class represents the first year that his entire squad was made up of players he recruited. Additionally, it's also the same year that Rivals and Scout began archiving their high school recruiting reports. The player ratings/rankings come from Rivals.com and Scout.com, two of the leaders in high school basketball recruiting analysis. Data from ESPN.com was also regarded, but ultimately wasn't used since their archives only date back to 2008. Also included are the scholarship offers these players received in addition to their Vanderbilt offers, in order to give a better background of how sought-after these recruits were, and which teams CKS was battling with to secure their services.

A full breakdown after the jump...

* player transferred to (or from) Vanderbilt, and rankings represent their scouting report coming out of high school. As a result, it should be noted these players have limited impacts (two years or less) on their class's overall success.

For the sake of averaging player rank, different variables were used. For example, if in 2008 a four-star recruit were ranked 150, then a Vanderbilt player with the same number of stars was estimated to have a rank of 160. If the player's star ranking was one level below the 150th player slot, they were given an estimated rank of 175. If they were two levels below, they were assumed to have a ranking of 200. This allowed for more accurate class rank averages in instances where players were slotted in outside the Rivals 150 than a static value. For Scout's positional rankings, unranked players were given a positional value of 40 to adjust the overall weight of the class.

The rise in Kevin Stallings' recruiting and overall team performance over time is significant. As the team's recruit rankings have jumped from low 3 star recruits to high 3/low 4 star averages for a class, the team has seen a jump in production as well. Though the rise hasn't been consistent from year to year, an increase of approximately .100 points in class winning percentage can be seen in just a four season span between 2003 and 2007. While many of the Commodores' key players have been diamonds in the rough that brought big wins, the connection between higher-rated high school players and overall winning percentage appears to be legitimate. 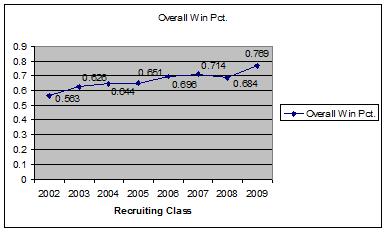 The moral of the story here is that while impressive recruiting isn't a direct blueprint for success under Kevin Stallings - the 2002 and 2003 classes were below average but still helped form the backbone of a team with a Sweet Sixteen appearance in 2004 - highly ranked recruits have a correlation to better winning percentages. It can also stand to reason that the performance of the lesser-heralded recruits may have paved the way for the signing of better recruits through raising the profile of Kevin Stallings' program through NCAA Tournament wins. At any rate, the past four years have been some of the team's most impressive on the recruiting trail, and those early signings have been reflected in the team's success on the court. How the team performs over the next two seasons will go a long way in supporting or refuting this theory. 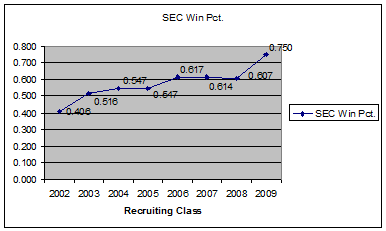 This also bodes well for next year's recruiting class, which already includes two Rivals-150 recruits. Assuming that Jermaine Beal is the only loss heading into 2011, this team will be able to field a rotation consisting solely of players who were considered among the national elite amongst high school basketball players - with the exception of glue-guy Andre Walker. Despite the loss of the senior playmaker, this group would have a chance to build on John Jenkins's .769 winning percentage well into the future. Though recruiting isn't perfect and prospects can still be hit-or-miss, Stallings's performance chasing recruits has had a positive impact on his performance on the court at Memorial Gym.

What has been Vanderbilt's best recruiting class since 2002?