View from the Student Section: UK at Vandy

Share All sharing options for: View from the Student Section: UK at Vandy

Last night was heartbreaking, but I, for one, am so proud to be a commodore.  This game was absolutely incredible, and although we lost, our players, coaches and fans gave it everything we had.  We played with heart and intensity, and with just a bounce or two more going our way, this game would have been ours.  Coach Stallings did an excellent job of preparing our players, we played tenacious defense, outrebounded a bigger team and played through a difficult game thrown at us by the officials.  The atmosphere in Memorial was absolutely crazy.  The line for the student section wrapped all the way around the corner onto Jess Neely before the doors even opened.  Shan Foster spent the whole game front and center in the student section leading chants, painting his face and doing everything he could short of jumping up on the court to help Vandy pull out a win.  I was lucky enough to be in the second row right next to Shan, absolutely crazy.  UK travels well and they had a solid contingent at Memorial but I don’t think Coach Cal will be looking forward to playing here again, it was loud and rowdy for the whole game.

Steve Tchiengang played out of his mind.  He was flying all over the place and making that extra effort on his way to eight boards.  He was a real spark off the bench, I love his intensity, even when it translates to him fouling out, I would much rather see that, then weak play against a frontline like UK’s.  Jeff put in another great game, but had trouble with turnovers once again, usually off of lazy passes.  The most disappointing moment of the game for me was Beal giving up the ball in the closing seconds when it looked like he had a clear path to the rim and could have at least picked up a foul and earned a tie or the lead from the line.  Jenkins got Wall to bite on the pump fake once, but couldn’t pull it off a second time. 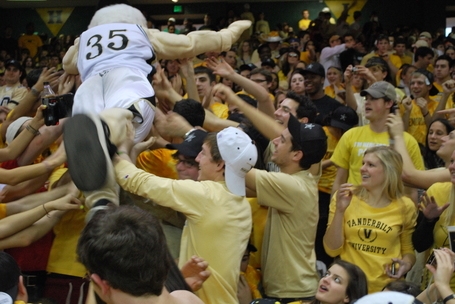 The t-shirts that Vandy Fanatics gave out for the game proclaimed, "Memorial Gym: Where 3-point Streaking is Encouraged" got some grumbles from students after the game in the wake of our woeful 2-20 shooting from beyond the arc, but Kentucky obviously put a lot of emphasis on shutting down our outside shooters, and their length outside bothered us all night . 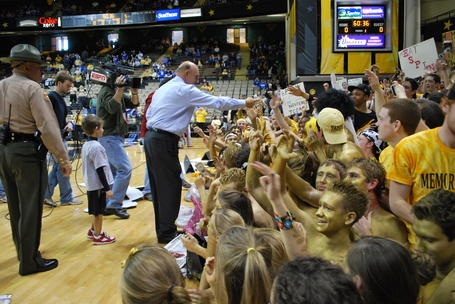 I am not a big fan of complaining about officiating, but anyone at the game can attest to a couple of blatant missed calls, going both ways.  Taylor’s tip-in was called basket interference by an official 35 feet from the hoop, looked to me like it was well off the cylinder.  It was nice to see that the refs were allowing Cousins and Wall to get accustomed to NBA officiating, there was more walking going on out there than in a dog park.

As disappointed as I was with the final result, I think our team will come out of this stronger and more prepared for battles like this one that are sure to come over the next few weeks.  This one hurt for us fans, but hurt a lot more for the players, couldn’t be more proud of the effort they put into it.  Keep your heads up and let’s finish the regular season out strong and pull out a win the SEC tourney.  Much love for Commodore Nation today and always. 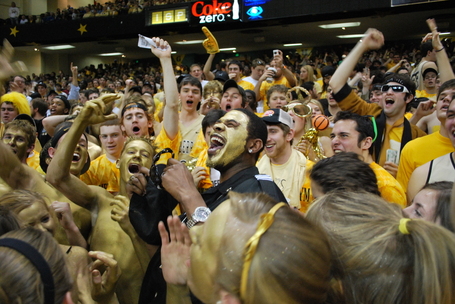