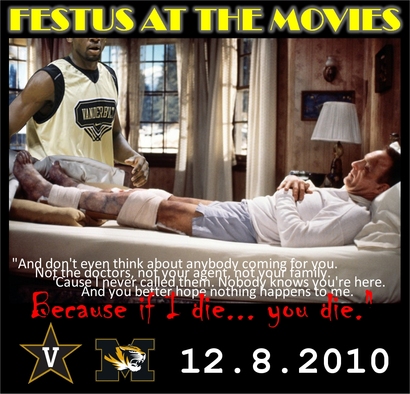 Vanderbilt heads to Missouri to face the 15th / 11th ranked Tigers in Mizzou Arena. Missouri's Mike Anderson has self-branded his team's style as "the fastest 40 minutes in basketball" (though we won't hold it against him that they are actually ranked 14th in adjusted tempo by Kenpom, behind illustrious basketball powers such as VMI, Seattle, and Alcorn St. - VMI is averaging a whopping 80.1 adjusted possessions per game! Missouri only 72.7. Unadjusted Texas St. takes the cake at 80.1, Missouri at 75.0).

Last season, these teams matched up in Memorial Gym, with Vanderbilt coming away with an 89-83 victory. Looking back, it's a little unsettling that the Commodores will be without starting PF Andre Walker due to mononucleosis. Plus, it's at their house, where Mike Anderson and Missouri as a pairing have yet to lose to a non-conference opponent (he's been there 5 seasons).

Vandy has certainly played a tougher non-conference slate to date, though Missouri has played the strongest opponent of either team in Georgetown (a game in which they lost in a semi-home setting in Kansas City. Vandy is ranked higher, according to kenpom. When it comes down to it, Vandy and Mizzou are fairly evenly matched. When you look more at the individual tempo-free statistics, VU does seem to hold a slight edge. Of course, this really doesn't adjust for Andre Walker being unable to go and for this being a road game for the Commodores.

Don't expect Missouri to run the press for a full 40 minutes. Right now they're really only utilizing an 8 man rotation; Thankfully this game isn't coming later in the season when they can be more reliant on their freshmen. As it is, they're still going to full court trap us, but you might see them drop back and set their half court defense more than you normally would. If Vanderbilt turns the ball over at their average rate, they probably won't need to waste the energy running that system the whole game anyway.

Keep in mind that these numbers have come against vastly different strengths of schedules. Of course, Missouri could just be playing down to their competition...

Missouri also doesn't really have anyone that can match up with Festus on the interior. If Skynet can stay out of foul trouble, they will probably have to play a zone in an attempt to neutralize him, which of course would be music to John Jenkins ears after the Belmont game.

The defensive matchup everyone should be looking forward to is probably Jeff Taylor on Marcus Denmon, if Stallings goes that route. English is listed at 6' 7", which might be too much for JJ to handle. If that's the case, he might draw Denmon, who is only 6' 3".

Four Factors: Vanderbilt holds sizeable advantages in OReb% (and DReb%, btw), FTRate, and has a slim eFG% advantage. It should come as no surprise that Missouri has a nice TO% advantage. Prediction: I think Vandy will probably best the Tigers in FTRate and OReb%. You would have to think Missouri will win the TO% battle. I would think the game probably comes down to eFG%. If Vandy's hitting from outside (or Fezz continues to show his geometric learning rate), I think we spring the upset. That non-conference home win streak has to end sometime for Missouri, right?

Rock M Nation is the SB Nation affiliate for the Missouri Tigers. Check out their game preview.

Tipoff is scheduled for 20.00 CT and the game will be televised by ESPNUHD (Comcast ch. 285 HD), though the game will also be available on ESPN360.com. Our open gamethread will go live about an hour before tipoff. Also, don't forget to head over to Stat-King to submit your predictions for the game.