Share All sharing options for: Periscope: #24 Vanderbilt vs. Marquette 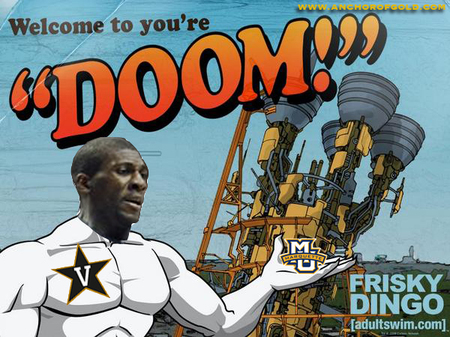 Tonight, Vanderbilt squares off against the Marquette Golden Eagles for the first time since the first round of the 1974 NCAA Tournament, a game which Marquette won 69-61 in Tuscaloosa, AL. Payback's been a long time comin'. Marquette leads the all-time series 3-1.

Vanderbilt could be back to full strength tonight as well. Andre Walker has been cleared to play after his bout with mononucleosis, with Stallings even mentioning during his weekly call-in show his pleasant surprise at how well AW had practiced. Lance Goulbourne finally made it back to town after seeing his original flight home canceled due to the light dusting of snow NYC just received. It is still unknown when the NCAA will rule on his eligibility. If a rush decision comes in between now and gametime, he would be available, though it seems that the NCAA may currently have a skeleton crew in place until January 3rd, which would make such a case improbable at this point. Vandy has certainly played a tougher non-conference slate to date, though Marquette has played the strongest opponent of either team in Duke. Vandy is ranked higher, according to kenpom. Keep in mind that these numbers have come against vastly different strengths of schedules.

Anonymous Eagle is the SB Nation affiliate for the Marquette Golden Eagles. Check out their game preview.

Tipoff is scheduled for 20.00 CT and the game will be televised by ESPN2HD (Comcast ch. 203 HD in Nashville), though the game will also be available on ESPN3.com. Our open gamethread will go live about an hour before tipoff. Also, don't forget to head over to Stat-King to submit your predictions for the game.