Feast or famine. That just about sums up Vandy's depth in terms of pure shooting guards for 2010-2011. At the top, you've got John Jenkins, a returning sophomore who was not only Vanderbilt's highest rated recruit since most can remember, but also 2010's SEC Sixth Man of the Year. At the bottom, you've got redshirt sophomore Jordan Smart, a non-scholarship player with just 10 games of garbage-time experience under his belt. In between? Some guest appearances by starters like Brad Tinsley and Jeffery Taylor, but not nearly enough time to drive them away from their starring roles at point guard and small forward. Between the talent of Jenkins and the lack of depth behind him, it's safe to say that shooting guard will be one of the most important positions for the Commodores this season.

Jenkins is poised to breakout in 2010-2011 after a steadily improving freshman year that saw him take over Brad Tinsley's role in the starting lineup. However, without a clear-cut SEC-ready backup, Coach Kevin Stallings is going to have to be creative about managing minutes at the position for the upcoming season. Stallings tends to give even his best (young) players under around 30 minutes per game (refuted: see the comments section below), so his lineups will have to plan around Jenkins's absence for between four to eight minutes each half. The most intuitive switch would be to slide Tinsley over to the spot while freshman Kyle Fuller runs the point. This solution presents some problems though, as Tinsley is likely to be playing big minutes as a starter and will often be unavailable when it becomes time to substitute. Another option would be to slide Taylor in from small forward, where Vandy can replace him with a number of talented players (Andre Walker, Lance Goulbourne, and Rod Odom, to name three). However, this would create the same fatigue issues as it would with Tinsley, and Taylor - fresh off of adding 25 pounds of muscle to his frame - may not be as well suited for the switch.

As a result, Stallings is going to have to run through some unique lineups. Maybe Odom is lithe and quick enough to guard the two for five minutes per game. Maybe Fuller's quickness can overcome his height and allow him to snag some more rotation minutes when Jenkins heads to the bench. Or maybe Jordan Smart can surprise us all and step up like Joe Duffy did for this team in 2008-2009. Regardless of the situation, shooting guard is a position to pay close attention to this season. Let's look at our personnel:

John Jenkins - Jenkins arrived on Vanderbilt's campus as a local hero from Gallatin, and the 15th best college prospect overall according to Rivals.com. He immediately became the most hyped product of Stallings's recruiting and possibly for the university as a whole, and he did not disappoint on the court.  He shot a mind-blowing 48% from three-point range and scored 11 points per game en route to Sixth Man of the Year honors in the SEC. He almost single-handedly lifted the 'Dores past Florida in the O-Dome with a six three-pointer performance, dropped 25 points on Georgia in the second-to-last game of the regular season, and lit up Southern Mississippi with a perfect shooting night (6-6 from three, 2-2 at the line).

The sophomore is a master of his trade, and that trade is shooting the hell out of a basketball. With a silky smooth jumper and range out to 25 feet, Jenkins is the team's biggest threat from beyond the arc since Shan Foster. He can out-shoot zone defenses and is comfortable with getting a shot off with a hand in his face. In last year's home game with Kentucky, he even showed that he's ready for high pressure situations, calling for - and taking - what would have been a game changing shot in the final seconds of a tight game. Though his attempt was blocked by John Wall, it still showcased Jenkins's major stones in a do-or-die situation.

However, he will have to expand his horizons to increase his value to this team and as a NBA prospect. While having the shooting ability of a young Reggie Miller is enough to win a few games on its own, the sophomore lacks the basic playmaking ability you'd associate with a shooting guard. Too often, he was a black hole once the ball was in his hands and as a result he averaged just one assist for the season. He also needs to become more versatile with putting the ball on the deck and driving, especially as he'll be receiving tight coverage on the perimeter. Jenkins attempted nearly twice as many threes as two-point shots (149 to 85) and his 2pt field goal percentage actually lagged behind his long range rate (44.7% to 48.3%). 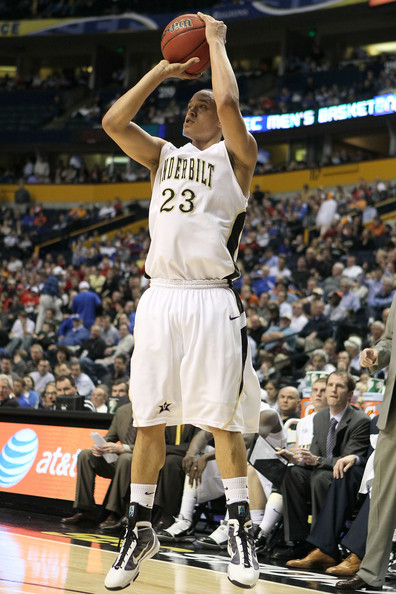 Silky...via www4.pictures.zimbio.com
While its a good thing that he's taking more of the shots that he's more efficient at making, Jenkins will have to become more versatile as a focal point of Vanderbilt's offense in 2010-2011. He'll be counted on to be the Shan Foster to Taylor's Derrick Byars, and that means that he'll have to become a sufficient passer, rebounder, and ballhandler in order to keep defenses from simply hounding him at the three-point line. To be successful, it will be imperative that he transforms from specialist to shooting guard for the upcoming season. He's on his way, but there's still lots of progress that he needs to make.

Defensively, Jenkins doesn't have great lateral speed or the physical strength to be an elite defender, but he's got long arms and can pester opposing guards when he wants to. He's a smart defender and doesn't make significant mistakes or cheat when out of position to load up on dumb fouls. Another year in the weight room should be a significant benefit for him, but he'll still be reliant on an excellent defensive frontcourt to cover his back with smothering help defense. The Tinsley/Jenkins combination defending the perimeter will be adequate, but teams with solid offensive backcourts will have a good chance of dragging the Commodores into a shootout.

In all, Jenkins has proven that he's a major commodity at the NCAA level. His shot is nearly unstoppable and he's the ultimate safety valve on offense. Expect him to contribute 10-15 game-killing dagger threes throughout the season to demoralize opposing teams and their fans as he steps into the big-shot swagger role that Jermaine Beal vacated after graduating. The torch of clutch shooting has been passed on to John Jenkins, and he's got the opportunity to take full ownership of it. Though it will be tough to usurp Shan Foster's throne in the eyes of Vandy fans everywhere, Jenkins has the talent and the drive to do it. Let's just hope he stays on campus long enough to become a legend.

Jordan Smart - Smart is a redshirt sophomore who came to Vanderbilt as a non-scholarship 6'6" twig who has grown into a potential contributor at the college level. After weighing in at just 165 pounds as a freshman, the Kentuckian has filled out to 200 pounds in hopes of picking up some short minutes at the wing this year in Nashville. He appeared in 10 games last season, failing to register a point, and is no doubt an avid reader of Mark Titus's Club Trillion blog.

Smart is a three-point specialist whose game evokes adjectives similar to watching Wes Welker run back a punt. He's a hustle player who has made strides as a walk-on but probably still isn't ready for big time minutes in the SEC. While he's got good size for the position, he'll have trouble guarding faster 2s and needs to add more strength to cover opposing 3s. Much will be made of his grittiness and great attitude, but little of that will show up in a box score.

He'll have a shot to prove himself early in the non-conference schedule, and if Smart can mop up in garbage time, he might get a few looks down the road for a few minutes per game. He won't be counted on for much, but he can still have an impact if he's able to keep things running smoothly while he's on the floor, allowing guys like Jenkins, Tinsley, and Taylor to take much needed breaks. If he can't do that, his appearances will be limited to pre-game shootarounds and walk-in shots on the Commodore Cam.

Next up - Small Forward: Jeffery Taylor and about a dozen other capable guys.