Share All sharing options for: Women's Lacrosse named 10th most likely to lose to Northwestern in NCAA Championship game.

The news broke this week that the Commodores were ranked 11th in the Lacrosse Magazine preseason polls, but I won't be posting much on women's lacrosse this year. It's not because I don't like the sport but rather because it seems damn near fruitless to write about a team whose highest aspiration this season is essentially second place. That's not a slight to the Vanderbilt team, but rather respect for the juggernaut Northwestern women's lacrosse team, which has won five straight national championships going into 2010.

The 2009 team at Northwestern was their most dominant, reeling off 23 straight wins and demolishing North Carolina in the national championship game 21-7 to cap an undefeated season. Vanderbilt fared better than most opponents against the Wildcats, dropping games 22-10 and 15-10 on their way to an NCAA tournament appearance. However, while the 'Cats were celebrating, Vandy was rebuilding after a third straight opening round loss. 2010 looks like a similar situation; though Northwestern graduates 10 seniors, they look to be as dominant as ever in setting up a UCLA basketball (or Penn State volleyball) style dynasty in their sport.

In fact, Vandy can't even take solace in conference championships, since Northwestern shares the same division as they do. In the six team American Lacrosse Conference (ALC) - South Carolina's membership is pending - Vanderbilt and Northwestern stand atop the rankings. This guarantees that the teams play at least once in the regular season, and likely once more in the conference playoffs. It has the makings of a great rivalry, if only it were competitive. Since Northwestern's title run started, the closest the Commodores have come to a win have been a pair of five goal deficits in 2009 and 2006. 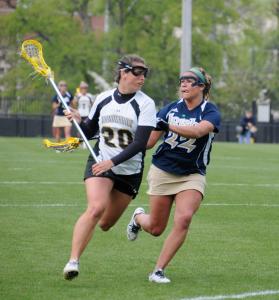 2009 All-American Cara Giordano has graduated.  Who will step up for the 'Dores?

But hopefully the tides can shift.  Vanderbilt made a big leap after 2006 to become a top fifteen program. Recently they've outperformed noted lacrosse powerhouse Johns Hopkins to take over the #2 spot in the ALC. They've scored recent big time wins over Duke (Ranked #3 in a 11-10 win in 2008) and Notre Dame (Ranked #6 in 2009), and have taken out several ranked opponents in the meantime.  This team knows how to win, but has trouble doing it on the biggest stage.  Maybe a little more seasoning will change that.

Their recruiting continues to grow as they separate themselves from the pack in the NCAA, and since they offer many of the same benefits as Northwestern (strong academics, good athletics, private school, beautiful campus, etc) it seems to reason that soon some of the key players that are headed to Evanston will be playing in Nashville instead.  A few tournament wins would put them on the map for more players, and the national exposure of playing in a title game on ESPN would be a huge boost for both the squad and the school.

This Commodores team is close to a breakthrough, and they have three solid years of building to push them towards it.  Once they get there, they'll open the floodgates to bring in better recruits, attract more fans, and prove themselves as an elite team.  But until they can compete with Northwestern, it doesn't make sense to write much about them.  It's just the same story we've seen for the past five years.