2006/07 looked like it was going to be a mediocre year for the Commodores basketball team.  A lackluster loss to a very good Georgetown team opened the season, and was followed by a loss at Wake Forest (similar to the Cincinnati/Illinois losses) and OOC losses to Furman (!) and Appalachian State (!!) before opening the SEC schedule with a loss against Auburn.  The lone bright spot of the first two months was a win over a 25th ranked Georgia Tech squad and as of January 9, 2007, this team looked like it would be NIT bound at best.

And then, with a last-second tip-in by Shan Foster in a home win against Tennessee, the whole season turned around.  The team only dropped five other SEC games down the stretch (six including the SEC tournament), but ripped through Kentucky (twice), LSU, Mississippi, and #1 ranked Florida all leading into a memorable NCAA tournament run that only ended due to Jeff Green's cheating and the officials' unwillingness to allow the team a "do-over game" if Alex Gordon was able to hit a left-handed shot with his eyes closed from the scoring table after the game - which he totally made.*

This team suddenly defended well, drilled their open shots, and excelled in Coach Kevin Stallings's offense as they climbed into the national rankings.  So what was the difference?  And what does this edition of the Commodores need to do to pull it off?  It all comes down to role players vs. basketball players.

The 2006 squad was arguably a two man show, with Derrick Byars and Shan Foster garnering 2nd team All-SEC honors in the preseason.  The team was also devoid of veteran leaders - Byars was in his second year at Vandy after transferring from Virginia; Foster, Gordon and Alan Metcalfe were third year players who were being counted on to step up; Ross Neltner and Jermaine Beal were in their first eligible years, and the veteran seniors were rangy shooter Dan Cage and low-post mass of humanity Ted Skuchas** who, while solid players, were unlikely leaders for a top tier basketball team.  But when Alan Metcalfe went down with a foot injury early in the season, the team solidified - spare parts became role players, and instead of a bunch of scattered pieces, the 2006/07 Commodores played as a cohesive unit - Gordon and Cage came through with big shots, Metcalfe, Skuchas, and Neltner showed they could lock it down up front, and - most importantly - their play gave Byars and Foster a chance to shine.

The team now took advantage of momentum and could suddenly break teams in big games - the missing piece they'd been lacking earlier in the season.  While Foster/Byars were the focal points of the team, the 'Dores were solid top to bottom because guys who were formerly just decent basketball players were now excellent role players. 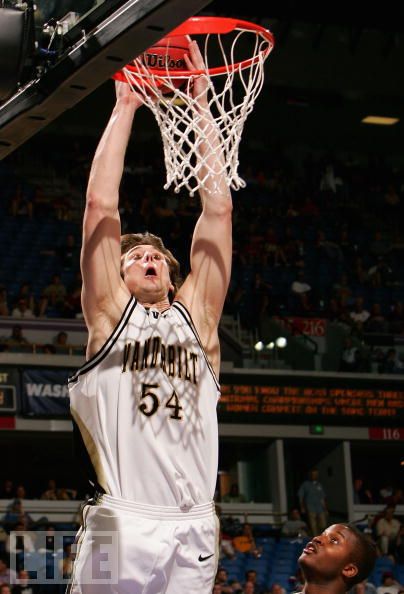 The key to that Sweet Sixteen run.  Even Skuch is surprised that he's dunking.

So what's holding the 2010 Commodores back?  Sure, the team is young, but their cohesion isn't where it should be for a team that's basically had a whole year of playing together.  The leadership is shaky and often Jermaine Beal looks like the only true leader on the court.  Players like Brad Tinsley, Darshawn McClellan, and Lance Goulbourne have yet to figure out where they fit on this year's squad - in short, they're doing too much, and it's preventing the growth this team needs to compete for an SEC crown.   It may be too late for McClellan, but the youngest guys on this squad still have the opportunity to figure out what it takes to make this team win, even if it means reducing their impact in some areas and stepping into a leadership role in others.

This confusion is putting too much pressure on guys like A.J. Ogilvy and Jeff Taylor in big games, and completely disrupts the team's flow, preventing the momentum shifts that the 2006/07 team excelled at.  Something - whether it's a benching, a roster shakeup, or something even bigger - needs to happen to fit these pieces in their right places.

The talent is undoubtedly there - just look at the comparison of rosters:

While I'd take the 2009 roster in terms of pure talent over the 2006 squad, I'd be afraid of turning to the majority of that roster to understand their roles in the final 2:00 of a close SEC game.  Beal, Walker, and Ogilvy - the elder statesmen of the team aren't as much of a concern, but something needs to click for the young guys.  Hopefully the rest of the OOC slate sorts this out so these guys can start playing as a team, and not just a collection of basketball players.  Then I'll finally feel better about a Vandy game outside of Memorial Gym.

**Prior to the 2006 season, Skuch's biggest contribution to the Vanderbilt community were his frequent appearances at Dan McGuinness's and The Stage where, if ever lost or separated from your group of friends, you could text people your location in relation to where the goofy center was dancing - i.e where'd u go?  i'm 20 ft behind skuch on the patio.  His 2007 season changed this.